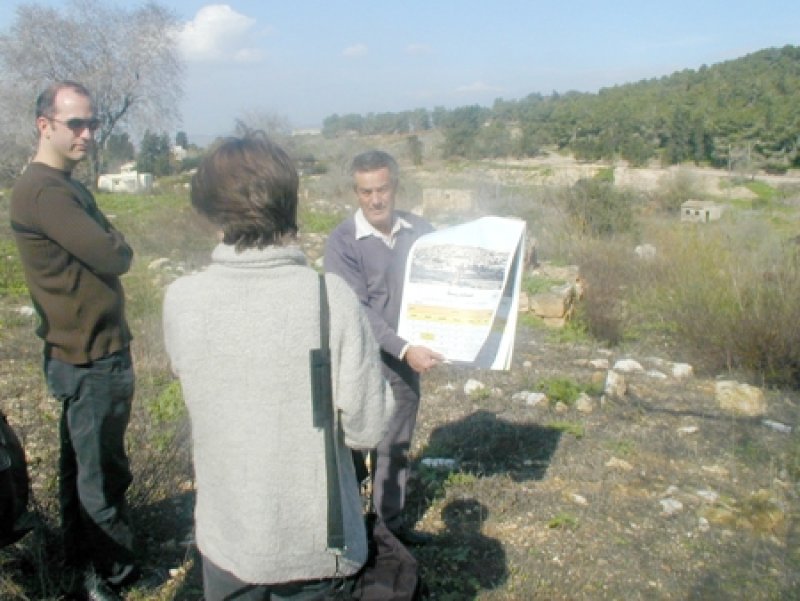 Internally displaced from Safuriya , Abu Arab holds a pre-1948 photo of his toen with the JNF forest that has erplaced in the Background

While the amount of land under Jewish ownership during the period of the British Mandate was no more than 3.5 million dunums, Israel had taken control of about 20 million dunums by the end of the 1948 war. As soon as the land was taken by force, Israel began working on bridging the gap between effective control and legal title to these lands, title which still held by the displaced Palestinians.

To a large extent, Israeli land laws and policies have served the aim of achieving consistency between control and ownership of the occupied Palestinian land. In other words, Israel has undertaken measures which amount to the acquisition of territory by force which is strictly prohibited under international law, and both its legislative and judicial system have played a central role in this context. Although legislation of land laws peaked in the early years of the state, especially the 50s and 60s, it still continues to this day. This is evidenced in the drafting of new laws and reform of existing land laws, including recent changes effected by the 2009 Israel Lands Authority Law and the 2010 amendment of the Land Acquisition Law which are discussed below.

The Keren Kayemet L’Yisrael (KKL), or Jewish Nation Fund (JNF), has been the state’s natural partner in transforming the land of displaced Palestinians into lands “legally owned” by the state and Zionist para-state organizations. Ever since its incorporation as a company in Britain in 1907, the JNF has worked to acquire land in Palestine for Jewish settlement in accordance with its founding principles (article 3a of its Memorandum of Association). The result of this partnership is the Israeli land regime as it exists today.

The JNF in Light of Israeli Law – Special Status

The 1952 World Zionist Organization - Jewish Agency (Status) Law and the 1953 Jewish National Fund Law were passed by the Knesset for the purpose of establishing a special legal status and role for the JNF in development of Israel’s land regime and policy. These laws incorporated the JNF as an Israeli institution and set out its privileges in design and administration of public land in Israel. Soon after the passage of these laws, the state transferred large tracts of displaced Palestinians’ land to the JNF. These lands had been confiscated under the 1950 Absentee Properties Law and the 1953 Acquisition of Land (Validation of Acts and Compensation) Law. These two laws authorized transfer of expropriated land to the “ownership” of Jewish “national institutions,” such as the JNF, via the Development Authority established for this purpose.

Up until 1948, the JNF owned approximately 600,000 dunums of land. After the establishment of the state, and as a result of the transfer of huge amounts of particularly agricultural land, JNF land holdings rose to approximately 2.5 million dunums (13%) of land within Israel’s pre-1967 borders. This means that at least seventy percent of the land held by the JNF is land confiscated from Palestinian refugees and citizens (IDPs and/or so-called present absentees).

In addition to the special status of a private institution with public powers under the 1952 and 1953 laws, the JNF’s most important achievements came in 1960-1961, when Israel’s land regime was formalized through legislation of the Basic Law: Israel Lands, the Israel Land Law and the Israel Lands Administration Law. The Israel Land Administration (renamed Israel Land Authority in 2009) was established on the basis of these laws and controls the vast majority of the land in Israel today.

Based on the above, the ILA administered JNF “owned” lands (13% of the land within the green line) and committed to managing them in accordance with the JNF’s statutory objective, namely the settlement of Jews on these lands. Although most of these lands were confiscated from, and still rightfully belong to, displaced Palestinians, the terms of the law exclude anyone who is not Jewish from benefiting from such land.

Under Israeli law, the ILA is a public institution. It controls approximately 93% of the land in Israel (approximately 19.5 million dunums, including land owned by the state, the Development Authority (13%) and the JNF (13%). The Basic Law: Israel Lands defines this land as “Israel Lands” held in perpetuity for the benefit of the Jewish people.

Along these lines, Israeli law prohibits the transfer of “Israel Lands” through sale or any other way. This prohibition is in line with the JNF statute, which also defines its lands as public, i.e. Jewish “national,” and not private property. Accordingly, the ILA leases land on long term contracts. Up until its 2009 amendment, the Israel Lands Authority Law gave the JNF 50% representation in the ILA administration. This allowed the JNF to become a key player in the process of decision-making and policy setting pertaining to all land administered by the ILA, and not only the portion it “owned” directly.

Recent legislation of the 2009 Israel Lands Authority Law and the amendment of the 2010 Land Acquisition Law introduced changes of the land tenure system in Israel which were met with domestic political opposition. These changes, however, have not weakened the status and role of the JNF, but quite the contrary. In many ways, Israel’s land policy has not changed despite the passage of many years since the establishment of the state, and irrespective of the reality already created by this policy since the 1950s. The impact of recent legislation on the JNF can summarized as follows:

Second: in order to facilitate “development” through the privatization of lands owned by the JNF in urban areas, the state and the JNF will exchange lands. The state will receive JNF land in urban areas which it can then privatize, while the JNF will receive 50-60,000 dunums of land in the Galilee and the Naqab (Negev), both areas with a substantial Palestinian population.

As in the past, the JNF agrees that the new Israel Land Authority will manage its lands, whereas the latter is committed to doing so in line with “the principles of the JNF in regards to its lands” (article 2). In addition, the JNF has committed to contribute 100 million NIS to further development of the Naqab from its own sources.

The new laws are yet another attempt to bypass legal oversight and to legislate against the right to equality in regards to land. The JNF’s statute excludes non-Jews from benefiting from its land. Thus any transfer of public land to the JNF as provided under the law will prevent equal access to land. In other words, the state will be able to “Judaize” more land and discriminate against its non-Jewish citizens in the Naqab and the Galilee by transferring these lands to the JNF.

More in this category: « Insulting the Memory of an Anti-Apartheid Activist Explanatory Diagram:‘Redeeming the National (Jewish) Fund »
back to top