Calling a Spade a Spade:The 1948 Ethnic Cleansing of Palestine 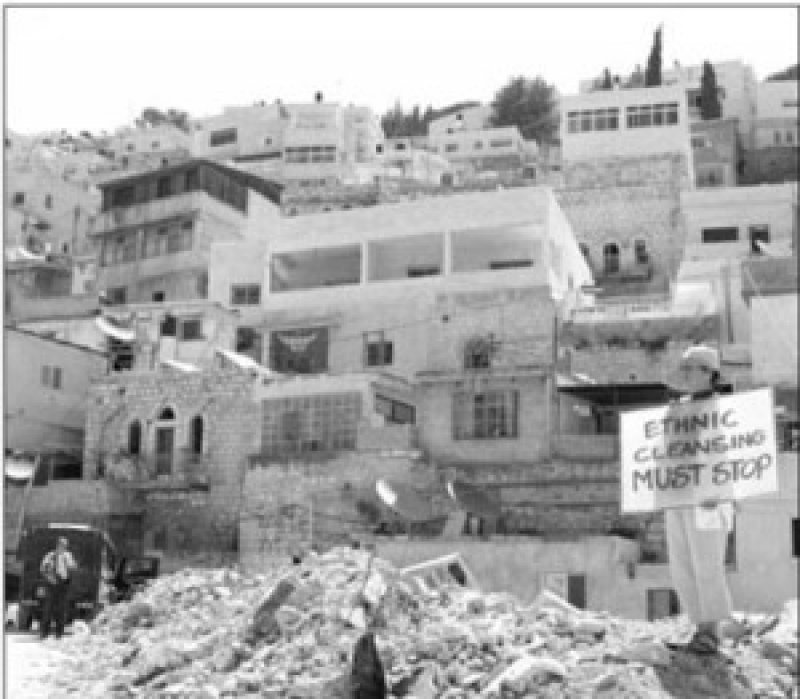 Not so when the term ethnic cleansing is used. It implies an accusation and reference to the culprits of/for the events that took place not only in the past but happen also in the present. Far more importantly, it connects policies, such as ones used to destroy Palestine in 1948, to an ideology which continues to guide Israel’s policies towards the Palestinians: the Nakba continues, or more forcefully and accurately, the ethnic cleansing rages on. In this 58th commemoration of the Nakba, it is time to use openly and without hesitation the term ethnic cleansing as the best possible term for describing the expulsion of the Palestinians in 1948.

Ethnic Cleansing is a crime and those who perpetrate it are criminals. In 1948, the leadership of the Zionist movement, which became the government of Israel, committed a crime against the Palestinian people. The crime was Ethnic Cleansing. This is not a casual term but an indictment with far reaching political, legal and moral implications. The meaning of this term was clarified in the aftermath of the 1990s' civil war in the Balkans. Any action by one ethnic group meant to drive out another ethnic group with the purpose of transforming a mixed ethnic region into a pure one is Ethnic Cleansing. An action can become Ethnic Cleansing regardless of the means employed. Every means, from persuasion and threats to expulsions and mass killings, justifies the attribution of the term to such policies. The act itself qualifies the categorization of the act: therefore, certain policies are regarded as Ethnic Cleansing by the international community even when a master plan for their execution is not found or exposed. Consequently, the victims of Ethnic Cleansing are both people who left out of fear and those expelled forcefully as part on an on-going operation. The above definitions and references can be found in the American State Department and United Nations websites. These are the principal definitions that guided the International Court in The Hague when it was setup to try those responsible for planning and executing the Ethnic Cleansing operations as people guilty of perpetrating crimes against humanity.

In Plan Dalet, adopted in March 1948 by the high command of the Hagana (the main Jewish underground in the pre-state days), the Israeli objective of 1948 is clear. The goal was to take over as much as possible of the territory of Mandatory Palestine and remove most of the Palestinian villages and urban neighborhoods from the coveted territory which would constitute the future Jewish State. The execution was even more systematic and comprehensive than the plan anticipated. In a matter of seven months, 531 villages were destroyed and 11 urban neighborhoods emptied. The mass expulsion was accompanied by massacres, rape and imprisonment of men (defined as males a bove the age often) in labor camps for periods over a year. All these characteristics in the year of 2006 can be only attributed to Ethnic Cleansing policy; namely a policy that, according to the UN definition, aims at transforming a mixed ethnic area into a pure ethnic space, where all means are justified. Such a policy is defined under international law as a crime against humanity which the US State Department believes can only be rectified by the repatriation of all the people who left or were expelled as a result of the ethnic cleansing operations.

The political implications of such a statement is that Israel is exclusively to blame for the making of the Palestinian refugee problem and bears legal, as well as moral responsibility for the problem. The legal implication is that even if there is obsolesce, after such a long period, for those who committed a deed which is described as a crime against humanity, the deed itself is still a crime for which nobody ever was brought to justice. The moral implication is that indeed the Jewish State, like many other states, was born out of sin, but the sin, or the crime, was never admitted. Worse, among certain circles in Israel it is acknowledged and in the same breath fully justified: justified in the past and in the future as a future policy against Palestinians wherever they are.

But all these implications were totally ignored by the Israeli political elite and instead a very different lesson was derived from the events of 1948. The lesson: you can, as a state, expel half of Palestine’s population, destroy half of its villages and get away with it without a scratch or criticism. The consequences of such a lesson were inevitable: the continuation of the Ethnic Cleansing policies by other means. There are well-known landmarks in this process, for instance, the expulsion of tens of villages between 1948 and 1956 from Israel proper, the forced transfer of 300,000 Palestinians from the West Bank and the Gaza Strip and a very measured, but constant, cleansing from the Greater Jerusalem area.

As long as the political lesson is not learned, there will be no solution for the Israeli-Palestinian conflict. The issue of the refugees will repeatedly fail any attempt, successful as it may be in any other parameters, to reconcile the two conflicting parties. This is why it is so important to recognize the 1948 events as an Ethnic Cleansing operation, so as to ensure that a political solution will not evade the root of the conflict, namely, the expulsion of the Palestinians. Such evasions in the past are the main reasons for the collapse of all the previous peace accords.

As long as the legal lesson is not learned – there will always remain retributive impulses and revengeful emotions on the Palestinian side. The legal recognition of the 1948 Nakba as an act of ethnic cleansing would enable a restitutive justice. This is the process that has taken place recently in South Africa. The acknowledgement of past evils is not done in order to bring criminals to justice, but rather in order to bring the crime itself to public attention and trial. The final ruling there will not be retributive, there will be no punishment, but rather restitutive, the victims will be compensated. The most reasonable compensation for the particular case of the Palestinian refugees was stated clearly already in December 1948 by the UN General Assembly in its resolution 194: the unconditional return of the refugees and their families to their homeland (and homes where possible).

As long as the moral lesson is not learned the state of Israel will continue to exist as a hostile enclave in the heart of the Arab world. It will remain the last reminder of the colonialist past that complicates not only Israeli relationships with Palestinians, but with the Arab world as a whole. And, because the moral lesson is not fully comprehended, there exists in Israel justifications for Ethnic Cleansing both in 1948 and its current forms.

When and how can we hope for these lessons to be learned and influence the effort to bring peace and reconciliation in Palestine? First, of course, not much can be expected to happen as long as the present brutal phase of the occupation of the West Bank and the Gaza Strip continues. And the effort to locate the 1948 ethnic cleansing at the center of the world's attention and consciousness must continue, alongside the struggle against the occupation, including tactic of BDS (Boycott, Divestment and Sanctions) being adopted as the main strategy by civil society in the Occupied Territories and by the international solidarity movement. This effort can not be limited to one place. The place where the Ethnic Cleansing of 1948 occurred, Israel of today, is totally excluded from this enterprise. The work to raise attention and consciousness inside the land of the Nakba should continue and be coordinated with Palestinians and those who support them. With the help of Badil and other organizations, the Palestinian refugees in Israel, Internally Displaced Persons, and other leading Palestinian NGOs in Israel, cooperated with a group of Jewish activists to initiate a serious attempt to bring Ethnic Cleansing to the attention of the public and argue forcefully and without any hesitation for the implementation of the Palestinian right of return.

In two conferences supporting the right of return, Palestinian and Jewish researchers and activists publicly aired their findingsabouttheethniccleansingfrom1948untiltodayandpresented their ideas on how best to move forward in educating public opinion about the disastrous implications – for Palestinians and Jews alike, indeed for the world at large – of the continued denial of the 1948 Ethnic Cleansing and the refusal to accept the internationally recognized Right of Return.

On the 58th anniversary and in preparation for the 60th anniversary we – Palestinians, Israelis and whoever cares for this land – should demand that the 1948 crime against humanity be included in everyone’s history books so as to stop the present crimes from continuing before it is too late.

* Dr. Ilan Pappe is a senior lecturer in the college of political sciences at the University of Haifa. He is also the head of the Emile Touma Institute for Palestinian and Israeli Studies, Haifa. Dr. Pappe is considered one of the new Israeli historians.

More in this category: « Beautiful Resistance, Revolting Memory 1948in Palestine and South Africa »
back to top