Using other forms of resistance 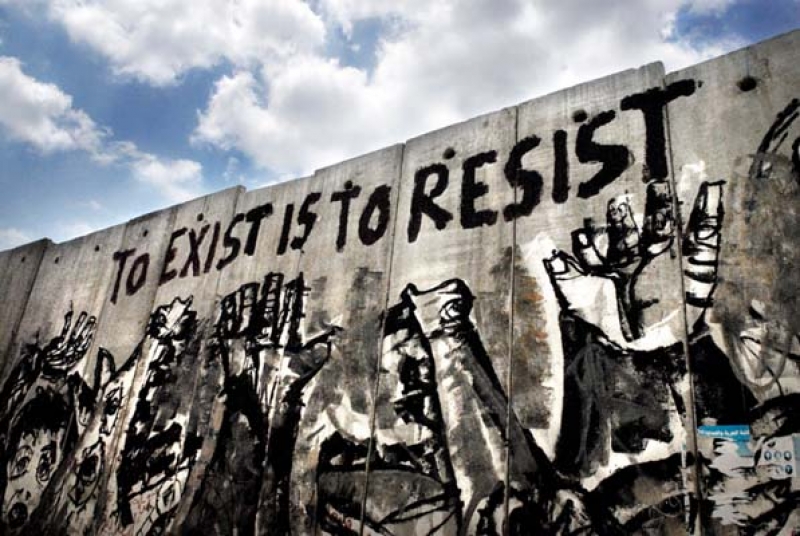 The Separation and Annexation Wall near Ramallah 2013 (© RW\BADL)

Other forms of resistance was the fourth most prefered pathway chosen by Palestinian refugees (41.8%); see p.5

Surely, few observers can claim to be surprised by the call from Palestinian refugees for a rethink as to the ways in which a permanent solution to the refugee crisis is to be achieved?

It is, of course, true that formal, legal frameworks exist which could adequately address the Israel-Palestine crisis, and its attendant mass, forced displacement of Palestinians; displacement evident both within the boundaries of  Historic Palestine and beyond. Indeed, the total combined population of Palestinian refugees and IDPs now stands at some 7.9 million, representing the single largest refugee population on the planet.[1] Such frameworks are constructed from assorted instruments of international law, including treaty, statute and UN resolutions.[2] The common characteristic of such instruments is their focus on the respect for and protection of human rights, and in adopting such a focus, these essential universal principles are elevated above the muddied and treacherous waters of political expediency. Yet, in the case of Palestinian displacement, these frameworks continue to be abused or, more commonly, neglected altogether by international power brokers.[3]

Chief among these abject failures is the continued refusal of the international community to actively pursue the implementation of UN resolutions which call for the return of Palestinian refugees to the homes from which they were forcibly displaced during the 1948 and 1967 Wars.[4] Not only does this serve to perpetuate the suffering of the displaced and the continued denial of their fundamental rights, but it also sets an ugly and dangerous precedent. Each additional day of Palestinian exile further highlights a tacit acceptance by the international community of the concept of conquest by force, and contributes to a steady, incremental undermining of the relevance of international law.

As an attempted substitute for the proper application of existing legal frameworks, came the Oslo Accords[5]; the child of extensive political wrangling which afforded primacy to the strategic goals of Israel and its benefactors at the expense of the Palestinian people and their inalienable right to self-determination.[6] The result was an agreement which served only to entrench Israeli domination of Palestinian space, fracturing the West Bank into an archipelago of disparate Bantustans and facilitating Israel’s continued colonization of Area C, with the number of Jewish-Israeli settlers/colonizers inside the occupied Palestinian territory (oPt) now numbering greatly in excess of half a million.[7] Far from bestowing upon Israel a temporary, custodial role over occupied territory, Oslo has in fact allowed Israeli authorities to actively pursue a demonstrably colonialist agenda; to assume de facto sovereignty over Area C and steadily remove from this land all Palestinian presence.[8]

To this end, complete control is achieved and maintained by Israel’s sprawling ‘security’ apparatus, manifested in fixed and ‘flying’ checkpoints; an extensive and discriminatory permit regime[9], and the regular use of extreme physical and psychological violence against the Palestinian populace. It is an entirely punitive system, and quality of life has been eroded so grievously by these political agreements that, for many Palestinians, the Oslo Accords have come to represent a second Nakba.[10]

Given this landscape of inequality and despair, and the best efforts of the international community to reduce Palestinians to mere spectators as their land and rights are wrestled from them, it is inevitable that, from the aggrieved, will come concerted calls for an alternative; for grassroots change; for popular resistance.

Perhaps the most obvious example is the recent increase in the number of youth protests throughout the oPt. This increase highlights a growing sense of alienation and disenfranchisement among Palestinians. Indeed, the majority of those who take to the streets to protest and face-off against the might of the Middle East’s most formidable military belong to the ‘Oslo generation’, with their future prospects strangled and suffocated from birth by the pervasive reach of Israel’s occupation. In protesting, however, they are empowered and afforded a degree of agency. [11]

The same can be said of recent attacks by Palestinians directed at Israelis. Such attacks cannot – despite the attempts of Israeli politicians – be in any way divorced from the horrendous suffering inflicted upon the occupied Palestinian populace over a period spanning some seven decades. Rather, these attacks are the natural result of a severe and prolonged deprivation of human rights, coupled with an absence of any effective legal recourse. Indeed, such cause and effect – and the legitimacy of armed resistance in specific scenarios of belligerent occupation - finds recognition in resolutions issued by the United Nations. For instance, General Assembly Resolution A/RES/3246 (XXIX) of 29 November 1974 “[r]eaffirms the legitimacy of the peoples’ struggle for liberation from colonial and foreign domination and alien subjugation by all available means, including armed struggle.”[12]

This provision is, of course, conditional, with any act required to be conducted in adherence with International Humanitarian Law if it is to qualify as a form of legitimate armed resistance. It is also to be noted that UN resolutions are not legally binding per se, though they should be considered as reflecting the dominant legal rationale among sovereign states.

What becomes clear, then, is that armed struggle is, if performed in accordance with the laws of warfare, a legitimate option for the Palestinian people to exercise in their resistance of Israel’s colonialist project (a point conspicuous by its absence from both the dominant political discourse and international media coverage regarding the situation inside the oPt). However, such acts are undertaken largely on account of there being no effective alternative, and those Palestinians who engage in direct confrontation with the occupying power do so in the knowledge that the price they may pay for such agency is extremely high.[13] In October and November 2015[14], more than 100 Palestinians have been killed by the Israeli military or paramilitary police units, with lethal force having become deployed so commonly that leading human rights groups have raised concerns that such practices form part of an Israeli policy of extrajudicial execution.[15] And, yet, this confrontation continues.

Such resistance is, therefore, indicative of both desperation and hope; ‘desperation’ insofar as young men and women, feeling abandoned by the international community and the Palestinian political leadership[16], continue to engage in forms of resistance which may result in their own death or maiming, and ‘hope’ insofar as such acts demonstrate an enduring and powerful collective will on behalf of Palestinians to reject ‘victim’ status, as well as a refusal to accept their exile as a permanent phenomenon. It is truly remarkable, given the duration of this exile, as well as the physical separation which exists between the Oslo generation and their ancestral lands and communities – a separation now emphatically embodied by eight vertical meters of concrete and hundreds of miles of tumbling razor wire - that this attachment remains unbroken.

Nor is this attachment monopolized by Palestinian youth, or manifested solely in physical confrontation. Even the briefest period spent inside the oPt will expose the visitor to a broad and innovative range of grassroots, popular resistance efforts - led and backed by a broad cross-section of Palestinian society - which seek to maintain and foster mental links to the homeland; to raise awareness of the inalienable right of Palestinians to return to their homes from which they have been forcibly displaced, and to pursue the realization of this right. Efforts such as these are to be encouraged, and alternative pathways to a durable solution – whatever form they may take – must be born of, and driven by, the Palestinian people. Indeed, the fortitude and innovation required to develop such pathways have always been resources of great natural abundance inside the oPt.

However, today, the rich potential of these reserves remains unrealized. This can be explained to a large degree by the absence of dynamic, principled leadership at the national level, resulting in a failure to interweave these separate strands of resistance into a single thread[17]. At present, Palestine possesses the requisite components, but lacks the leadership to manufacture the end product. What is urgently required is the marriage of this resistance culture with political direction, and the onus must be on the Palestinian Liberation Organization and the Palestinian Authority to take the lead on such an undertaking.

Yet, any push for action on the domestic front must operate in conjunction with a concerted application of pressure on the international community to fulfill their legal and moral obligations, and it speaks volumes that Palestinian refugees are now forced to consider alternative forms of resistance in the pursuit of a durable solution to their collective, protracted exile. This is a decision which has been made on their behalf by the insistence of third party states and other influential, external actors to support a long-defunct ‘peace’ process rather than seek to realize, via existing, purpose-built legal frameworks, those fundamental rights to which Palestinians are entitled.

Ultimately, popular resistance can – and should – play a key role in the pursuit of a durable solution to the Palestinian refugee crisis, but fostering of this collective will must be considered as a supplement, rather than a substitute, to the enforcing of third party obligations – and the protection of human rights - at the international level. Failure to do so is to place the burden of a solution upon the shoulders of the victims themselves, and to perpetuate the world’s longest-standing refugee crisis and its associated suffering.

----------------------
*          Simon Reynolds is the Legal Advocacy Coordinator at the BADIL Resource Center for Palestinian Residency and Refugee Rights. He has a Bachelor’s degree in Law, and a Master’s degree in post-war recovery studies.

[5]    Declaration of Principles on Interim Self-Government Arrangements ("Oslo Agreement"), September 13,  1993. Available at: http://www.refworld.org/docid/3de5e96e4.html [accessed February 9, 2016]; Interim Agreement on the West Bank and on the Gaza Strip ("Oslo II Agreement"), September 28, 1995. Available at: http://www.refworld.org/docid/3de5ebbc0.html [Accessed February 9, 2016]; UN Security Council. October 22, 1973. Resolution 338 on a cease-fire in the Middle-East.S/RES/338. http://www.un.org/en/ga/search/view_doc.asp?symbol=S/RES/338(1973) [Accessed February 10, 2016]; UN Security Council. November 22, 1967. Resolution 242 on the Middle East.S/RES/242. Available at: http://www.un.org/en/ga/search/view_doc.asp?symbol=S/RES/242(1967) [Accessed February 10, 2016].
The Oslo Accords are often mentioned in the frame of the 'Oslo process'. This indicates the period in the run to the agreement between the Palestine Liberation Organization (PLO) and Israel in 1993, the Gaza-Jericho Agreement in 1994 and the second interim agreement in 1995. This process used to be applauded as a means to achieve a peace-treaty based on the UN Security Council Resolutions 242 and 338 – a concept that does not cover the subsequent realities, since Israel never recognized a core prerequisite of the negotiations, which is the right of the Palestinian people to self-determination. Palestinian youth that grew up under the Israeli non-implementation of negotiated provisions and ongoing compartmentation of the West Bank – that comes with colony expansion and forced transfer of people as well as denial of the right of return and other basic human rights – are indicated with the term "peace process generation" or "Oslo generation".

More in this category: « The ICC and the ‘Situation in Palestine’: Political Sensibilities and Procedural Hurdles The imperative of building Palestinian representative institutions »
back to top