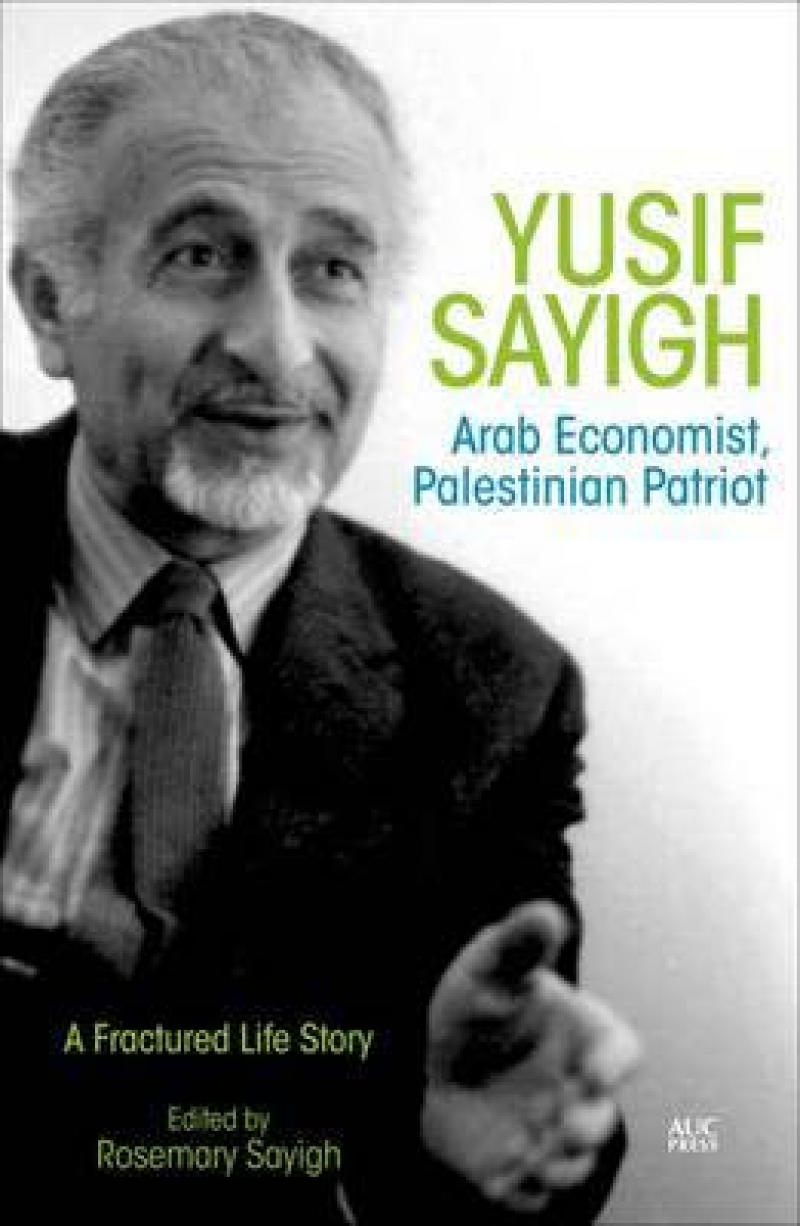 Yusif Sayigh (1916 – 2014) is widely known as an expert on Arab economic development, as former Director of the Economic Research Institute and Chairman of the Economics Department at the American University of Beirut (AUB), and for his work with the Palestinian Liberation Organization (PLO) on strategic planning of resistance and economic development, including creation of PEDRA (Palestine Economic Development and Reconstruction Agency, later PECDAR). Compiled and edited by Rosemary Sayigh, anthropologist and Yusif’s partner in life for more than five decades, with the compassion for people and the ordinary that is characteristic of her oral history work,[1] the memoirs of YusifSayigh are, however, more than just another biography of a public figure.


The trajectory of childhood and youth that emerges from the memoirs, for example, is a strong reminder of the freedom of movement and mobility that was quite common even for a village boy in historic Palestine which, despite all arbitrary Western colonial redesign, was still part of Bilad al-Sham (Greater Syria). From Kharbata (Syria) where the Sayigh family had set up home and the father, a pastor, ran his parish, we follow Yusif back to his village of birth, al-Bassa (Palestine), to boarding school in Sidon (Lebanon), to Beirut, where Yusif attends university and the entire family obtains Lebanese citizenship simply because a family visit coincides with a call for registration, and on to Tiberias (Palestine), Tikrit (Iraq) and Jerusalem (Palestine) for work that is to help finance his brothers’ education, political activism, and professional engagement in Arab economic resistance against the Zionist colonization of Palestine.

Yusif’s stories of boyhood and family life also show vividly that early 20th century Palestinian society was not homogenously stagnant, conservative and caught up in poverty and religious traditions.  There is Yusif’s mother protecting her children from the father’s rigid Protestant discipline, and there is the story of her courageous decision to pack up the family in the absence of her husband, and flee the barren Syrian Kharbata during the 1923 Druze uprising against French colonialism, in order to return to al-Bassa, escape poverty and secure modern education for her children. Through Yousif’s fond and detailed memories, al-Bassa, the village on Palestine’s fertile northern Mediterranean coast and its community of Muslims and Christians, is revived as a place of liberal social traditions, fruit and tobacco plantations and first adventures in sexuality and romance.
Stories recounted about university studies at the AUB (1934 – 38) convey the intensity of intellectual debate between “Arab nationalist” and “(Greater) Syrian nationalists” about the preferred post-colonial order for the Arab world. We find Yusif engaged in discussion with admired leaders of both of these competing streams of political thought, becoming politicized, and eventually joining the Syrian Social Nationalist Party (SSNP), because of the party’s secular vision and praxis of resistance against colonial rule. Through chapters 5 to 8, we follow Yusif’s involvement with the SSNPand its leader AntunSaadeh, which eventually ends in frustration with secret political parties and their un-transparent mode of action that would keep him from joining another political party for the remainder of his life.

The Nakba has the Sayigh family seek refuge in Beirut. Yusif himself is captured together with other young men in Jerusalem in May 1948 by a Zionist militia. The chapter entitled “Prisoner of War”, is a rare and vivid testimony of hunger and summary executions in Israeli make-shift detention camps, of Yusif’s pleas for protected prisoner of war status for Palestinian civilians like himself and his companions, and of relief at the appearance of the International Red Cross.[2] Striking in hindsight is the manner in which Yusif recounts his deportation from Jerusalem in the spring of 1949: it is a story of release from Israeli detention and of reunion with friends, comrades, colleagues and family, first in eastern Jerusalem, then in Amman and Beirut. Is it because this deportation, which would turn into permanent exile, is too painful to be remembered? Or is it at that time simply not a memorable incident for the prisoner who, released into the Bilad al-Sham of his youth, would immediately resume political and academic engagement for a better post-colonial Arab world that included Palestine?

As pointed out by the editor, there are also many questions younger generations would want to pose to Dr. Yusif about his work with the PLO, beginning with the first session of the Palestinian National Council (PNC) in the early 1960s and lasting until shortly after the singing of the Oslo accords in the mid-1990s. The stories recounted in chapter 12 show the Palestinian scholar working relentlessly – and ultimately failing - to insert strategic planning and transparency into what he calls an “unorganized Palestinian resistance movement”, or, later, to overcome narrow partisan interests for the benefit of a scientific economic development plan for the Palestinian state. The principle that politics is to create the conditions for Arab, including Palestinian, post-colonial economic development, and that economic development involves social justice, had been constants in YusifSayigh’s work as an economist since his first notable book, Bread with Dignity (1961). An overview of the academic achievements and legacy of this pioneer scholar and teacher of economics in the Arab world is provided by the editor in the final chapter of the book.

[1]    Rosemary Sayigh, From Peasants to Revolutionaries (1979), and, Too Many Enemies(1994), representing milestones in oral history work about the experience of Palestinian refugees exiled in Lebanon.

[2]    For a recent study featuring Yusif Sayigh’s and similar first-hand accounts and reflecting critically on the role of the ICRC, see: Salman Abu Sitta and Terry Rempel, “The ICRC and the Detention of Palestinian Civilians in Israel’s 1948 POW/Labor Camps during the 1948 War”, Journal of Palestine Studies Vol. XLIII, No. 4 (Summer 2014).

More in this category: « The imperative of building Palestinian representative institutions I wish some heavy rain »
back to top