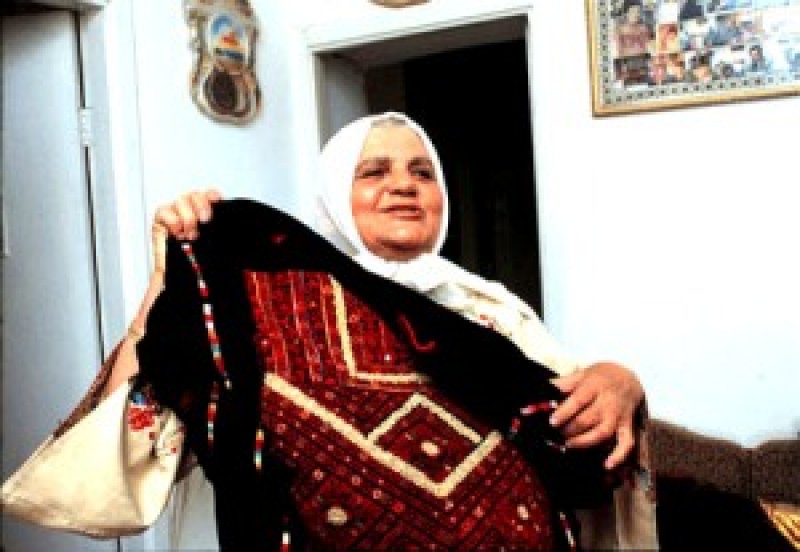 I had my head on somebody’s lap, and I remember looking at the stars. The world seemed so big – like leaving your home which is small and structured, and going into the big wide world. It was very scary. But at the same time, as a little child, even then, looking at the sky and the stars, I was wondering what was going to happen.

Suad Andraos – exiled as a child from Jaffa

Suad Andraos and her two sisters Leila and Widad are three of seventy women (and a number of men) voicing their displacement across hours of recording directly accessible on a new internet voice archive. From 90 year old Hajjah Rafiqa Sleimi in the ground floor of the Jerusalem Old City home where Jewish settlers squat on the top floors,toUmmMuhammadwhoranfrom1948 Beersheba under gunfire, able to save her children by tying their arms around her neck, these displaced voices form an invaluable new national archive.

The project emerged from recordings made by Rosemary Sayigh during several visits to different regions of historic Palestine between 1998 and 2000. Having done much to promote oral history methodology in studies of Palestinian history and politics in earlier works based in the Lebanese camps, with this project the author addresses women displaced but remaining in historic Palestine.

As explored by several authors in Al-Majdal’s recent special issue (32), oral history methodology enables the voices of women, rural and refugee communities, all those marginalised by written histories of military and political elites, to become central to an understanding of Palestinian community history. With this latest work, an ‘e-book’ seemed the most appropriate forum to present these voices, both allowing an audience to listen to and engage with the narrative, and forming a permanent national archive. While including links to the author’s thoughts and reflections, unlike traditional written texts in which short interview clips are all too often submerged in academic theory, Voices allows the audience to actively listen themselves.

…The Jews threw me out, they threw me out twice. But I stayed. And I am sitting here firmly on top of their hearts. Here I am.

What is displacement (Arabic: tahweel, tahjeer)? How many forms can it take? In a detailed introduction Sayigh explains that she searched for speakers who had been displaced in one of several ways – through expulsion, deportation, home demolition, imprisonment – but she allows the speakers to define the concept for themselves. Although the recordings were made before the latest phase of Israeli repressive measures, (sadly) the stories are not dated – there is something timeless about these accounts of displacement. Umm Kassem al-Azrak of Aida Camp has moved 30 times since exile from her village - her house was destroyed when her daughter was imprisoned, three sons were also imprisoned and a daughter-in-law killed. Suhayla of Bir ‘Ona and Hajjah Aysha Aqel of Sheikh Jarrah describe their constant struggle and fears of housing demolition. Na'ima al-Helou of Jabaliya camp describes regular imprisonment which Sayigh terms ‘the most extreme type of coercive displacement’. These stories could be from any decade of Israeli occupation.

A key strength of this project is its inclusive nature - women have been selected from very different geographic regions, and various educational, political and class backgrounds. A notable inclusion is two groups often sidelined - Palestinian women living inside Israel, the part of Palestine occupied in 1948, and Palestinian Bedouin women. All too often academics and activists alike, for political reasons or lack of awareness and communication, have difficulties with inclusion of Palestinian women today living with Israeli citizenship. Owing to their marginal status to central Palestinian politics and difficulty of access to unrecognized villages, the lives of Bedouin women are too often excluded, or set aside as a ‘separate’ category. In the Voices archive, these women fit seamlessly alongside others of the West Bank, Gaza and Jerusalem as an integral part of the Palestinian nation.

I had come to the conclusion that displacement was the defining experience of the Palestinian people in modern times. The aim of the voice archive would be to offer evidence of different forms and contexts; how women have experienced displacement; how they narrate it; how they integrate displacement into larger narratives of 'destiny'; and how their stories differ from those of men.

Introduction to the Voice Archive:

Why Palestinians? Why Displacement? Why Women?

When engaging with the voices of the archive, take time for the author’s introduction which not only details the genesis of this particular project, but critically reflects on the development of her own thought process and the powerful influence of four Palestinian women exiled in Lebanon, including the memory of her own mother-in-law from the northern Galilee village of al-Bassa.

Because of these women, I could never have approached Palestinian women simply as victims, whether of Israeli aggression or Arab societal patriarchy. Nor could I view them as in need of 'empowerment' from Western women.

Sayigh’s personal reflections begin with her own arrival in Beirut less than a decade after the Nakba, having married into a family exiled from Tiberias. She describes how in early days ‘most exiles covered their wounds with silence’, and that despite marriage into a Palestinian family, it was many years before she became aware of the depth of the rupture and devastation caused by 1948 - ‘Looking back, I realize also that I didn’t have the right questions; and if you don’t ask the right questions, people are not going to tell you.’

Registering at the university in the early 1970s to study anthropology, the author began to stay in Dbeyeh camp with Umm Joseph, a cousin of her late mother-in-law. Some 15 kilometres north of Beirut in a predominantly Maronite area, Dbeyeh camp was to be destroyed by Lebanese militia in the civil war. It was here in Dbeyeh, while initially perceiving such stays as ‘field research’, that Sayigh sees herself as beginning to understand the lived experience of the Nakba and the ways that loss of land and home had ruptured lives of Palestinian villagers – a history that the geo-social separation between the urban middle class of Beirut and the rural camps had allowed her to remain ignorant of. ‘I just sat and listened to stories of the peasant past and refugee present. At the time I thought of this as 'participant/observation'; later I realized it was just a beginning of living with Palestinians.’

Sayigh’s insightful work since the 1970s has included important anthropological and sociological observations, contributing to an understanding of gender relations, child upbringing and refugee lifestyle. Yet crucially, her work is never divorced from the political context. How would it be possible to reflect upon the social position and vulnerabilities of Palestinian women without understanding the context of displacement in which they live? How could one truly understand the lives of Palestinian women without a grasp on the social and political devastation caused by the 1948 Nakba and continually since that time? How could this possibly be a political sphere which is somehow separate from social relations? The author voices her own anger at the academic trend of considering changes and development in Palestinian women’s lives purely through a paradigm of progressive modernization, without considering the context of decades of upheaval that the national community has undergone through this time.

In short this new archive is an invaluable source for national, activist and academic purposes. Illustrated by well chosen photographs both of speakers themselves and the surroundings in which they live, the site is easy to find one’s way around, even for those not proficient in new media. Recordings can be downloaded at the click of a button without complicated installation processes. While the vast majority of interviews are in Arabic, the archive remains useful for those with poor or no Arabic – the Andraos sisters of Jaffa and Marie Sarraf of Gaza City chose to speak in English. Sayigh also includes Australian Jean Calder, who has three adopted Palestinian children and recorded in her Gaza home – (earlier having been deported from Lebanon)- demonstrating the author’s belief that being Palestinian can also be a political as well as biological choice. Opening paragraphs to all interviews are also translated into English.

The beauty of an e-book is that it can be continually added to – the author is working on further text on life in each of the four geographic areas from which the speakers come. Bookmark the site now: http://almashriq.hiof.no/palestine/300/301/voices/index.html

More in this category: « One Year After: Update on the Situation in Al Aqaba and Yanoun Villages BDS UPDATE (Mid-July to Mid-November 2007) »
back to top