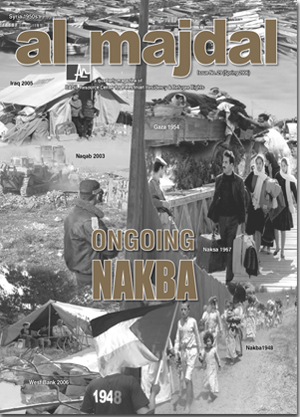 Reports and analysis in this issue show how commemorations of the Nakba bind together Palestinians in Israel, the occupied Palestinian territories and in forced exile and serve to strengthen the collective consciousness and political will of a people determined to continue the struggle from generation to generation.

Other authors raise the need to understand the Nakba of 1948 as a phenomenon of ethnic cleansing, reflect on the importance of the year 1948 for both South Africans and the Palestinian people as the year in which British colonialism created the conditions for the birth of Apartheid South Africa and Apartheid Israel, and examine the role of the Church in (de)constructing apartheid and colonization in Palestine.

Additional aspects of the 'ongoing Nakba' are addressed by a discussion of the role of humanitarianism which has become the primary manifestation of international political will as donor states condition aid to Palestinians on Palestinian acquiescence to conditions that Israel itself has yet to fully accept, and by reports of ongoing forced displacement of Palestinians in the Naqab (Negev), Iraq and in Europe as a result of Israel's discriminatory policies and lack of effective protection by host states and the international community.

General articles include analysis of the ideological positions of Israeli political parties based on their campaigns for the recent parliamentary elections, and a report about the current situation of Bhutanese refugees after 15 years in exile.

An update of recent developments in the global civil society campaign for boycott, devistmend and sanctions against Israel (BDS) and a statement to BADIL from the Green Party USA commemorating the 58th anniversary of the Palestinian Nakba are included in the document section.

The Nakba (catastrophe) stands for the destruction of the economic, social, political and cultural fabric of Palestinian society in 1948, when the western powers of the time permitted and encouraged, in violation of international law, the replacement of Palestine by a colonial settler state, i.e. the state of Israel. 58 years later, in May 2006, while Israel and the international community are again set to destroy Palestinian society, Palestinians commemorate the Nakba of the past and the Nakba of the present.  The international community created the Palestinian Authority as a step towards the self-determination of the Palestinian people. Today, however, it is on the verge of causing a humanitarian crisis and destroying the embryonic state institutions it created in order to impose a vision of Palestine that disregards international law and the fundamental rights of the Palestinian people. Canada, the United States, the European Union, the Quartet and Norway decided to sanction the democratically elected Palestinian government in order to induce Hamas' acceptance of the principle of nonviolence, recognition of Israel, and acceptance of previous agreements and obligations, including the Road Map, i.e. conditions that most Israeli political parties have failed to meet. (See article by Nabih Bashir, Israeli political parties' ideological projects and inclinations towards the conflict).

In the last week of April 1948, combined Irgun-Haganah forces launched an offensive to drive the Palestinian people out of the beautiful port city of Jaffa, forcing the remaining inhabitants to flee by sea to Gaza or Lebanon; many drowned in the process. My Aunt Rose, a teenager at that time, survived the trip to began her life in exile on the shores of the Lebanese coast.

Each Palestinian refugee family grows up hearing again and again the stories of those final moments in Palestine, the decisions, the panic, as we live in the midst of their than 50 massacres carried out over the summer of 1948 by various armed Jewish forces as a means to drive out others who were determined to stay, the physical demolition of the villages after the expulsions occurred to ensure the refugees could not return, all this is summed up in a single word for Palestinians - Nakba, the catastrophe.

Commentary:Donor Aid, UNRWA, and the End of a Two-State Solution?

Humanitarianism has often been a surrogate for effective international action to end the Israeli-Palestinian conflict.(1) Political intervention to ensure the voluntary return of Palestinian refugees after the 1948 war, for example, eventually gave way to a program of long term assistance. More recently, emergency relief programs in the West Bank and Gaza Strip have all but superseded efforts to end Israel’s protracted military occupation.

With the political and economic isolation of the Palestinian Authority (PA) following the January 2006 elections in the 1967 occupied Palestinian territories (OPTs), however, humanitarianism has been transformed into the primary manifestation of international political will as donor states condition additional aid (beyond that required to keep Palestinians alive) on Palestinian acquiescence to conditions that Israel itself has yet to fully accept.

I was born Palestinian and I don’t want to do anything to change this.
I was born in a refugee camp, in my own country, and there is nothing I can do about it.
I was born under occupation, and I will do everything possible or impossible to change this.

The culture and history of nations is probably measured through what they show and what they are able to communicate to the rest of the world.

Calling a Spade a Spade:The 1948 Ethnic Cleansing of Palestine

The editors have asked me to address “the role of the church in constructing and de-constructing colonization/apartheid in Palestine.” I’ll narrow this topic somewhat by focusing on Western Christianity, as it has been most complicit in the colonization of Palestine. I will not discuss, but instead will note upfront, the important role that the Palestinian churches and church-related organizations have played and continue to play in countering the dispossession of the Palestinian people.

Most recently, for example, some Palestinian church-related organizations have been active in the Palestinian civil society call for boycott, divestment, and sanctions, or BDS. I will also not examine the complex relationship of Christianity in the global south to Zionism and the anti-colonization struggle in Palestine.

The simple thing to do would be to contrast two phenomena within the Western Christian world. On the one hand, one has Christian Zionism, with its luminaries (e.g., Jerry Falwell, Tim LaHaye, Pat Robertson), political action committees (such as the recently announced initiative to create a Christian equivalent of AIPAC to lobby the US government), and pop culture (for example, the wildly popular Left Behind novels). All components of Christian Zionism are informed by a particular theology (termed premillennial dispensationalism) that reads the biblical story as pointing towards an apocalyptic end of history in which the founding of the State of Israel and the in-gathering of the exiled Jewish people plays a decisive role in precipitating the last battle of Armageddon in which the anti-Christ/Satan is decisively defeated.

I prayed that I had not understood. “Did they burn his house, or his body?” Please God let it be just his house, I prayed.

“His body,” said Musa. “He was in the hospital for a week, but he died. He had four children. Do you see what happens to us in Iraq?”

The Naqab (Negev) Under the Microscope: Roots, Reality, Destiny

These eyes gazing at the Naqab, gazing at home in longing, passion and pain. They are the eyes of the natives, the original people of the home and the land holding tight to its past, present and future. Greedy are the eyes of the authority, desiring to end life in the Naqab, as it is currently lived, to uproot its people and fence them in Ghettos.

The area is restricted under the pretence of development and civilizing the Bedouins. This tragedy is part of the discourse of the ongoing Nakba; they all became refugees and displaced overnight.

Numerous Arab and foreign studies allocate great importance to the situation of Palestinians in host countries, notably in countries neighboring Palestine. This importance may be related to the high number of Palestinians residing in those countries, such as Jordan; the implications of a resolution of the conflict, including the refugee question; and, the role that these countries may play in regional and international fora.

The Green Party of the United States joins the peace-seeking community worldwide in commemorating the 58th anniversary of the Palestinian Nakba.

We are part of a global Green movement, made up of more than 100 national Green parties throughout the world. Sharing a vision of ecological wisdom, democracy, human rights, and peace/non-violence, Green parties have emerged throughout the Americas, Africa, Asia, Europe, and the Pacific.

Washington, DC – The Palestine Solidarity Movement (PSM) held a successful National Day of Divestment Action on March 30, 2006 – otherwise known to Palestinians as Yom al-Ard, or Land Day. On this date in 1976, six unarmed Palestinian citizens of Israel were killed in the villages of Arrabeh and Sakhnin while the Israeli government expropriated their lands.

Israeli political parties' ideological projects and inclinations towards the conflict

Israeli political parties, despite their various shades and colors, all posses ideology rooted in Zionist ideological thought; a thought that pre-exists the state of Israel. This ideology is the main window from which reality, history and future is conceived. Like every other ideology, Zionism is more than an invariable political cultural platform. It is a system of thoughts, which relies and feeds on a continuous interpretation of history, reality, and vision of the future, although the main ideological pillars of Zionism remain unchanged; impermeable.

More 105,000 Bhutanese refugees are becoming stateless after 15 years in Exile

Today more than one-sixth of Bhutanese citizens have been evicted from their country and forced to become refugees. If safeguards are not provided, they will become stateless.Over105,000 southern Bhutanese citizens live as refugees in camps in eastern Nepal and another 30-35,000 are scattered outside the refugee camps in Nepal and northern India.

Closing the Gap, Handbook on Protection of Palestinian Refugees in States Signatories to the 1951 Refugee Convention