Simone O'Broin
Israel and the Crime of Apartheid: The Vision of the Anti-Apartheid Struggle (Issue No.48, Winter 2012) 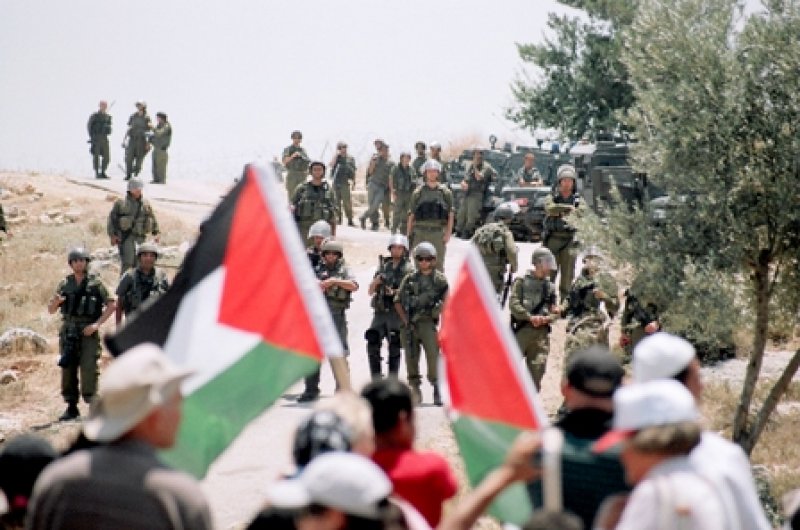 Palestinians and International Solidarity members during the weekly protest against the Apartheid Wall on the land of Ni'lin, Ramallah, West Bank. October 2009 (photo: Hindi Musleh/BADIL)

It is likely, therefore, that in any situation of prolonged occupation, resistance will occur, whether it be violent or non-violent.3 The general prohibition in international law on the threat or use of force4, is reaffirmed in the Declaration on Principles of International Law concerning Friendly Relations and Co-operation among States5 which states that:

In their actions against and resistance to such forcible action in pursuit of the exercise of their right to self-determination, such peoples are entitled to seek and to receive support in accordance with the purposes and principles of the Charter.

It is clear from this paragraph that all forms of non-violent resistance including boycotts, strikes, political opposition, civil disobedience and other non-violent means are permissible in a struggle for self-determination. Richard Falk, Special Rapporteur on the situation of human rights in the Palestinian Territories, is of the opinion that"reliance on symbolic and low-tech violence (stone-throwing), especially if directed at military or illegal settler personnel, seems clearly to be permissible given the present conditions of occupation."6

It is more controversial whether or not the use of armed force is allowed in resisting occupation, colonialism and apartheid in the context of a national liberation struggle.The Israeli occupation has systematically and deliberately violated many aspects of international humanitarian law and human rights law which should be upheld by the occupier. It is also the case that the international community has repeatedly affirmed the Palestinians' rights in the key disputed issues – the right to a State alongside Israel,7their right of return and compensation,8their right to have Israel withdraw from the OPT9 and their right of self-determination.10These affirmations of support from the UN of the Palestinian rights strongly suggest that the cause of the Palestinians is a just one, in line with just war doctrine, which then implies a moral duty to resist.11 This is especially the case since the Palestinians have never enjoyed sovereign independence which has been granted to so many other countries since the process of decolonization began in the 1960's.12 However, Israel has defied the will of the international community for over sixty years and the UN has failed to provide protection for the Palestinian people and has failed to facilitate the implementation of these rights.13The brutality of the Israeli reaction to any form of resistance and its continued expansionist and annexation policies within the context of the prolonged occupation must also be borne in mind when considering the legitimacy of the Palestinian reaction. A further factor to consider is the asymmetrybetween the two sides – Israel as the fifth strongest military in the world14with very powerful allies including the US and the UK, against an essentially unarmed, economically stripped and disempowered people.15Not only do the Palestinians have to deal with the subjugation by the occupier, but also with the violence meted out by armed settlers living on the same territory, who are able to act with total impunity.

While a right to armed struggle is not granted by either the 1907 Hague Convention or GCIV, nor is it specifically prohibited16 as long as it is in accordance with international humanitarian law. It is likely that, during the drafting of these treaties, occupation was regarded as a transitory condition rather that a decades-long permanent situation.Any right to resistance for the Palestinian people is linked to their inalienable right to self-determination.This would be the same principle on which the allied forces supported resistance in the countries occupied in WWII, such as France. In the context of the downfall of European colonialism, during the 1970's, the international community tended “to view resistance against outside domination as justifiable.”17

The 1960 Declaration on the Granting of Independence to Colonial Countries and Peoples states that:

All armed action or repressive measures of all kinds directed against dependent peoples shall cease in order to enable them to exercise peacefully and freely their right to complete independence, and the integrity of their national territory shall be respected.18

In 1970, referring to the elaboration of the principle of self-determination in the Declaration Concerning Friendly Relations, the General Assembly affirmed:

the legitimacy of the struggle of peoples under colonial and alien domination recognized as being entitled to restore to themselves that right by any means at their disposal.19

In 1973, the General Assembly passed a resolution specifically referring to the South African and Palestinian people and legitimising their liberation struggle:

by all available means, including armed struggle.20

In 1974, the General Assembly adopted a definition of Aggression which prohibits any occupation, however temporary,21 and lists many forms of aggression22 including annexation of territory by force, bombardment and blockade. However, Article 7 of the Annex specifically excludes from the definition a people's struggle for self-determination, stating:

Nothing in this Definition . . . could in any way prejudice the right to self-determination, freedom and independence, as derived from the Charter, of peoples forcibly deprived of that right . . ., particularly peoples under colonial and racist regimes or other forms of alien domination; nor the right of these peoples to struggle to that end and to seek and receive support, in accordance with the principles of the Charter .

While today the Palestinian people and their international supporters are adopting many innovative methods of non-violent struggle, it is important to emphasize that the Palestinians are indeed a group struggling for self-determination against a colonial, racist regime. The mainstream media's presentation of information, especially its focus on Palestinian violence, is often manipulated to encourage viewers to associate "terrorism" with the victims of oppressive regimes, who are legitimately resisting.23 Furthermore, particularly since the events of September 11th 2001, legitimate resistance is being assimilated by powerful governments and media to be part of the "terror" against which those governments seek to use brutal force. It is vital that the distinction be maintained to prevent powerful States subjugating weaker nations and oppressed peoples.24

Regardless of the controversial nature of its legitimacy, armed struggle inevitably causes human suffering to which the Palestinian people are no strangers. The resistance exercised on so many levels in Palestine today is almost exclusively of a non-violent nature. International supporters within civil society are implementing the 2005 Palestinian call for Boycott, Divestment and Sanctions and are achieving many victories within that framework. However, the situation on the ground for the Palestinian people is becoming worse by the day. The urgency of the need to put an end to the impunity with which Israel acts is tangible. The failure of the international community, especially the powerful States, to support non-violent resistance results in the repression of legitimate demands of the people in favour of oppressive regimes/States.

The question remains then: if the international community fails in its duties to support the  Palestinian people, even in their peaceful struggle against colonialism, occupation and apartheid, how can they achieve their legitimate rights?

[5] Declaration on Principles of International Law concerning Friendly Relations and Co-operation among States in accordance with the Charter of the United Nations, GA Res.2625(XXV), 24th October 1970

[16] Richard Falk and Burns H. Weston, “The Relevance of International Law to Palestinian Rights in the West Bank and Gaza: In Legal Defense of the Intifada,” Harvard International Law Journal 32/1(1991), p.154

[18]Art.4 Declaration on the Granting of Independence to Colonial Countries and Peoples, UNGA Resolution 1514 (XV),14 December 1960

More in this category: « A Finding of Aparthied Prospects for ending Israel’s impunity for apartheid and other crimes »
back to top