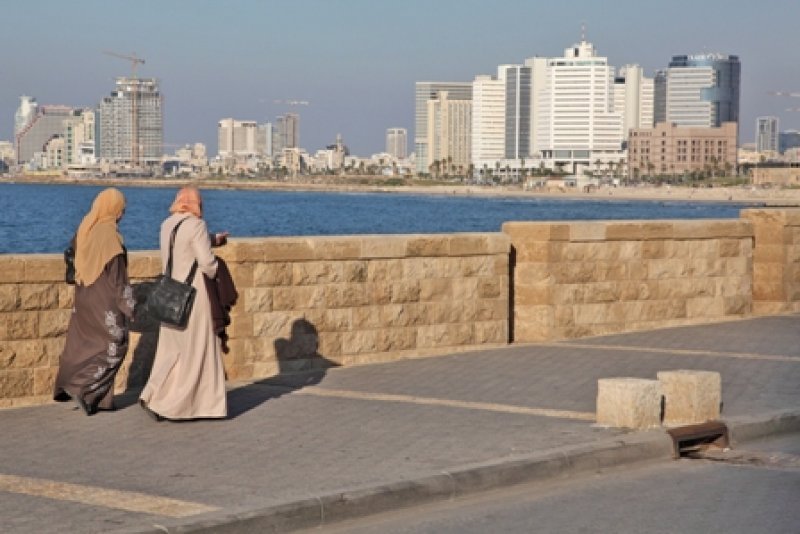 Alienated in their homeland: Palestinian women in Jaffa, 2012 (© RW/BADIL)

Discrimination is in large part due to the self-proclaimed double definition of the State as “Jewish and democratic” and the absence of a written constitution or bill of rights. According to Israeli law, Israel is “Jewish and democratic,”3 yet the development and current structure of Israel is characterized as a Jewish state that privileges its Jewish majority over its non-Jewish minority through state policies, legislative measures, court decisions and official institutions. The Jewish character of the State continues to be emphasized, to the detriment of its democratic character, thereby jeopardizing the status of citizenship within Israel and the safeguarding of equal civil and political rights.

Palestinian Arab citizens of Israel are discriminated against annually by way of State budget allocation. Each year, the Mossawa Center has analyzed Israel’s Development Budget, which contributes to important sectors of society like housing, land, infrastructure and transportation, and found that the government has never allocated more than 6% of the Development Budget to the Palestinian Arab minority. This data is determined by analyzing to which localities the Development Budget is distributed (Jewish and Arab localities are generally segregated), and by noting budget lines which are specifically designated for Jewish institutions (such as Jewish cultural organizations) and retired military personnel (a large majority of which are Jewish). A few key statistics from the 2012 Development Budget analysis4 are as follows:

The Israeli Land Administration (ILA) allocates 400,000 NIS ($107,000) towards the implementation of the Prawer Plan, a government decision taken in 2011 which intends to evacuate up to 70,000 Palestinian Bedouin citizens from their ancestral lands in the Negev.5 The State considers these citizens to be “trespassers”6 and considers their villages to be unrecognized. This budget line will be used to facilitate their forced removal and pay their compensation.

The results of unequal State budget allocation are clear to anyone who visits Israel. A casual tourist can notice that Palestinian Arab towns suffer from overcrowding, house demolitions, inadequate roads, state services (such as garbage collection), and infrastructure on a level that is inferior to that found in Jewish towns. It is no wonder that in 2008, the Mossawa Center found that over half of the Palestinian Arab population in Israel lives under the poverty line, as compared to 15% of the Jewish population.7

Foreign Minister Avigdor Lieberman, head of the Yisrael Beitenu party, which is expected to gain the largest number of seats (in partnership with Likud) in the January 2013 general elections, is known widely for his campaign against Palestinian Arab MKs and the Palestinian Arab community as a whole. In 2006, Lieberman, in a speech to the Knesset, called for the execution of three Palestinian Arab MKs who had visited Syria; he stated, “the fate of the collaborators in the Knesset should be identical to that of the Nazi collaborators.”8 In 2009, during a press conference, Lieberman announced that two Palestinian Arab MKs, Ahmad Tibi and Muhammed Barakeh, were more dangerous to Israel than the leaders of Hamas and Hezbollah. He said, “They work from the inside, they operate methodically to destroy the State of Israel as a Jewish state.”9 In 2009, in attempt to ban Palestinian Arab political parties, Lieberman stated, “We will take care of you like we take care of every terrorist.”10

Unfortunately, Lieberman is not the only MK that makes such statements. For example, Likud MK Danny Danon labeled Palestinian Arab MKs “masked terrorists” in 2012, claiming, “We cannot remain quiet while a terrorist cell develops in the Knesset.”11 Additionally, Yisrael Beitenu MK Anastasia Michaeli assaulted Palestinian Arab MK Ghaleb Majadleh this year by throwing a glass of water in his face during a Knesset meeting.12

In addition to these attacks, Palestinian Arab MKs are forced to constantly defend their parliamentary immunities in court. For example, in 2009, MK Muhammed Barakeh was indicted for attended peaceful political demonstrations and allegedly assaulting police officers. Already two of the four charges have been dropped by the Supreme Court, citing parliamentary immunity. In 2010, MK Said Nafaa was charged with contacting a foreign agent and visiting an “enemy” state during a trip to Syria, in which he accompanied 280 Druze clerics to visit their holy sites.13

These are just a few incidents of the regular harassment faced by Palestinian Arab MKs. While Palestinian Arab MKs have demanded that the perpetrators of these attacks be investigated for charges of incitement and racism, the Israeli deputy state prosecutor has never followed through with their requests. When political leaders who incite against the Palestinian Arab community remain unchallenged, it further legitimizes racism in the national psyche. This hostile environment also makes collaboration within the Knesset difficult, as the Palestinian Arab MKs feel that they are unwelcome.

A recent trend among right-wing political parties is to try to ban Palestinian Arab MKs and parties from participating in national elections. In 2003, petitions from right-wing parties to the Central Elections Committee (CEC) demanded the disqualification of MK Azmi Bishara and his Balad party, as well as MK Ahmad Tibi (Ta’al) from participation in the upcoming elections. The CEC, comprised of proportional representatives of all parties in the Knesset, disqualified these candidates and the Balad political party based on the allegation that they “support the armed struggle of an enemy state or a terrorist organization against the state of Israel.” The Supreme Court reversed the decision of the CEC and both MKs and Balad were able to participate in the elections.14

Right-wing MKs also submitted petitions to the CEC before the 2006 election and the 2009 election to disqualify Palestinian Arab MKs and political parties. Although the CEC decisions were both overturned in the Supreme Court, the bans set a dangerous precedent that is already influencing the upcoming elections.

Over the past month, members of several right-wing parties have sought to ban Palestinian Arab political parties Balad and Ra’am-Ta’al from the upcoming elections. In addition to this, MK Ofir Akunis of Likud submitted a request to disqualify MK Hanin Zoabi of Balad as a candidate for the next Knesset.15 The CEC voted against the requests regarding the two political parties, but voted in support of the request to ban MK Zoabi.16 On December 30th, the Israeli Supreme Court reversed the decision, allowing MK Zoabi to run in the elections.17

The threats and accusations launched at Palestinian Arab MKs, and the constant attempts to ban them from national elections, speaks clearly to the problem Israel faces in maintaining a “Jewish democratic state.” As long as Palestinian Arab citizens feel that they are seen as a “fifth column” by their Jewish neighbours, they cannot reach their full and equal potential as citizens.

The realization of equality, in both economic and political fields, is difficult to reconcile with the State’s core definition – Jewish – as a national identity. This national identity implies membership in a group which over 20% of citizens do not belong and are excluded from ever becoming members in. Guaranteeing equality before the law and equal protection of the law for all citizens, including the Palestinian Arab minority, is vital so that Palestinian Arab citizens can obtain their full rights and reach their potential as key players in the peace process. It is the Mossawa Center’s firm belief that the Palestinian Arab community in Israel, familiar with both Palestinian society and Jewish Israeli society, can act as mediators between the two peoples in a future regional peace settlement.

Dana DePietro is a member of the International Advocacy staff at the Mossawa Center, the Advocacy Center for Arab Citizens in Israel, in Haifa.

More in this category: « Reframing Palestinian Human Rights Work: Geography, Politics and Terminology Palestinian Identity in Israel since the First Intifada: Un-erasing the Nakba »
back to top