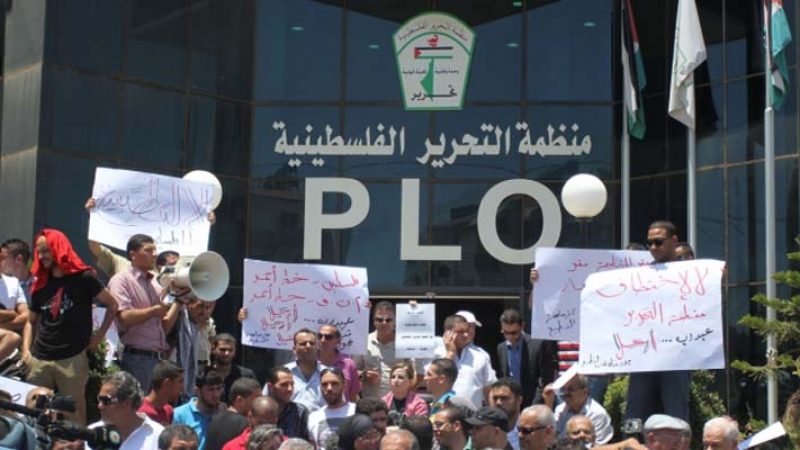 Palestinians demanding the reform and reactivation of the PLO. Ramallah, July 2014 (source: al-ayyam)


There is a general consensus among Palestinians, that their institutions need rebuilding[3]; this applies to the Palestine Liberation Organization (PLO), to the PA, to mass organizations, professional organizations and local public institutions. The PLO - as the unifying national framework for the myriad political and ideological factions and outlooks that inhabit the Palestinian political field has - been emptied of any vitality.  The elevation of the PA over the PLO happened under the mistaken belief that the newly established self-governing authority is the nub of a forthcoming sovereign Palestinian state. Priority was given to building the edifice of the PA which, by the Oslo accords, denies any role to Palestinians outside the WB and GS and excludes them from being represented by the PA and from participation in national affairs.

It is no secret that the Palestinian National Council (PNC) has not met - contrary to what is stipulated in its charter[4] - since the early 1990s, and many of its responsibilities have been allocated to the PA - whose powers do not exceed a self-governing administrative authority on parts of the WB and the GS. The WB was portioned by the Oslo Accords into different areas (A, B, and C), the largest being C, which comprises more than 60 percent of the WB, remains under total Israel control, together with East Jerusalem which was annexed in 1967 and enlarged to cover 28 villages surrounding the city. The PA was maneuvered and cajoled[5] to make the continuing colonial occupation profitable and to safeguard its security.

The issue of national representation cannot be addressed simply by reviving the PLO as it was before the 1990s. It needs to be rebuilt as an organization on a new basis with a new structure and mandate. The new institutions of the PLO (particularly the PNC) have to promote active participation and involvement of all the Palestinian people, inside and outside historic Palestine. It has to absorb the positive aspects of the existing PLO, overcome its shortcomings, and take into account the changes (local, regional and international) that have taken place in the last three decades. The following have to be at the center of attention in the rebuilding of Palestinian institutions and bodies.

First, each of the Palestinian communities (in the WB, GS, in 1948, Jordan, Syria and Lebanon, the Gulf, Europe, the Americas and elsewhere) need to elect or choose its representatives to the PNC as the national umbrella institution acting as the parliament of all Palestinians empowered to elect a national leadership (an Executive Committee) accountable to it. Should a community find itself unable, for objective reasons, to elect its representatives by free and open voting, it will be required to find other ways to democratically do so. This process applies to mass organizations (women, workers, youth…), professional organizations (teachers, lawyers, engineers, doctors, writers, journalists...) and local bodies (municipalities, local councils and popular committees in camps). A proportional representational electoral system seems advisable to ensure all political parties and movements are adequately represented at national or community levels.[6]

Second, it is important not to confine the process to the election or selection to the PNC members from each community. It is as important to apply the process to mass organizations and professional organizations, at the level of each community, to be complemented by the formation of effective and autonomous organizations at the national level (Palestinians from different communities). This process is essential for opening the way to the participation of the rank and file in each of the Palestinian communities in the national issues through political parties and through trade unions, professional syndicates and social movements.

Third, Palestinians need to be aware of the dangers of diminishing democracy to its procedural aspects (i.e. to holding regular free and fair general elections).  This dims the values that genuine democracy entails the most important - of which are freedom, equality and social justice. Besides, holding general elections needs to be put in its socio-political context. In the Palestinian context of settler colonialism and military occupation general elections require a consensus among Palestinians as to aims of the undertaking of general elections, the conditions under which they are held, and on how to use the results. This was not adhered to in the legislative elections held in 2006 and the disastrous political consequences that followed. General elections in sovereign states are held to decide which political party governs and which forms the opposition. This does not necessarily apply in societies under military colonial occupation where a coalition of all forces is needed to face the colonial occupier.

What is needed is a new form of politics that engages the action of grassroots organizations, of political parties, civil society organizations, social movements and other social formations present in the various Palestinian communities inside and outside historic Palestine. An elitist view of politics is disastrous for a national liberation movement as the last three or so decades have shown. What unifies Palestinians in their diverse communities is the inescapable reality of their dispossession, repression, discrimination, besiegement, and the denial of their historic and other rights.

Fourth, what precededsuggests that each Palestinian community has to draw democratically its strategy informed by its specific situation, while its role within the national strategy will be informed by discussions of its representatives in national institutions or through national referendums should there be a need for such measures. Diverse specific strategies are accepted because of the diverse conditions that Palestinian communities labor under. Thus the 1948 Palestinians (with Israeli nationality) will need a different strategy than that appropriate for the GS, and the WB requires a different strategy from that of Palestinians in camps in Jordan or in Lebanon or in Syria or those in Europe and the Americas. Strategies will remain open to modifications as decided by each community and subject to changes according to the circumstances. National struggle, international solidarity, and coordinated events will of course call for unified activities inside and outside historic Palestine.

Democratically created national institutions will be required to represent the rights and interests of all Palestinians regionally and internationally and act in their name in international specialized agencies (the International Criminal Court, UNESCO, etc.). This applies to national mass and professional organizations as well as social movements (like BDS) as they seek, among other tasks and roles, to tighten international isolation on Israel and impose sanctions on it. In this effort the cultural field (through photos, movies, videos, novels short stories, paintings, songs, articles, lectures, poetry, journalism and other forms) pursues to keep alive the Palestinian historic narrative, Palestinian patriotism and to expose the various ongoing forms of repression, discrimination and ethnic cleansing Palestine.

Fifth, there is a need tore-examine the Palestinian national charter[7] to capture the emerging consensus among the various Palestinian communities (as expressed in various documents and common understandings, e.g. the National Charter of 1968, the 1988 Declaration of Independence,[8]the call for the BDS campaign in 2005,[9] the 2007 Haifa Declaration,[10] the Palestinian prisoners document of May 2006[11]).  Drawbacks and shortcoming of each existing instrument are to be evaluated as well as the circumstances in which drafting of these took place. The aim is to formulate a comprehensive guiding document that will be adopted as a binding instrument by the newly democratically formed PNC. The new charter needs to highlight the Palestinian historic narrative. It also needs to specify clearly the functions of the PA and to reaffirm its accountability to the PLO, being one of its branches (if it is to be retained).

Re-building of Palestinian institutions with a clear vision of their tasks and responsibilities asks for recognition  of the precious heritage of diversity (political, ideological, organizational and ideological) that featured the Palestinian national movement (including the PLO), as well as  its secular tradition that protected Palestinians from sectarianism and pernicious forms of “politicization” of religion or “sanctification” of politics. Re-building of the PLO on democratic and representative bases has to steer clear of its known pitfalls and defects - particularly the “quota” system, patronage, corruption, bureaucracy, excessive militarization, dependency on external aid, and the absence of leadership accountability.

The existing fragmentation of Palestinians into isolated, disconnected and highly vulnerable communities and their subjection to the ongoing apartheid system enforced by Israel will continue unless we, Palestinians, rebuild urgently our representative institutions to exemplify values of freedom, equality and justice - to continue the fight for our rights, all our rights. Without democratic representative institutions where political and other differences and discords are settled and historic compromises are made between the major Palestinian political currents (as happened among Palestinians in the 1948 area), leaders of Fatah and Hamas will continue signing agreements in Arab capitals without the intention or ability to implement them. Данная gsm сигнализация поможет Вам сохранить Ваше имущество.

*          Jamil Hilal is a Palestinian writer and sociologist who has written numerous books and articles in Arabic and English (some translated into other languages) on the Palestinian question and other related Issues.

[2]    See for example the strategy behind the Oslo Agreements, which resulted in Israel sub-contracting the PA in order for policing Palestinian communities – while maintaining the status quo. Weinberger, P. E. (2006). Co-opting the PLO: A Critical Reconstruction of the Oslo Accords, 1993-1995. Lanham: Lexington Books. p. 22. Declaration of Principles on Interim Self-Government Arrangements ("Oslo Agreement"), September 13,  1993. Available at: http://www.refworld.org/docid/3de5e96e4.html [accessed February 9, 2016]. and Interim Agreement on the West Bank and on the Gaza Strip ("Oslo II Agreement"), September 28, 1995. Available at: http://www.refworld.org/docid/3de5ebbc0.html [Accessed February 9, 2016].

[5]    One of Israel’s strategic goals with the Oslo Agreements and the creation of the PA exactly consisted out of the sub-contracting the task of policing the Palestinian population to the PA. Weinberger, P. E. (2006). Co-opting the PLO: A Critical Reconstruction of the Oslo Accords, 1993-1995. Lanham: Lexington Books. p. 22.

[11]   National Conciliation Document of the Prisoners. May 11, 2006. Available at: http://www.palestinianbasiclaw.org/downloads/The-National-Conciliation-Document-of-the-Prisoners-11-May-2006.pdf [Accessed February 11, 2016].

More in this category: « Using other forms of resistance Book Review »
back to top