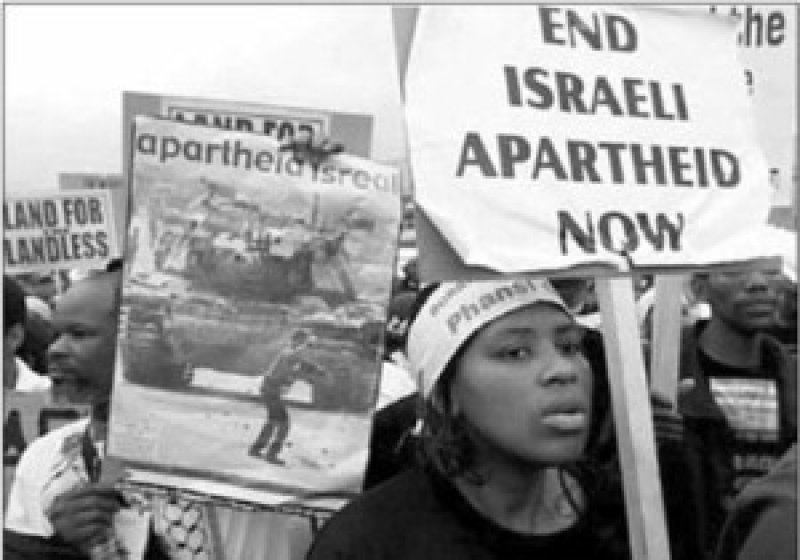 Yet we know that Apartheid Israel was created through a series of massacres and assaults on Palestinian villages such as Tantura and Deir Yassin and the destruction of 470 Palestinian towns and villages. Over 750 000 Palestinians were violently expelled from their homes and villages in order to create the demographic conditions for the establishment of an exclusively Jewish state by the Zionist movement. Those who remained were largely denuded of land, without compensation. Resulting today in over 5 million Palestinian refugees- the biggest and oldest refugee community in modern history.

The British and Dutch colonialists conquered the land through force of arms and terror and the provocation of a series of bloody wars of conquest. The Apartheid regime codified this conquest through a number of laws which further dispossessed, segregated and discriminated against the majority of South Africans. These laws included the ‘pass system’ to control the movement of people and force them to live in the ‘homelands’ or ‘bantustans’. These ‘bantustans’ or reservations, 13% of the land, were considered the land of the indigenous people. Laws ensuring the division of people along ethnic lines and unequal resource allocation by the state in every area of life was harshly implemented.

In Apartheid Israel and the ‘occupied territories’ we see a combination of Apartheid-like laws and a brutal military dictatorship. Blockades, closures, the Apartheid Wall, settlements, settler only roads, identification documents, color coded number plates and permits are overt signs of Apartheid so is the ‘third class citizenship’ of Palestinians living within the 48 borders. We note laws such as the ‘Law for Acquisition of land’, the ‘Law of Entry’, ‘Military Service Law’ and legally sanctioned discriminatory rabbinical rulings. We note how the Israeli state rests on overt repression, a system of structural violence and institutionalized discrimination. Apartheid Israel has developed an elaborate system of discrimination, embedded in its legal system-even surpassing Apartheid South Africa’s laws.

The leaders of our resistance movements were promised freedom if they renounced violence and accepted the ‘bantustan’ system. They rejected this mockery of self-determination and demanded nothing less than a unitary state with basic democratic rights for all-black and white. The peoples of the world declared apartheid in South Africa a crime against humanity and embarked on a comprehensive boycott of the Apartheid state. Of course, pariah states like Israel, Pinochet’s Chile, and the governments of most Western states happily cemented trade, cultural, military and nuclear links with Apartheid South Africa.

The US hegemon and the EU are today proposing a Bantustan, a ‘state’ with a dependent economy, no contiguous territory and no substantial power, where Palestinians can be exploited, controlled, restricted and confined in reservations. A dependent Bantustan alongside an apartheid state is a mockery of self-determination-as it existed in apartheid South Africa and now in apartheid Israel. Above all, they want the world to forget about the millions of Palestinian refugees. In Israel, no less than in South Africa, minimum justice requires dismantling the apartheid state and replacing it with a democratic Palestine, where Jews and Arabs, Christians and Muslims, live together with equal rights. Just as importantly, there can be no solution without the right of return of the refugees and their children.

We stand with you as millions around the world commemorate the Nakba. We salute the courage, steadfastness and fortitude of Palestinian refugees in far flung parts of the world. We remember the massacres in Sabra and Shatila, in Jordan, and in any other places. The will to survive, to resist, despite the slow genocide is a slap in the face for the tyrants and carriers of misery who want to see you disappear. Palestinians refuse to become the modern day American Indians, decimated by imperialism and those who survived forced into reservations, humiliated every day, and in the words of Emmanuel Ortiz, a South American poet “now reduced to innocuous magnetic poetry on the refrigerator of our consciousness.” For the oppressed and justice loving people of the world your struggles and resistance is an endless source of succor, hope and inspiration. In the face of the hypocrisy of world governments and international agencies, we call on the people of the world to show concrete solidarity, to intensify the isolation of Israel and to raise the banner of the right to return.

* Salim Vally is a member of the Palestine Solidarity Committee in South Africa and a Senior Researcher at School of Education University of the Witwatersrand, South Africa

More in this category: « Calling a Spade a Spade:The 1948 Ethnic Cleansing of Palestine The Role of the Church in (de)Constructing Apartheid and Colonization in Palestine »
back to top