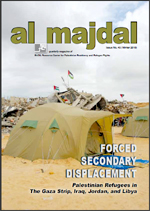 This issue of Al Majdal is the second of two issues focusing on the secondary forced displacement of Palestinian refugees. Both issues also start with poetry and prose from around the world which cover issues relating to colonialism, forced displacement, and oppression.

Hazem Jamjoum interviews lawyer Anis Qassem to understand the complex legal mechanisms through which the Jordanian citizenship of Palestinian refugees is revoked, Doug Smith chronicles the journey of Palestinian refugees resettled from the border camps between Syria and Iraq to Chile and Professor Bassem Sirhan tells the story of the expulsion of the small Palestinian community from Libya in 1994-1996. Also included in this issued is a photostory from Gaza by Anne Paq which gives an insight into the conditions of Palestinian refugees displaced again after the destruction of their homes by Israel.

Impunity continues to prevail in the Occupied Palestinian Territory (OPT), a state of affairs clearly evident in the international response to Israel’s military offensive in the occupied Gaza Strip between 27 December 2008 – 18 January 2009 in which more than  1,400 Palestinians and 14 Israelis were killed.[1]  83% of the Palestinian victims were Geneva-Convention protected civilians, most of them Palestinian refugees who had been forcibly displaced from their homes and properties to the Gaza Strip as a result of Israel's ethnic cleansing operation (the Nakba) of 1948.

Palestinian Refugees in Jordan and the Revocation of Citizenship 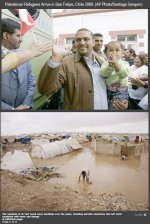 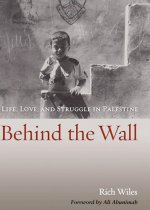 The majority of Palestinian voices are still being ignored

A quick search for ‘Palestine’ on Amazon.com (the world’s biggest book retailer) reveals over 15,000 available entries. There is clearly no shortage of literature on the subject, much as there is no shortage of discussion or opinion around the world. Many of the books written pre-Nakba were structured within two main catagories. Some were traditional ‘adventurer’ type travel journals almost exclusively penned by authors from the ‘privileged minority’ of the colonialist states, whilst others looked through religious and political perspectives including the reams of early Zionist literature. Post-1948, Palestine-related literature was dominated by accounts lauding the establishment of the Zionist dream. Again, these works were almost exclusively written by ‘Westerners’, which is unsurprising when acknowledging the fact that the creation of ‘Israel’, and the ethnic cleansing that formed an intrinsic part of that process, was a European-style colonialist project.

Glasgow shops join boycott of all Israeli produce
30 August 2010 – Following a campaign by Friends of Al Aqsa and the Scottish Palestine Solidarity Campaign, Asian shops in a key area of Glasgow declare themselves free of Israeli produce. A number of shopkeepers were unaware that they were even stocking Israeli goods and thanked campaigners for helping them to correctly identify Israeli goods.

Photostory: Thousands of Palestinians still displaced in the Gaza Strip 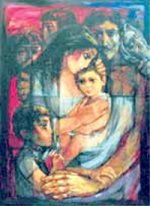 Written by various poets and writers from around the world

Special Poetry Feature incldues some of the pieces contributed by various poets and writers from around the world related to the theme of the Palestinian Nakba: