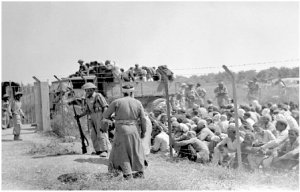 Prospects for ending Israel’s impunity for apartheid and other crimes

It is very possible that the Arabs of the neighbouring countries will come to their aid against         us. But our strength will exceed theirs. Not only because we will be better organized and         equipped, but because behind us there stands a still larger force, superior in quality and        quantity … the whole younger generation [from Europe and America].

Apartheid—both petty and grand—is obviously evil. Nothing can justify the arrogant        assumption that a clique of foreigners has the right to decide on the lives of a majority.

“Palestine Does not Have to Bargain to Obtain its Human Rights”

Role of Civil Society in Ensuring Adherence to International Law

The United Nations International Meeting on the Question of Palestine took place under the auspices of the Committee on the Inalienable Right of the Palestinian People (‘the committee’) at the UN Office (Palais des Nations) at Geneva on 8 and 9 March 2005. For this conference, the Committee chose the theme: Implementing the ICJ Advisory Opinion on the Legal Consequences of the Construction of a Wall in the Occupied Palestinian Territory – The role of Governments, intergovernmental organizations and civil society.

Violations of human rights and humanitarian law, particularly when systematically carried out with no regard to their consequences, demand that other states and international organisations not simply take notice, but take action. The legal basis for proportionate and “effective” (1) responses to such violations are gaining momentum through an emerging international legal principle of the responsibility to protect, which forms part and parcel of state responsibility. The responsibility to protect is firstly a duty to ensure that mechanisms are in place to prevent violations from taking place (2) and secondly a duty of states, acting in their individual or – ideally – collective capacities, to intervene in order to protect civilians from potential or further violations.(3)