This annexation is to be achieved through Israel’s unlawful designation of this area as ‘state lands’ by way of an entirely cynical application of Ottoman era land law. As has been extensively outlined by BADIL, from its very formation Israel has been selectively enforcing, wrongly interpreting and illegally implementing laws from Ottoman, British Mandate and Jordanian eras in an attempt to confer legitimacy upon its grave breaches.  Israel has previously used such means to expropriate vast tracts of the West Bank, including the capture of almost 1,000 acres from the Palestinian village of Wadi Fukin, in August 2014. Under the present plan, this land would be converted into Israeli agricultural settlements/colonies, joining the large number of such colonies already located in the Jordan Valley.

Such actions are unequivocally prohibited under international law, which prohibits both the confiscation of occupied land by an occupying power, as well as the transfer by an occupying power of its own citizens into the occupied territory. Indeed, both of these acts are categorized as grave breaches of the Fourth Geneva Convention, as well as being prosecutable as war crimes under the Rome Statute of the International Criminal Court. 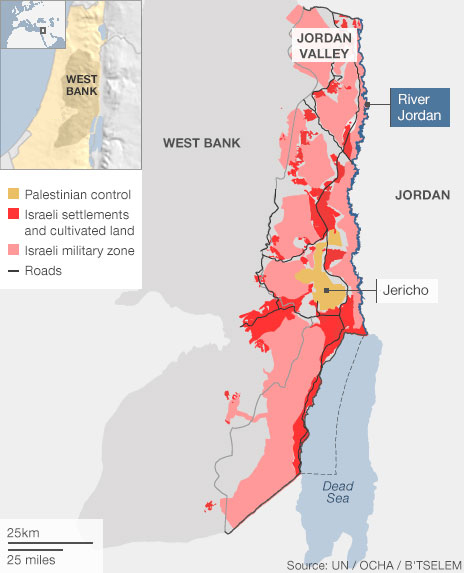 Further, this wholesale expropriation of Palestinian land is typically preceded by the mass forced displacement and transfer of Palestinians. Such unlawful displacement has proved a constant since the Nakba of 1948, pursued by Israel through a catalogue of discriminatory measures and the establishment of a deeply coercive environment for Palestinians inside the oPt, leaving many with no genuine choice but to leave their places of lawful residence.

In addition, in Israel’s turning over of unlawfully appropriated land for commercial purposes, the issue of corporate complicity in human rights abuses inside the occupied Palestinian territory (oPt) is brought to the fore. This is an area deserving of far greater awareness, and to this end both BADIL and Human Rights Watch have recently produced publications outlining the extensive role played by private enterprises in the support of Israeli colonies and their associated infrastructure.

Yet, despite the fact that this present plan and other prominent examples of land confiscation by Israel have been widely criticized by - inter alia - Ban ki-Moon, the United States and the European Union, such criticism has been roundly ignored by Israel. This is made possible both by the weakness of the language used in this criticism, and Israel’s knowledge that this criticism will not be accompanied by any meaningful, punitive measures.

To this end, the collective failure of the international community – consisting of influential states, regional bodies and UN organs and agencies – to hold Israel accountable for its continuing forcible transfer of Palestinians and annexation of Palestinian land has only emboldened the occupying power in its conducting of such abuses.

Israel is – in both the literal and figurative sense - cementing its presence in Area C; acting as de facto sovereign power and denying Palestinians their right to self-determination. Such actions are entirely compatible with legal definitions of colonialism, and what is desperately required, therefore, is an alternative approach which addresses and fully rectifies these abuses. Such an approach must be firmly rooted in international law, not just in its underpinning rationale, but in its application. for lawyer: US Code , united states law, legal, and rights library

1.     Calls upon third party states, regional bodies, and international non-governmental organizations to apply appropriate legal terminology to the present day reality in the oPt; particularly, identifying that Israel’s ongoing mass forced displacement of Palestinians inside the oPt constitutes forcible transfer, and that the annexation of Palestinian land constitutes unlawful appropriation of property;

2.     Calls upon High Contracting Parties, as a matter of great urgency, to honor their obligation under Common Article 1 of the Fourth Geneva Convention to take all available measures - including the application of sanctions - to halt Israel’s perpetration of grave breaches of the Convention;

Draws to the attention of the International Criminal Court, Israel’s continuing perpetration of acts and policies inside the oPt which are prohibited under the Rome Statute.