As Palestinian refugees and internally displaced persons (approximately 66% of Palestinian population worldwide) enter the 69th year of forced displacement from, and within, their ancestral homeland, Israel continues to create intolerable living conditions which further swell the number of displaced Palestinians. This ongoing Nakba (‘catastrophe’) is perpetuated through Israel’s denial of the Palestinian refugees’ Right of Return, the right to self-determination, and various other Israeli policies, which give rise to forced displacement of Palestinians, including forcible transfer and deportation, as grave breaches of international law. These policies are framed within the wider gamut of perpetual human rights violations being committed by Israel on both sides of the green line, across the entirety of the occupied Palestinian territory and Israel.

Inside occupied East Jerusalem and so-called ‘Area C’ (accounting for more than 60% of occupied West Bank land), Israel pursues with complete impunity a policy of forcible transfer of Palestinians by way of - inter alia - unlawful land appropriation, home demolitions, denial of residency, restrictions on land access, and extensive settlement expansion. Further, Palestinian residents of these areas are subject to systematic discrimination, harassment and violence perpetrated by Israeli settlers and security services alike, producing a highly coercive environment in which Palestinians are often left with little option but to leave their homes and communities.

Meanwhile, the Gaza Strip and its residents - some 80% of which are registered refugees - are plunged further into humanitarian crisis, choked by Israel’s ongoing punitive closure of this enclave which prevents desperately needed recovery following multiple rounds of Israeli military assault. As a result, many tens of thousands of Palestinians remain internally-displaced within the Gaza Strip, living in inhuman conditions and with no end to their displacement in sight.

This widespread Palestinian suffering is not limited to the borders of Mandate Palestine, however, but also extends to the almost 6.2 million individuals (approximately 49% of Palestinians) who make up the international Palestinian Shatat (Diaspora). Of particular concern is the fate of those in Syria, with the United Nations Relief and Works Agency in the Near East (UNRWA) finding that half a million Palestinian refugees have been directly affected by the unchecked violence of the ongoing armed conflict. More than 60% of these refugees have now experienced multiple phases of displacement inside and outside Syria. Moreover, those refugees who have been forced to seek safety in other states are subjected to either refoulment or discrimination by countries of third refuge.

The plight of Palestinian refugees is compounded by structural failings within the very systems which are intended to afford these refugees protection. Palestinian refugees are victims of a grievous protection gap; regularly denied protection under the 1951 Refugee Convention on account of consistent misinterpretation of Article 1D by the domestic courts of state signatories. This provision entitles Palestinian refugees to full protection under the Convention in the event that they are unable to avail themselves of protection or assistance from a dedicated UN agency other than the United Nations High Commissioner for Refugees (UNHCR), yet no UN agency is currently providing legal protection, including the seeking of a durable solution, to this displaced population.

The United Nations Conciliation Commission for Palestine (UNCCP), established with the purpose of seeking a just and durable solution to the Palestinian refugee question, has now lain effectively dormant for more than half a century, thus depriving Palestinian refugees of a UN agency mandated with the provision of legal protection. UNRWA, which is mandated with affording humanitarian protection/assistance to Palestinian refugees living in its five operational areas only, is unable to fill this lacuna on account of chronic funding issues and a mandate which, in its present form, does not incorporate legal protection or the pursuit of an end to the ongoing exile of this displaced population. However, too often domestic courts have employed an overly simplistic interpretation which assumes protection to be present merely by virtue of a Palestinian refugee residing in an area subject to UNRWA’s jurisdiction.

This untenable situation must be addressed as a matter of urgency, but also highlights the necessity of implementing a durable solution for Palestinian refugees in accordance with international law, specifically United Nations General Assembly resolution 194 of 1948, and United Nations Security Council resolution 237 of 1967. This, in turn, can likely only be achieved through the presence of a fully-functioning and fully-supported agency dedicated to pursuing such a solution. Thus, there exists a clear and pressing need to either revive UNCCP, to completely integrate Palestinian refugees into the scope of UNHCR mandate, or to officially extend UNRWA’s existing mandate - both in its core content and geographic scope, as well as its funding base, so as to provide comprehensive protection to Palestinian refugees. Failure to do so is to maintain a status quo where international protection is absent, with Palestinians condemned to a fate of acute hardship and further displacement.

Accordingly, we, the undersigned members of the Palestinian Human Rights Organizations Council, make the following recommendations:

That the Palestinian Authority and the Palestinian Liberation Organization make concerted efforts to press concerned states and international agencies to meet their responsibilities, particularly with a view to fulfilling their obligations relating to non-refoulement, and non-discrimination. 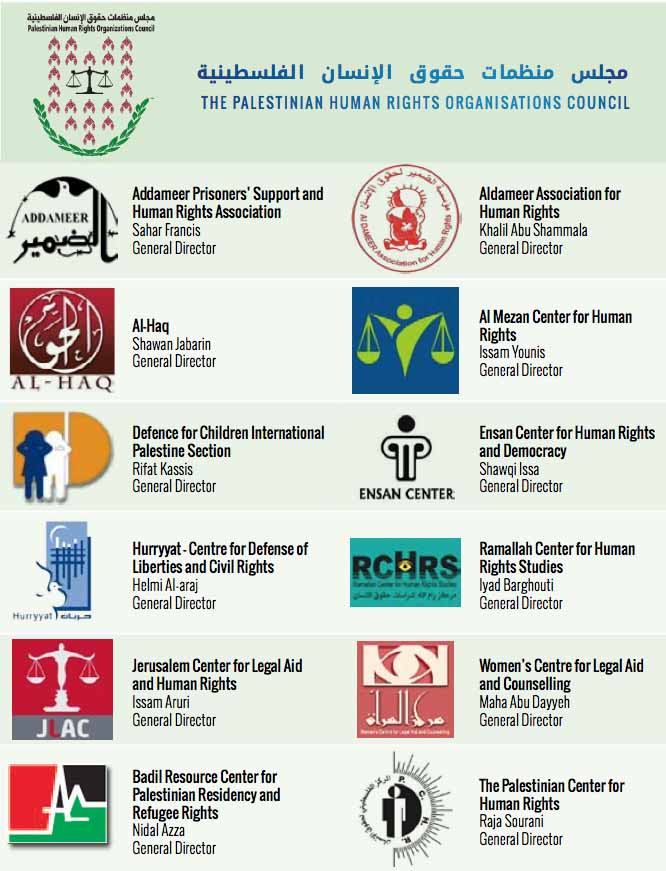