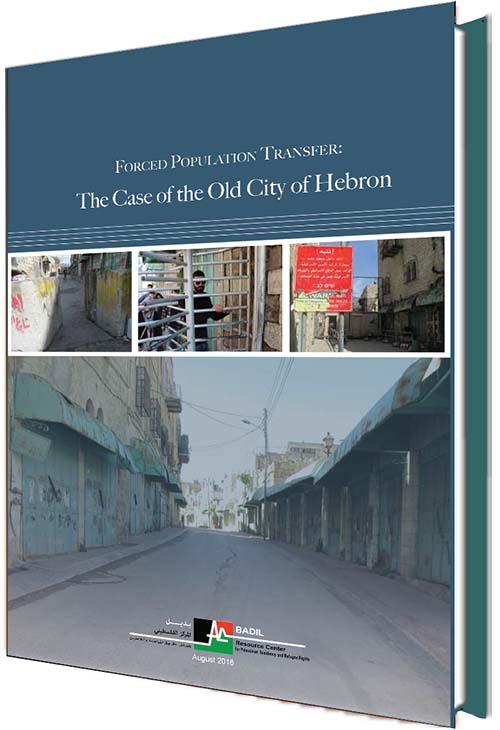 BADIL announces the release of the Forced Population Transfer: The Case of the Old City of Hebron Working Paper. This case study supplements BADIL’s 10-paper Series on Forced Population Transfer: The Case of Palestine and examines how Israeli policies of forcible transfer work in Hebron’s Old City. This specific paper focuses on the most affected areas by these policies in the Old City, where the implantation of Israeli colonies and colonizers, among other practices, has resulted in the forcible transfer of significant numbers of Palestinians from their homes.

Since the establishment of Israeli colonies in the Old City in the 1970s, Israel has not only added to its range of oppressive policies, but also has, in a number of cases, intensified these policies so severely that the existence of Palestinians in the Old City of Hebron becomes impossible. This Case Study looks into the ways in which Israel violates many Palestinian rights, including freedom of movement and access to property, while strengthening military protection of the colonizers, which in turn emboldens them to harass, abuse and attack the Palestinian population. Numerous Israeli military orders, moreover, under the guise of ‘security,’ have resulted in the closure of hundreds of businesses and the forcible transfer of a considerable number of Palestinians who were residents of the Old City.

The particular circumstances of Hebron’s Old City make this paper a very strong case study that shows the implementation and interaction of different Israeli policies of forcible transfer, not only in the area covered by the research, but throughout Mandate Palestine.


About the series:
This Series of Working Papers on forced population transfer is intended to encourage debate, and to stimulate discussion and critical comment. Together, and drawing upon desk and field-based research, these papers will identify and explore the key components of Israel’s policies and mechanisms of forcible transfer of the Palestinian population. Specifically, BADIL has identified these components are as follows: