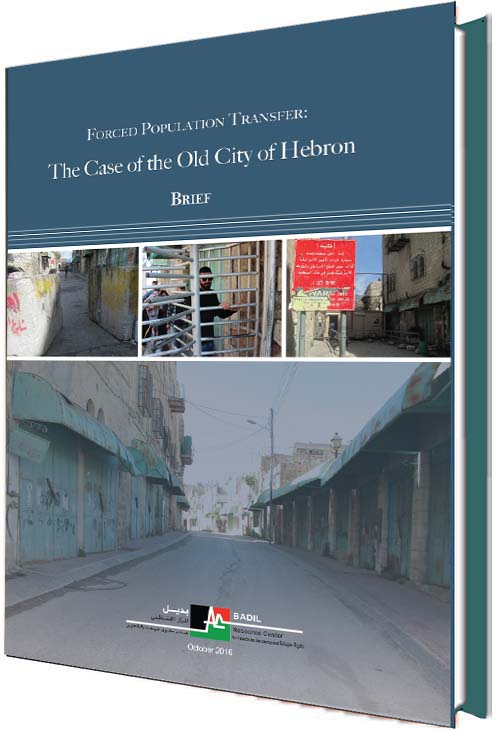 BADIL announces the release of the Brief version of Forced Population Transfer: The Case of the Old City of Hebron. This 44-page report is part of a more extensive Working Paper released on August 2016, exploring the different policies that Israel employs to coerce the forcible transfer of Palestinians in Hebron’s Old City. This specific paper focuses on the most affected areas by these policies in the Old City, where the implantation of Israeli colonies and colonizers, among other practices, has resulted in the forcible transfer of significant numbers of Palestinians from their homes.
Since the establishment of Israeli colonies in the Old City in the 1970s, Israel has not only added to its range of oppressive policies, but also has, in a number of cases, intensified these policies so severely that the existence of Palestinians in the Old City of Hebron becomes impossible. While the Working Paper provides a more comprehensive overview of how these policies operate, the Brief aims to provide a more digestible and concise report of the most relevant policies focusing on the most prominent examples.

The particular circumstances of Hebron’s Old City make this Brief and the Working Paper a very strong case study that shows the implementation and interaction of different Israeli policies of forcible transfer, not only in the area covered by the research, but throughout Mandate Palestine. This is why BADIL decided to complement this report with a short film showing the human impact of the Israeli policies of forcible transfer.

Forcible Transfer in the Old City of Hebron from BADIL Resource Center on Vimeo.


The film, titled ‘Forcible Transfer in the Old City of Hebron’ provides an overview of some of the policies implemented by Israel and includes several interviews with residents of Hebron’s Old City and other affected Palestinians. The visuals and testimonies of the film coupled with the rigorous desk and field research gathered in the report aim to provide a comprehensive overview of the situation in the Old City of Hebron.


About the series:
This Series of Working Papers on forced population transfer is intended to encourage debate, and to stimulate discussion and critical comment. Together, and drawing upon desk and field-based research, these papers will identify and explore the key components of Israel’s policies and mechanisms of forcible transfer of the Palestinian population. Specifically, BADIL has identified these components are as follows:
- Denial of residency
- Discriminatory zoning and planning
- Installment of a permit regime
- Suppression of Palestinian steadfastness and resistance
- Land confiscation and denial of use
-  Institutionalized discrimination and segregation
- Denial of access to natural resources and services
- Denial of reparations
- Non-state actions (with the implicit consent of the Israeli state)