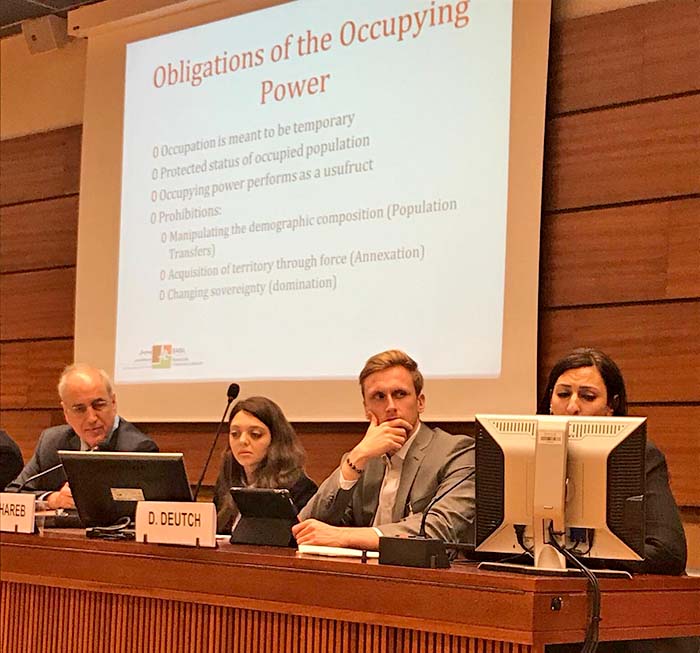 BADIL’s engagement in the UN is multifaceted and diverse. In addition to BADIL’s formal interventions with the UN, reports, written and oral statements, and presentations to special procedures, BADIL contributes significantly to the less formal mechanisms known as side events in addition to participation in external conferences implemented by national and international non-government organizations. Side events are activities held within the Palais de Nations, usually organized and implemented by the NGO community. In the first weeks of the 37th regular session of the UNHRC, BADIL has engaged in 1 conference and 3 side events.

6 March 2018 BADIL’s first joint side event was with the American Association of Jurists and tackled the issue of “Human Rights Defenders in Occupied Territories: Palestine and Western Sahara”. The event was attended by the Special Rapporteur on the situation of human rights defenders, Mr. Michel Forst and moderated by a former Belgian senator, Mr. Pierre Galand. The panel featured the testimonies of human rights defenders in both Palestine and Western Sahara in an ever shrinking civil society space. For a glimpse of BADIL’s intervention in this side event see here.

7 March 2018, in partnership with Stopcorporateimpunity.com and other organizations, BADIL was a keynote speaker in the conference “The Impact of Multinational Corporations in the North and South: the advent of ‘consumerism’ and the pillaging of education and natural resources” held at Geneva University.  The conference addressed the issue of stricter control, supervision and accountability for multinational corporations to respect human rights and avoid complicity due to questionable operations.

14 March, the side event “Demographic Change and the Right to Self-determination” focused on three cases: Palestine, Kashmir and Western Sahar. BADIL provided its legal analysis focusing on changes to the demographic composition in Palestine due to Israeli implemented population transfers that are prohibited under IHL. The pillars of the Israel regime are comprised of the forcible transfer of the indigenous Palestinian population out and the colonization of Jewish-Israelis in their place.

On 15 March, BADIL participated in the expert session of the side event “On Self-determination Recommendations by Independent Expert on the Promotion of a Democratic and Equitable International Order”, in commemoration the 70th Anniversary of the UDHR, the 25th Anniversary of the Vienna Declaration of Human Rights, and the Centennial of the late Nelson Mandela. BADIL’s intervention highlighted the irony concerning the occurrence of the 70th commemorations of both the UDHR and the Palestinian Nakba.