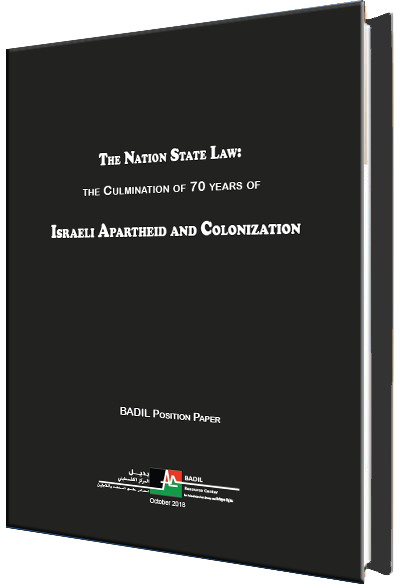 BADIL has published its position paper on the Nation State Law, which was passed by the Israeli Knesset on 19 July 2018. Passed with widespread criticism, domestically and internationally, this law now constitutionally entrenches the homogenous ethnic sovereignty of the Jewish people in Israel by declaring only the Jewish people have the right to self-determination in Israel, among other matters.

Certainly this law is controversial and cause for concern. Yet this chorus of condemnation almost invariably overlooks two of the more salient issues, which this paper explores in greater detail.

First, this law is not just the start of apartheid in Israel, that is a reality that has long-existed for Palestinians. Rather, it is a law that embeds apartheid in the legal foundation of the State of Israel. As a constitutional law, it authorizes and requires all State institutions and decision-makers to operate within the framework of a now intrinsically discriminatory state structure.

Second, and arguably more significantly, it lays the foundation for the formal annexation of the occupied Palestinian territory (oPt). It does this by firmly addressing two of the necessary precursors to annexation. Namely, a constitutional basis for an Israeli claim to the land of the oPt, and a legal basis to address the demographic threat posed by the addition of swathes of the Palestinian population to Israel’s population.

This paper demonstrates the way in which this Nation State Law is just the most recent step in a long-standing process of deepening the colonial Zionist project in Mandatory Palestine. And, critically, it is a colonial project which the international community has emboldened through its lack of tangible and meaningful action to hold Israel accountable for its widespread and systematic violations of international law.