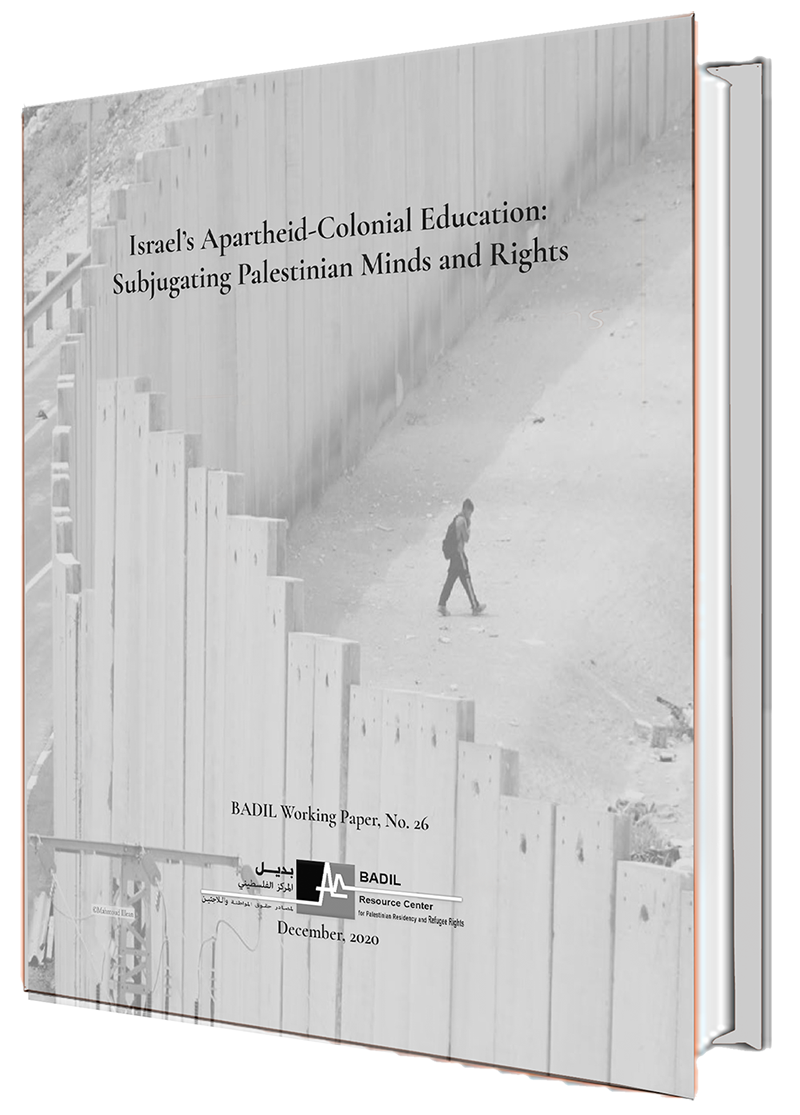 Bethlehem, 23 December 2020. BADIL releases its latest working paper no.26, Israel’s Apartheid-Colonial Education: Subjugating Palestinian Minds and Rights. The paper draws on recently reignited allegations that the Palestinian Authority’s education curriculum contains incitement to radicalization, intolerance, hatred and violence. It places these allegations, fostered by Israel-controlled lobbies, within the context of the Zionist-Israeli domination of Palestinian education as a means to entrench its apartheid-colonial regime in the whole of Mandatory Palestine.

The paper provides a holistic understanding of the colonial structure at play in Palestinian education. It identifies three apartheid tools - institutional discrimination, alienation and forced assimilation - that guide a myriad of policies and practices aimed at furthering Israel’s domination and subjugation of the Palestinian people. It further shows that such policies and practices constitute the means to advance and normalize its colonial domination over the Palestinian people and their lands; more precisely, thwarting their right to self-determination, de-developing the education system, normalizing the denial of the Palestinian national cohesion and territorial integrity, in contravention with the customary 1960 Declaration on the Granting of Independence to Colonial Countries and Peoples.

The paper proceeds to demonstrate that Israel’s strategy to impose a decontextualized approach to the right to education has inappropriately influenced the international community’s perspective on Palestinian education. It calls for a contextualized reading and application of relevant human rights instruments in the light of Israel’s apartheid-colonial regime imposed on the Palestinian people,. Building on relevant international legal instruments endorsed by UNESCO, it analyzes how Israel manipulates human rights provisions to reinforce and justify its colonial interference. It supports that promoting the right to education, and of the aims of education, as per Article 29 of the Convention on the Rights of the Child specifically, is paramount to counter the Israeli strategy to normalize colonization.

While calling upon international responsibility in indirectly nurturing Israel’s colonial project, it concludes that the Palestinian people is entitled, as a people subjected to colonial domination, to confront, challenge and deconstruct both colonial practices and narrative imposed in the domain of education, in particular through the free administration of their education system and their educational contents. Decolonizing education implies making education a tool of decolonization in and of itself, reconnecting the Palestinian people to their lands and rights, and providing tools of critical analysis that enable them to contextualize their knowledge of the coercive environment enforced on them, and encouraging their involvement in the struggle for a human rights-based and just solution.

The Arabic version of the working paper is forthcoming.