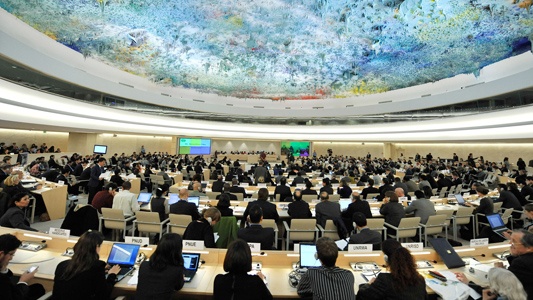 Within the 46th regular session of the United Nations Human Rights Council (UNHRC) from 22 February 2021 to 23 March 2021, BADIL submitted two statements calling the international community to stop the Zionist-Israeli colonization enterprise and to ensure accountability for Israel’s international crimes and human rights violations committed against the Palestinian people.

BADIL submitted one written statement under Agenda item 7, Human rights situation in Palestine and other occupied Arab territories, titled “Looming Annexation and Settlement Construction: Tools Employed by Israel to Further Entrench its Domination, Subjugation, and Exploitation of the Palestinian People and their Lands.” The statement primarily indicated that Israel’s employment of annexation, as most recently embodied in the currently suspended de jure annexation of large swathes of the West Bank, is not an end goal in and of itself. Rather, it is a tool that serves the same goal, that is to enforce Israel’s colonization enterprise in the whole of Mandatory Palestine. As such, the statement pointed out that the Zionist-Israeli policies of subjugation, domination, and exploitation thwart the Palestinian people's ability to exercise their right to self-determination and disrupt their national unity and territorial integrity. To explicate this, the statement contextualized Israel’s entrenched multi-tiered territorial de jure and de facto annexation as a process that has been ongoing since Israel’s creation in 1948. The statement further emphasized that the current situation of de facto annexation in the West Bank is creating a fait accompli of territorial sovereignty as encapsulated in common Israeli practices in the West Bank, namely the continuous construction and attempted legalization of settlements/colonies. Such illegal practices in the form of de facto annexation foster an enabling environment for the transfer of settlers/colonizers and the simultaneous forced displacement as well as forcible transfer of Palestinians from their lands, which once again, serve Israel’s goal to deny the Palestinian people’s right to self-determination.

BADIL submitted another statement under Agenda item 2, reports of the UN High Commissioner for Human Rights, Office of the High Commissioner, and the Secretary-General, titled “The International Community Must Include Israel’s Violations of Palestinian Refugees’ Rights in its Accountability Framework and Measures.” The statement highlighted that Palestinian refugees and internally displaced persons (IDPs) have been primary victims of Israel’s international crimes since 1948 and continue to be so through Israel’s active denial of their rights as displaced persons and its pursuance of apartheid policies and practices aimed at bolstering a coercive environment and fostering protracted displacement. Namely, Israel has strived to limit the scope of durable solutions to local integration and resettlement, actively denying Palestinian refugees’ right of return despite their entitlement to voluntary return to their homes, together with housing and property institution, and compensation for the loss of or damage to property as a primary durable solution to their displacement. On the basis of these rights and Israel’s respective denial, BADIL’s statement reiterated the international community’s responsibility to ensure respect by Israel of their obligations towards Palestinian refugees and IDPs. Third states particularly hold a negative duty not to encourage, aid or assist Israeli policies and practices of apartheid as well as a positive duty to prevent and put an end to Israel’s ongoing displacement of Palestinians. The statement concluded by insisting that the Human Rights Council must consider Palestinian refugees in setting accountability measures considering that they are entitled to special protection as refugees.