30.07.2012. Kairos Palestine and BADIL Resource Center for Residency and Refugee Rights (BADIL), recently participated in a 12 day speaking tour throughout India. The tour was organized by the Indian Solidarity Ecumenical Network Palestine (ISEN-P)[1]which was established less than a year ago, as a response to Kairos Palestine,  to uphold Palestinian rights and to advocate an end to Israel’s longstanding impunity. ISEN’s main focus is to challenge the Zionist interpretation of the bible and its misused justification of Palestinian suffering; to raise awareness within Indian society as to the political and legal reality in Palestine; and to reach out to Indian policy makers and politicians in order to positively influence their decisions towards the situation in Palestine and Israel.

The tour took place from July 10th – 23rd, and included the Indian cities of Chennai, Bangalore and Delhi. The Kairos Palestine and BADIL representatives conducted a total of 20 lectures, eight interviews (including one press conference) and four meetings with duty bearers, alongside four coordination meetings.

The tour included a theological consultation with the Churches of South India about Kairos Palestine, lectures to students in seminaries and theological institutions of different churches, parishes and encounters with leaders of churches about the Palestinian situation and the correct way of reading the Bible to show solidarity with the Palestinians and to working for justice. 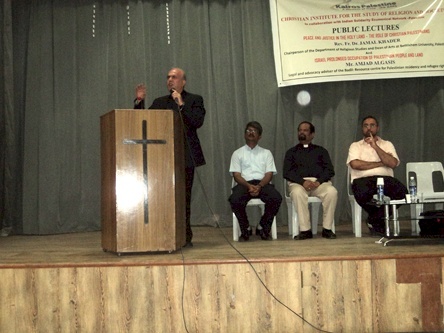 The main focus of the visit was:

1. Enumerating how civil society in India, including churches, minority representatives, academics generally, can express their solidarity with the Palestinian people who have been struggling for the past 64 years in the face of forced displacement, and to discuss ways of supporting the struggle to end the occupation and colonization of Palestine and to ensure justice and peace in the region.

2. To build relationships with the Churches and Theological Institutions to fight against Christian Zionist interpretations of the Bible and to express their “costly solidarity” with the Palestinians.

3. To create deeper awareness of the actual situation on the ground in Palestine.

4.To highlight solutions in accordance with international law, with particular focus on actual implementation; most importantly the Palestinian people's right to return and to self-determination.

5. To emphasize the abuse and misinterpretation of scriptures by Christian Zionist thought that has led to the support of the State of Israel and has condoned the atrocities perpetrated against the Palestinian people.

6. To discuss Zionism as a racist ideological construct for the State of Israel and to compare Hindutva and Zionism; two ideologies that are strikingly similar in content and orientation. Both are ideological constructs that prompt and promote division and suspicion of ‘The other’. They have grown into forms of nationalism that are intolerant of pluralism and seek exclusivist identities for their followers.

7.To seek out ways on how to support the Global Boycott Divestment and Sanctions Movement(BDS) against Israel until it complies with international law and Palestinian rights as well as to support the Indian Campaign for the Academic & Cultural Boycott of Israel.

The tour was a huge success forKairos Palestine and BADIL, allowing it to build a consensus about the root causes of ongoing Palestinian forcible displacement and dispossession, to highlight that only a rights-based approach will guarantee a just and long-lasting solution, and to challenge the misuse of biblical texts to justify Israel’s ongoing occupation and colonization of Palestinian land and people. Additionally, BADIL was able to distribute its publications within more than 15 Indian universities and academic institutions, as well as with a dozen civil society organizations. Furthermore, relationships were forged between BADIL, Kairos Palestine and ISEN so as to ensure a strong, collaborative future working partnership and to support ISEN’s work in India.

BADILand Kairos Palestine would like to express our deepest gratitude to ISEN for the opportunity to participate in this speaking tour and the overall flawless organization of all events, including transportation and accommodation, in India.