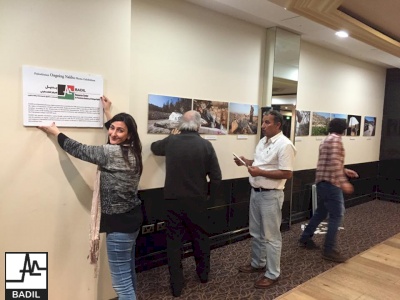 BADIL engaged in a multi-city speaking tour of Ireland, hosted and sponsored by the Ireland Palestine Solidarity Campaign (IPSC). The awareness raising and advocacy tour which included the cities of Cork, Limerick, Dublin and Derry, was part of the IPSC’s annual Nakba commemoration program. BADIL, as the guest speaker, raised the issues of Palestinian refugees and IDPs, the ever widening protection gap, the ongoing Nakba of forcible transfer and the denial of the right of return, Israel’s human rights violations and grave breaches of international law and the unprecedented blanket impunity Israel enjoys from the international community. BADIL also met with representatives of the Ireland Ministry of Foreign Affairs, TDs (parliamentarians) and international partners. The program concluded with the IPSC’s annual Nakba march in Dublin City which was attended by dozens of Palestinians and internationals.

The tour was an opportunity to highlight 3rd party state responsibility in the Palestinian refugee situation, states’ continued lack of political will to hold Israel accountable, and the legitimacy and legality of Boycott, Divestment and Sanctions (BDS) as one of the effective methods of resistance.

The IPSC is a non-sectarian, non-governmental civil society organization with multiple branches within Ireland. The IPSC through a variety of initiatives to raise awareness on the situation of Palestine, promotes Palestinian rights, and advocates for BDS to bring Israel into compliance with international law.