BADIL’s held and participated in several meetings, dialogues and conferences in Geneva and Brussels. 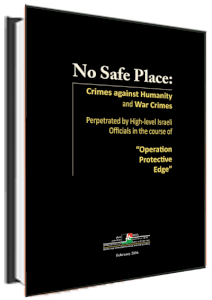 In preparation for the 32nd regular session of the United Nations Human Rights Council, to take place in Geneva from 13 June to 1 July 2016, BADIL Resource Center for Palestinian Residency and Refugee Rights held and participated in several meetings, dialogues and conferences in Geneva and Brussels.

On 4 June, BADIL participated in the Third Conference of the European Alliance in Defense of Palestinian Detainees held in Brussels. The meeting, which was attended by parliamentarians from 14 EU countries, highlighted Israel’s arbitrary detention of Palestinians. BADIL intervention was focused on the illegality of administrative detention, with an emphasis on the recent Committee Against Torture’s (CAT) observations on Israel’s lack of compliance with international law in relation to its treatment of Palestinian detainees. Further, BADIL took this opportunity to brief audiences on and to disseminate recent publication and submission to the International Criminal Court (ICC) titled: No Safe Place.

Furthermore, BADIL attended a dialogue between the ICC Prosecutor and human rights actors under the title of “Accountability as a Common Goal”. The thematic topic discussed was the fight against impunity. In its turn, BADIL highlighted the necessity to end Israel’s impunity and of finding effective mechanisms to ensure accountability for perpetrators of severe human rights violations and international crimes.

In addition, BADIL participated in the annual meetings of the International Labor Organization which took place in Geneva on 26 May 2016. The meetings featured an intervention by the Independent Palestinian Trade Union on the suffering of and discrimination against Palestinian workers by Israel. BADIL’s participation was vital in supporting and lobbying for the call for boycotting the General Organization or Workers in Israel (Histadrut). Though not adopted by unions, the call was supported by the Swiss, Arab, and African trade unions.

With respect to preparation for the 32nd session of the Human Rights Council, BADIL briefed Mr Michael Lynk - the newly appointed Special Rapporteur on the situation of human rights in the occupied Palestinian territory - on Israel’s systematic policies and practices that violate human rights of Palestinian people and individuals including those could amount to international crimes. During this briefing, a range of reports, submissions and different publications issued by BADIL and other Palestinian human rights organizations were presented for the attention of the Mandate.

In addition, BADIL attended the organizational meeting with the President of the Human Rights Council. In the meeting, which was also attended by the Special Rapporteur, BADIL highlighted Israel’s policy of underming the mandate of UN mechanisms, including HRC, treaty bodies and Special Repporteurs. BADIL highlighted the necessity of ensuring the credibility of international law and of protecting the ability of independent investigative bodies and mandate holders to perform their missions. Accordingly, BADIL urged the President of the Human Rights Council and the Special Rapporteur to call upon the international community to condemn and end Israel’s pattern of undermining and weakening of international human rights and its associated justice mechanisms.