The targeting of Palestinian youth in Dheisheh refugee camp continues 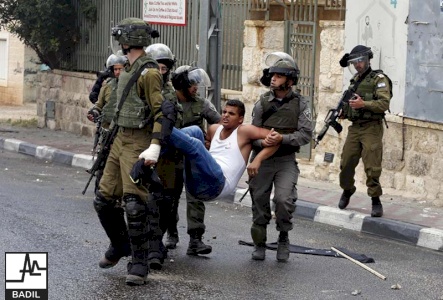 Following two months of increased use of excessive force and illegal threats to Palestinian youth in Dheisheh refugee camp in Bethlehem, this Israeli policy of oppression of resistance and terror by the Israeli occupying forces continues.

A few days before the Islamic Eid al-Adha celebration that started on 12 September 2016, the Israeli forces, and more specifically an Israeli commander responsible for that area known as ‘Captain Nidal,’ called several youth and families from Dheisheh to intimidate them by threatening that he would kill someone in the refugee camp before the Eid celebration.

Two weeks later, on 21 September, Captain Nidal called several youth from the camp again saying that “the time of shooting you in the legs is over.” With this statement Captain Nidal is clearly conveying that threatening to kill or seriously injure youth in the camp is the current military policy in Dheisheh. He is also confirming what BADIL had previously denounced as a ‘kneecapping’ policy by the Israeli occupying forces against Palestinian youth.

On 23 August 2016, BADIL released a report highlighting the systematic targeting of Palestinian youth by Israeli military forces throughout the occupied Palestinian territory (oPt), emphasizing the situation in Dheisheh where 18 youth were shot in the legs, at least 8 of them directly in the knee, between the end of July and mid-August 2016. This policy was coupled with threats such as “I will make all the youth of the camp disabled,” or “I will have all of you walking with crutches and in wheelchairs,” made by Captain Nidal.

The most current threats made since the second week of September reinforce the claim made by BADIL that these threats and actions are not accidental or isolated incidents, but rather result from a systematic Israeli military policy aimed at suppressing resistance, terrorizing Palestinian youth, and causing permanent injuries and damage to their physical and mental well-being.

BADIL would also want to draw attention to the illegality not only of the injuries and the kneecapping policy, but of the threats themselves, as the prohibition on threatening to carry out a prohibited act is recognized in international law. Moreover, such threats are made all the more serious by the numerous instances of residents of Dheisheh being shot in the past two months by the Israeli forces and the permanent injuries they suffer as a consequence.

These cases of intentional wounding, when added to the comparable actions and extrajudicial killings happening throughout the West Bank at large, prove that these incidents amount to a systematic policy and an implementation of Captain Nidal’s threats. These willful and grave breaches of international law trigger the obligations of third party states and other mandated agencies to put an end to this climate of impunity under which Israeli forces and its officials operate.