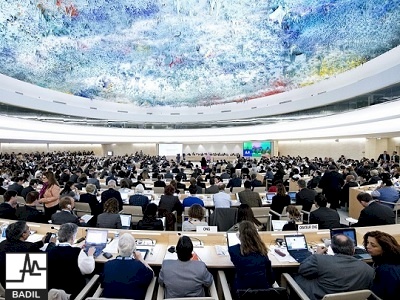 PR/EN/011016/44
As part of its ongoing legal advocacy program and through its special consultative status with the United Nations, BADIL participated in the 33rd session of the United Nations Human Rights Council, which took place between 13 and 30 September 2016. BADIL’s interventions included four oral statements and a side event about the excessive use of force by the Israeli military in the occupied Palestinian territory (oPt).

Oral Statements (videos)
Joint Side Event
On 22 September 2016, BADIL, Al Mezan and Al-Quds Human Rights Clinic held a well-attended joint side event about the excessive use of force by the Israeli military in the oPt especially in the refugee camps, the human rights situation in Gaza and the arbitrary detention of Palestinians. The event, which was attended by approximately 50 UN and non-governmental organization representatives, focused on the systematic Israeli policy of suppressing resistance through targeting and disabling Palestinian youth. BADIL has published a statement highlighting this policy on 23 ِAugust 2016 which has found significant resonance among many actors including online alternative media venues and UNRWA.
Share