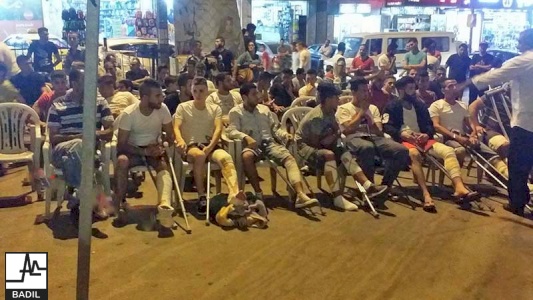 PR/EN/051216/62
More than three months after BADIL highlighted the illegality and gravity of the targeting of Palestinian youth by the Israeli forces, the threats against residents of Dheisheh refugee camp in Bethlehem are still ongoing.

27-year old Bilal al-Saify and his brother, both residents of Dheisheh, were arrested multiple times over the last few years by the Israeli occupying forces. After being released in July 2016, their home was raided on 13 November 2016 by a group of Israeli soldiers lead by an Israeli Shin Bet (Israeli Security Agency) commander who identifies himself as ‘Captain Nidal’, a well-known Israeli commander in the area. Captain Nidal’s notoriety comes from the numerous threats he made to Palestinian youth in the Bethlehem area as well as his aggressive personality (see: Israeli forces targeting Palestinian youth in the West Bank). Al-Saify was summoned for interrogation with the Israeli forces at the 300 Checkpoint, north of Bethlehem, on 15 November. Al-Saify complied and after waiting for several hours at the checkpoint, he was asked to come back the following week as Captain Nidal was busy. Al-Saify went once again to the checkpoint and waited for hours. Again, he was not called for interrogation, and eventually he decided to return home.

On his way back to Dheisheh, he received a call from the Israeli commander who told him, “Hello my brother, I am Captain Nidal. Where are you? And why didn’t you come to the appointment?” The Palestinian youth explained he had done as requested and gone to the military checkpoint on two occasions and waited there for hours. Captain Nidal replied that he should then go to Qalandia military checkpoint, in Ramallah, on 27 November 2016, for interrogation. He was asked to walk through a path dedicated for the use of Israeli military forces.  Al-Saify refused the orders saying that the order was a tactic to get him killed and that it was not normal to ask someone from Bethlehem to go for interrogation to a military checkpoint in Ramallah and that he would go to 300 checkpoint, but not to Qalandia. Since October 2015 six Palestinians have been killed by Israeli forces in the walking path of Qalandia checkpoint. The latest killing took place on 22 November 2016, around the time of the phone call. Following the refusal Captain Nidal proceeded to threaten the Palestinian youth and his family. He told al-Saify that if he did not go to Qalandia, “I will come to you this time and break your head and kill you.” He added that he would also kill his brothers, and arrest his sister and his mother.

The severity of these threats must be assessed in the context of previous threats made by this Israeli commander to other residents of Dheisheh, and the frequency with which they are followed through on by the Israeli forces, also in addition to threats made by other Israeli military and intelligence personnel to Palestinian youth across the West Bank. In July and August 2016, at least 18 youth from Dheisheh were shot in the legs following a threat made by Captain Nidal to make the youth of the camp “all disabled” and “walking with crutches and in wheelchairs.” BADIL’s research shows that these threats form part of a wider policy of suppression implemented in several locations of the oPt.

Al-Saify was intimidated by these threats and after unsuccessfully seeking protection from different bodies, including the Red Cross and the Palestinian Authority, he decided not to go to the interrogation in Qalandia due to fear for his life. After his refusal to follow his orders, Captain Nidal proceeded to call some of the neighbors of the al-Saify family in Dheisheh camp, informing them that they would be responsible if they saw Bilal in his home in the camp and would not notify him. The neighbors immediately informed Bilal of their conversation with Captain Nidal and his intimidation. These calls not only constitute indirect threats to Bilal but could amount to direct threats to the neighbors as well.

BADIL is very concerned by the continuous threats made by the Israeli occupying forces to Palestinian youth and would like to highlight the illegality of these threats, as the prohibition on threatening to carry out an unlawful act is recognized in international law. These actions by the Israeli forces are aimed to induce fear and are made all the more serious by the increase in the use of excessive force to suppress resistance and the targeting of Palestinian youth since mid-2016. BADIL would also like to emphasize that these willful breaches of international law trigger the obligations of third party states and other mandated agencies to put an end to this climate of impunity under which Israeli forces and its officials operate.
Share