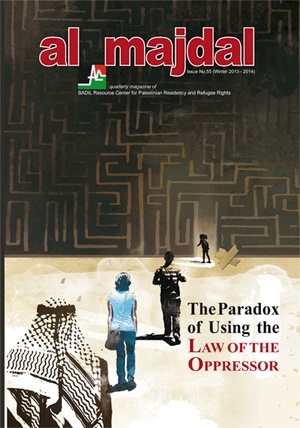 Climbing out of the rabbit hole

Israel’s implementation of protracted occupation, apartheid and colonization is hyper-legalized. This regime is sterilized through the language of law and its violence dispersed through many bureaucratic institutions and complex legislation. In tandem, law is used to criminalize acts of political expression – Palestinian Sheikh Sayah Aturi from the community of al-Araqib was released from detention on 11 December 2013 after he was held for almost a month for his attempts to impede Israel’s 62nd demolition of his village in the Naqab.1 Nearly 5,000 Palestinian political prisoners are currently held in Israeli detention.

Israel’s Justice System is Useless; Why Palestinians should still engage with it

Palestinians’ attempts to seek justice or redress for Israeli violations through the Israeli legal system have largely been an experience of futility. Even when Israel’s Occupation Forces commit the most serious violations of international law, it is rare to see adequate investigations to establish the truth or any attempt to prosecute the perpetrators or secure redress for the victims. Considering the lack of accountability, should we invest in engaging this system?

The year 2009 marked a watershed moment for al-Haq in its approach to seeking justice beyond the Israeli High Court of Justice. In Adalah v Attorney General(2009) al-Haq, Adalah and the Palestinian Centre for Human Rights petitioned the Israeli High Court of Justice to judicially review the decision of the judge advocate general not to launch a criminal investigation into the deaths of civilians and destruction to civilian property in the Gaza Strip during Operation Rainbow and Operation Days of Repentance during the second intifada.

The Reality of Legal Assistance in the Occupation’s Military Courts

Exacerbated by the Oslo negotiations beginning in 1993, Palestinian civil society organizations are constantly navigating the contradictions of providing services to the community while retaining basic political principles. The agreements signed between the Palestine Liberation Organization and the government of Israel, and continuing negotiations make it increasingly difficult for local human rights organizations to hold the Occupation accountable on a local or international sphere.

Any discussion of legal issues related to the Palestinian people must address the laws and customs of international law. The occupied Palestinian territory is subject to customary and conventional international law, including specific conventions applicable to cases of occupation. The most important of these conventions are The Hague Convention Respecting the Laws and Customs of War on Land of 1907 and The Fourth Geneva Convention relative to the Protection of Civilian Persons in Time of War of 1949.

Litigating from Within Lays the Trajectory for an International Legal Strategy

International law is the reference for the work of the Civic Coalition for Palestinian Rights in Jerusalem. However, the Coalition and its 25 members also work within the Israeli legal system on the basis of Israeli law, which is applied to East Jerusalem Palestinians as a result of the illegal annexation, because of the need to provide immediate and practical support to the people at risk of or affected by Israeli land confiscation, home demolitions, forced evictions, revocation of residency permits and forced separation of families.

Litigating in the Occupier’s Court: A Reading of the Palestinian Authority’s Position*

The applicability of international humanitarian law came into effect with the subordination of the West Bank and Gaza Strip to the Israeli occupation in 1967. Both customary law and treaties – the 1907 Hague Convention Respecting the Laws and Customs of War on Land and the 1949 Fourth Geneva Convention on the Protection of Civilian Persons in Time of War – require that an occupying power must be temporary and limit changes to the legal system that preceded it to cases of extreme necessity.

Israeli Military Law: A Tool to Legitimize Oppression and Injustice

The Israeli military law framework, made up of over 1,700 military orders applied to the occupied Palestinian territory (excluding East Jerusalem), is used to sanction and legitimize the implementation of an oppressive and violent prolonged military occupation. Israeli military law works to disconnect individual soldiers, military prosecutors, military judges and others from their choice to implement occupation and deny rights to the Palestinian population. The Israeli military commander of the West Bank attempts to escape responsibility by distancing himself from the legal code (military orders) and also to show its independence, and demonstrate the rule of law notion. Such attempts are lost on us.

The Injustice of the Israeli Judicial System: Experiences of the Jerusalem Legal Aid and Human Rights Center*

Surgical Use of the Israeli Legal System

The Israeli legal system pervasively discriminates against Palestinian citizens of Israel. The Mossawa Center strives to protect the individual and collective rights of Palestinian citizens of Israel from discrimination. In order to do so, our strategy is to advocate at every international and domestic opportunity. Specifically, Mossawa works to combat racism, increase women’s participation in elections, develop youth programs and advocate against the State of Israel’s institutionalized discriminatory practices.

The Palestinian people are subjected to different sets of laws depending on where they live – citizenship in Israel-proper; residency in the Gaza Strip, West Bank and Jerusalem; and wholly denied rights in the Shatat (exile community). The Israeli occupation's discriminatory tiered identification system particularly affects women. Palestinian women marrying men from a territory outside of theirs are extremely vulnerable in the case of a divorce, for example. Depending on where they are born, their children may end up with no identity at all, or they may be separated permanently from their mother in cases of contested custody.

Law as Tactic: Palestine, the Zapatistas, and the Global Exercises of Power

While the Palestinian struggle has its contextual specificities, the violence, dispossession, and disenfranchisement that Palestinians experience daily is not unique to them even in the present moment. Whether their condition is one conceptualized as “statelessness,” “occupation,” or “second-class citizenship,” that Palestinians must appeal to external sites and institutions for their “rights” renders their contemporary condition not unlike that of many people worldwide whose States, having undergone neoliberal restructuring in the last decades, have intensified their police functions and lost their effectiveness as sites where social inequalities could be directly addressed.1

The question of how Palestinians should engage with the Israeli legal system is complicated for prisoners and detainees whose current and future situations, both individual and collective, are inherently intertwined with that system. Some prisoners reject the system completely such as when Palestinian prisoner Marwan Barghouti notably refused to present a defense to his 2002 charges, maintaining that the trial was illegal and illegitimate, or when 70 detainees in Ofer Prison refused to attend their military hearings in 2012. However, despite the symptoms of illegitimacy in the military court system including a systematic lack of due process (and over 99.7 percent conviction rate), the majority of detainees do attend their hearings and trials, and lawyers from human rights groups like Addameer continue to seek justice in individual cases through the legal system. In addition, prisoners, former prisoners, and human rights Non-Governmental Organizations have attempted to further collective rights by appealing to Israel’s Supreme Court and using international law mechanisms.

“When we sit to judge, we are being judged”: A Call for the Establishment of a Database of Israeli Judicial Complicity in International Law Violations

When I first started litigating Palestinian human rights cases in the Israeli Supreme Court1 in 1995, there were only about a dozen lawyers regularly involved in the business. Then, there were three strategies employed for cases regarding the West Bank including East Jerusalem. The first was to buy time – to prevent house demolitions, land confiscations, the denial of residency and to stop the torture. The second strategy among some of us was to litigate as a form of documentation, especially for future reparations and transitional justice tribunals. The third strategy was based on a naiveté that still existed then: that the Israeli Supreme Court could be persuaded to rule in favor of justice and equity in its policy toward Palestinians in the occupied territory. The theory for this last strategy was based on the fact that the Court decided to take on the legal responsibility for the actions of the occupation forces beginning in the early 1970s.2