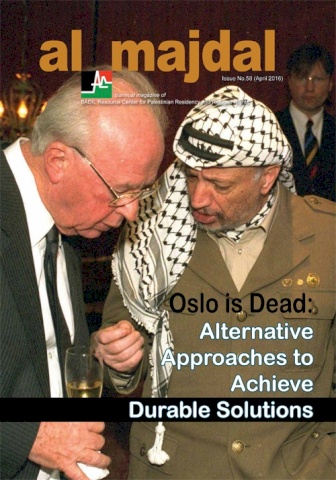 27 April 2016 BADIL releases the April issue of al-Majdal (#58), titled “Oslo is Dead: Alternative Approaches to Achieve Durable Solutions”. In March 2015, BADIL surveyed over 3,000 Palestinian refugees in the West Bank, the Gaza Strip, Jordan and Lebanon and asked them about their preferred pathways to achieve durable solutions. This issue of al-Majdal starts by analyzing the results of this specific question and then explores the most preferred pathways chosen by the refugees. Al-Majdal no. 58 brings back to the fore the long-neglected refugee voices and offers an in-depth overview of the possible alternatives to Oslo available to and chosen by Palestinians.

Palestinian refugees and Internally Displaced Persons (IDPs) worldwide suffer from a grave ‘protection gap’, which refers to the lack of protection they are entitled to in accordance to international law. Individual states bear the primary responsibility for protecting the rights of their citizens and those subject to their authority and jurisdiction. In light of Israel’s failure to afford this protection to Palestinian refugees, the international community has an obligation to protect the rights of Palestinians, in particular the right to self-determination and the right of Palestinian refugees and IDPs to reparation (repatriation/return to their homes of origin, property restitution, compensation and non-repetition).

In BADIL’s Survey of Palestinian Refugees and Internally Displaced Persons 2013-2015, a questionnaire was conducted to examine the perceptions of Palestinian refugees residing in UNRWA camps with regards to their knowledge of international protection and their preferred paths to durable solutions. Specifically, this article analyzes the results of one of the most significant questions of the questionnaire: what are the three most important pathways to achieve durable solutions for the Palestinian refugees? The questionnaire was completed by Palestinian refugees in the Gaza Strip, the West Bank, Jordan and Lebanon, who were given ten options to choose from (see table below). This article examines the overall results in all the areas, the results of each area separately and provides possible interpretations for the variations.

End apartheid, freedom and equality for all

Liberation movements in South Africa set the agenda with an overall goal to end apartheid and achieve freedom and equality for all. This goal and vision is encapsulated in the Freedom Charter which was adopted in 1955 at a people’s congress held in Kliptown near Johannesburg.1 The adoption of the Freedom Charter followed months of wide scale consultation by volunteers who crisscrossed the country asking people about the kind of South Africa they would want to live in.2 Since then, liberation movements, civil society and solidarity groups steered in the same direction to realize the overall goal.

UNSC sanctions on Israel was the second most prefered pathway chosen by Palestinian refugees (50.8%); see p.5

These are dark days for those suffering the loss of country and means of subsistence, displacement, the denial of self-determination and other human rights that accompany the breakdown of peace and security. These days are gravely disappointing also for those seeking a UN Security Council (SC) that fulfills its UN Charter-based mandate to bear the “primary responsibility for the maintenance of international peace and security.”[1] In light of the current conflict in Syria, for example, any evaluation of the SC’s performance would not be favorable. Even UN Secretary General Ban Ki-moon has admitted that the SC is failing because of great power divisions that have prevented effective action to end the loss of hundreds of thousands of lives and driven the biggest refugee exodus in generations.[2]

The ICC and the ‘Situation in Palestine’: Political Sensibilities and Procedural Hurdles

The ICC was the third most prefered pathway chosen by Palestinian refugees (42.4%); see p.5

The Israel/Palestine context has long needed a game-changing moment. Since early 2015, when Palestine’s years-long struggle to trigger the International Criminal Court (ICC) jurisdiction came to fruition, the question is whether the Court’s potential role will fit the bill. In BADIL’s survey of refugees living in UNRWA camps in Jordan, Lebanon, the West Bank and Gaza about their three preferred channels to bring about a ‘durable solution’ to the conflict, 43 percent listed the ICC – a third place finish, behind the options of Security Council sanctions and supporting the BDS movement.

Using other forms of resistance

Other forms of resistance was the fourth most prefered pathway chosen by Palestinian refugees (41.8%); see p.5

Surely, few observers can claim to be surprised by the call from Palestinian refugees for a rethink as to the ways in which a permanent solution to the refugee crisis is to be achieved?

It is, of course, true that formal, legal frameworks exist which could adequately address the Israel-Palestine crisis, and its attendant mass, forced displacement of Palestinians; displacement evident both within the boundaries of  Historic Palestine and beyond. Indeed, the total combined population of Palestinian refugees and IDPs now stands at some 7.9 million, representing the single largest refugee population on the planet.[1] Such frameworks are constructed from assorted instruments of international law, including treaty, statute and UN resolutions.[2] The common characteristic of such instruments is their focus on the respect for and protection of human rights, and in adopting such a focus, these essential universal principles are elevated above the muddied and treacherous waters of political expediency. Yet, in the case of Palestinian displacement, these frameworks continue to be abused or, more commonly, neglected altogether by international power brokers.[3]

Yusif Sayigh (1916 – 2014) is widely known as an expert on Arab economic development, as former Director of the Economic Research Institute and Chairman of the Economics Department at the American University of Beirut (AUB), and for his work with the Palestinian Liberation Organization (PLO) on strategic planning of resistance and economic development, including creation of PEDRA (Palestine Economic Development and Reconstruction Agency, later PECDAR). Compiled and edited by Rosemary Sayigh, anthropologist and Yusif’s partner in life for more than five decades, with the compassion for people and the ordinary that is characteristic of her oral history work,[1] the memoirs of YusifSayigh are, however, more than just another biography of a public figure.

I wish some heavy rain

I wish some heavy rain
to wash the blood stain;
to rest and calm my fears
and Tal Rumeida's pain.
My dream is peace and justice
and ending that chain
of murdering, killing, shooting.
Can you tell me what we gain?
Hatred breeds more hatred.
Love can end the pain.
I dream of sunshine coming to meet the rain;
to spread that love around despite what has remained.
Do you know what has remained?
Barriers, borders, walls;
killing, shooting and drones.
And that dream again
occupying my brain;
the dream of heavy rain
washing the blood stain;
ending occupation
and feeling life again.