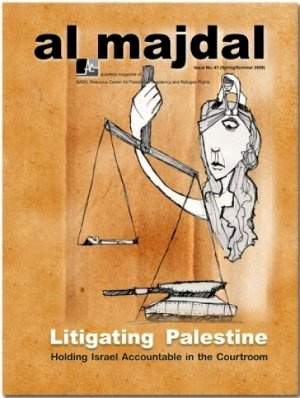 This issue of al-Majdal draws on the research and experience of the participants in the Israel Review Conference (http://israelreview.bdsmovement.net), and the topics on which they focused to provide an overview of routes, challenges, and recommendations for “Litigating Palestine.” They evaluate past attempts at taking Israel and its abettors to court, assess the role of law in attaining justice for victims, and – perhaps of particular interest to non-lawyers – the role of civil society in supporting legal battles to attain justice for Palestinians.

A recurring theme is the consistent interference of executive and legislative branches of government to shield Israel and its agents from prosecution. Susan Akram and Yasmine Gado's article on civil tort claims in U.S. courts shows how the U.S. government has consistently interfered to ensure that courts dismiss Palestinian cases on procedural and jurisdictional grounds. Bill Bowring looks into the situation in Europe making it clear that Palestinians “do not have the possibility of addressing complaints to” the European Court of Human Rights and the European Court of Justice.

Contributions in this issue also explore possibilities for legal action that can potentially overcome – or at least bypass – some of these limitations, by targeting third parties. John Reynolds describes the case targeting the U.K. government as a third party complicit in Israeli violations. Deborah Guterman examines the case of Quebec courts against Canadian corporations involved in the construction of Israeli colonies in the West Bank. Karen Pennington and Joseph Schechla revisit US courts in an examination of whether recent precedents targeting Islamic charities may reopen the door to challenging the Jewish National Fund and other Zionist para-state organizations as charitable organizations in that country.

Holding Israel Accountable - Yes We Can

For many civil society actors involved in struggles against racial discrimination, the 2001 World Conference against Racism in Durban, South Africa seemed to be a turning point. Blacks, Dalits, Indigenous nations of the Americas, Roma, Palestinians, and other racialized communities carried each others’ banners and took up each others’ cries for a world without racism and apartheid. There was ample reason to hope that global civil society had achieved a victory in the quest for redress after centuries of racist oppression.

The civil society consensus emerging from Durban crystallized around a set of clear demands: vapid verbal condemnations of racism were not sufficient; perpetrators and benefactor states of racism and colonialism needed to make structural changes and pay reparations for their actions in accordance with international law.

But the states implicated were not interested in taking any meaningful responsibility. They responded with a Zionist-led offensive that used the groundswell of support for the Palestinian cause to smear the conference as an “anti-Semitic hate-fest.” This phrase was picked up and disseminated by Western states and their corporate media machines, attempting to turn Durban into a four letter word. Two days after the conference, the 9/11 attacks in the United States took place, and the world’s attention shifted to the “war on terror.” Any attempt to challenge the powerful myth-making about the Durban Conference became futile.

The Jewish National Fund (JNF), a.k.a. Keren Keyemeth le Israel, Inc. (KKL), has a long and obscure legal existence in the United States that occasionally has come to light in open court.  This article addresses the history of selective U.S. legal and diplomatic action concerning the JNF. The JNF’s U.S. arm defines itself as a charitable organization, thus claiming and enjoying tax exemption with its associated para-state organizations, only once effectively challenged since 1926. The context and arguments of domestic U.S. jurisprudence now may suggest a new direction for U.S. federal courts to reconcile some of the related legal contradictions that also having grave consequences for US foreign policy towards the Middle East, but primarily for the direct victims of Israel’s para-state institutions.

The village of Bil’in will face-off this summer against two Canadian corporations accused of aiding and abetting the colonization of the Occupied Palestinian Territory.

Bil’in has charged Green Park International and Green Mount International with illegally constructing residential buildings and other settlement infrastructure on village land, and marketing such structures to the civilian population of the State of Israel in contravention of International and Canadian Law.

Under the stewardship of Ahmed Issa Abdallah Yassin, the Bil’in Village Council will attempt to hold the multinationals accountable for violations of Palestinian human rights. Perhaps more importantly, the lawsuit will, if obliquely, attack the legality of the Israeli settlement project.

Writing the Disappearance of Palestine

Disappearing Palestine was my third book in three years, and the one that was least planned. Trained more as a journalist than as an academic, I prefer to work “on the hoof” – and against deadline – covering the latest developments in the region. But at the same time I think a worthwhile book must take account of the bigger picture, connecting the dots for readers, and offer a deeper analysis than that provided by our media – and, sadly, by many of our academics too.

Also, writing a useful book about Israel demands that one set aside fears of potential slurs on one’s character.

In each book I have sought to marry the academic and journalistic approaches, respecting the need for sourcing, intellectual rigor, and the concentration on significant and enduring themes while trying not to sacrifice topicality. It is always a difficult balance. But things are moving so fast on the ground here that a meaningful analysis requires familiarity with day-to-day events and developments, the modus operandi of most journalists rather than academics.

Towards the end of Emile Habiby’s novel The Secret Life of Sa’eed, the pessoptimistic protagonist looks out the window of the police vehicle disappearing him to prison. Sa’eed notices that they are driving through the plain of Ibn Amir, which he tells the Israeli police.

“’No, it’s the Yizrael plain!’” corrects the policeman. This is just one of many scenes in Habiby’s absurdist novel that illustrates the disappearance of people and places in 1948 Palestine. Elia Suleiman’s 1996 film Chronicles of a Disappearance, in a style similar to Habiby’s also makes use of this theme of Palestinian disappearance. It makes sense that one of Palestine’s leading novelists and one of its leading filmmakers would illustrate the absurdity of disappearance as an existential crisis for Palestinians since the Nakba given the reality disappearance plays in daily life.

Waltz With Bashir: A Case Study on the Complicity of the Israeli Cultural Industry with Israeli Apartheid

The film is an animated story of the filmmaker himself who, years after the Israeli invasion of Lebanon in 1982, is compelled to look into his past when an old friend tells him that he suffers from nightmares about his army service, making Ari realize that he remembers almost nothing about that time in his life. He sets about contacting soldiers from his unit to piece together snippets of memory of their participation in the invasion. The film depicts the invasion of Lebanon in graphic animated detail, culminating in Ari’s belated recollection of his unit’s participation in the Sabra and Shatila massacre. The images of the massacre in the film were all too similar to those we saw on the news of the horrors inflicted on the people of Gaza, and reviews were quick to point out the timely release of the film.

Several States Downgrade Relationship with Israel in Protest over Assault on Gaza
January 2009 – Bolivia and Venezuela cut ties with Israel, shutting down Israeli embassies in their countries. Meanwhile, Qatar and Mauritania froze ties with Israel, and Jordan recalled its ambassador as an act of protest against Israeli assault on the Palestinians of the Gaza Strip.

As UN Blocks Palestine-Related Side Events at Durban Review Conference

Representing over 170 Palestinian civil society organizations, the Palestinian Boycott, Divestment and Sanctions National Committee (BNC) launches its Israel Review Conference under the title: “United Against Apartheid, Colonialism and Racism: Justice and Dignity for the Palestinian People.”

Thousands of people have gathered in Geneva from all corners of the globe to attend the Durban Review Conference.

Bethlehem – South African anti-Apartheid leader and union official Ziko Tamela is in the Israeli occupied West Bank this week to gain insight into the Palestinian reality on the ground and to forge stronger links for solidarity work.

Like many we had hoped that the Durban Review Conference would accomplish its objectives and not only reaffirm the Durban Declaration and Program of Action (DDPA), but also evaluate progress and strengthen its implementation. Today we feel that little of that has been achieved.

BADIL is proud to announce the winners of the 2009Al-Awda Award, the third annual public competition of its kind. The award aims to foster Palestinian talent and creativity and to raise the profile of the Palestinian Nakba and the right of all forcibly displaced Palestinians to return to their homes and lands.

To our steadfast Palestinian people,

As we live through the effects of sixty-one years of the Nakba, as the Arab-Palestinian people face the cruelest forms of torture and oppression, our struggle for dignity undergoes one of its most difficult moments.

As Israel Prepares Laws to Deepen its Discrimination, the World Must hold Israeli Racism to Account

For decades Israel has practiced discrimination and forced displacement against its Palestinian citizenry with impunity. But now it seeks to impose consent for its crimes upon its Palestinian victims.

Violations of human rights and humanitarian law, particularly when systematically carried out with no regard to their consequences, demand that other states and international organisations not simply take notice, but take action. The legal basis for proportionate and “effective” (1) responses to such violations are gaining momentum through an emerging international legal principle of the responsibility to protect, which forms part and parcel of state responsibility. The responsibility to protect is firstly a duty to ensure that mechanisms are in place to prevent violations from taking place (2) and secondly a duty of states, acting in their individual or – ideally – collective capacities, to intervene in order to protect civilians from potential or further violations.(3)

Introduction: The ‘Legalisation’ of the Discourse on War

Israel’s most recent large-scale offensive against the Gaza Strip, Operation Cast Lead, initiated on 27 December 2008 and continuing until 18 January 2009, generated an unprecedented level of debate in the media and public domain over questions normally confined to the obsessions of lawyers and legal scholars.

Commentary—ranging from the well-versed to the uninformed—on issues such as grave breaches of the Geneva Conventions, the doctrine of proportionality, and the legality of the use of force under the UN Charter, pervaded newspaper and website coverage on a daily basis, and continues to do so.1

This is broadly reflective of the fact that opposition to war in the 21st century, be it in the context of the invasion of Iraq, South Ossetia or Lebanon, has increasingly been framed in legal terms. In contrast to World War II or Vietnam, the strategy of opponents of such conflicts has been to denounce the initiation and conduct of hostilities less on the basis of their immorality, and more on the basis of their illegality. At the same time, the military establishments of the States involved are acutely aware of the ‘legalisation’ of the vocabulary through which war is analysed, and the consequent need to find ways to justify their actions as compliant with international law.