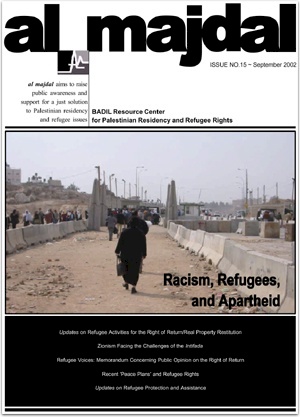 Over the past year, the Israeli government has responded to Palestinian demands for an end to the occupation, equality inside Israel, self determination and implementation of the right of return of refugees with increasingly overt forms of racial discrimination, ongoing displacement and attacks on Palestinian refugees. Al-MAJDAL no. 15 examines these new Israeli measures, which bolster forced segregation and raise serious questions about the feasibility of a two-state solution, and analyses them as part of an emerging Israeli apartheid regime over all of historic Palestine (Israel and the 1967 occupied Palestinian territories).

September 2002 marked the first anniversary of the launching of a global campaign to end Israel's brand of apartheid. The campaign was inaugurated in Durban, South Africa at the 2001 World Conference against Racism (WCAR). September 2002 also marked the second anniversary of the second Palestinian uprising - al-Aqsa intifada in the 1967 occupied Palestinian territories. Over the past year, the Israeli government has responded to Palestinian demands for an end to the occupation, equality inside Israel, and implementation of the right of refugees to return to their homes of origin with increasingly overt forms of racial discrimination, ongoing displacement and attacks on Palestinian refugees, and new measures that bolster forced segregation and apartheid.
In the 1967 occupied Palestinian territories the Israeli government continues to advance polices and underwrite practices - including the expansion of the network of colonies (i.e., settlements), confiscation of Palestinian land, and demolition of Palestinian homes - that aim to permanently alter the demographic, ethno-national composition of the West Bank, including eastern Jerusalem, and the Gaza Strip. Freedom of movement of the Palestinian population between cities, towns and refugee camps is virtually non-existent, while freedom of movement within population centers is severely restricted by ongoing rolling curfews that keep Palestinians locked in their homes for days and weeks on end.

Israeli Jewish colonists (i.e., settlers) meanwhile, continue to move in and out of the occupied territories on the specially constructed 'bypass roads.' Palestinian civilians, moreover, have born the brunt - in lives, injuries, damage to homes and properties etc. - of Israel's military campaign to suppress the Palestinian uprising. There is no apparent distinction between civilian and combatant in Israel's selfdeclared' war on terrorism' in the occupied territories. The July  extra-judicial killing of Hamas activist Saleh Shehada, which left more than a dozenother Palestinians dead and 140 injured, including women and children, is only one example.

Commentary: Zionism Facing the Challenges of the Intifada

Sometimes we wonder how Israeli society can remain immune to the daily pictures of destruction, killing and collective punishment in the 1967 occupied Palestinian territories in this intifada. We
wonder about the mechanisms by means of which Israeli society can perceive itself as the victim of aggression while the arrogance of power is endorsed publicly and widely.

The key to understanding current Israeli attitudes towards the Palestinian intifada lies in a propaganda mechanism which has been employed by the Zionist leadership in times of crises since the early days of the Zionist colonization of Palestine: The Israeli people are told that the "crisis is existential, a question of to be or not to be." The notion of the "existential crisis to Zionism" is shared by part of the Israeli leadership and the mainstream media

UPDATE:Campaign for the Defense of Palestinian Refugee Rights

All Out for Palestine - Third National Al-Awda Demonstration (Chicago): On 29th September al- Awda, The Palestine Right to Return Coalition held its third National Demonstration. Participants commemorated the 2nd anniversary of the intifada and the 20th anniversary of the Sabra and Shatila massacre. A march and rally was held in downtown Chicago to draw the public's attention to the dire situation in Palestine, the plight of the Palestinian refugees, Israel's gross human rights abuses and the suffering it has inflicted over 54 years, and commemorate and honor those lost in the 1982 massacre of Sabra and Shatila in Beirut, Lebanon. For more information about the rally see the al- Awda (US) Palestine Right to Return Coalition website, http://al-awda.org.

War Crimes:Update on the Case Against Sharon

On June 26 a Belgian Appeals Court ruled on narrow procedural grounds that Belgium did not have jurisdiction to prosecute Ariel Sharon on charges of genocide, war crimes, and crimes against humanity for the 1982 massacre at Sabra and Shatila based on the fact that Sharon was not on Belgian soil. On July 3, lawyers representing 23 survivors of the massacre lodged an appeal on the grounds that the condition on which the case was rejected (i.e., presence of the accused on Belgian soil) was not entailed or foreseen by Belgium's 1993 law on universal jurisdiction.

On 17 July an agreement was reached between major Belgian political parties to safeguard the essence and guiding principles of Belgium's law on universal jurisdiction. The agreement confirms the will, already expressed by the legislature in 1993, that complaints against presumed perpetrators of crimes against humanity, war crimes and genocide are admissible, even if the accused parties are not on Belgian territory. The agreement, however, limits victims' invocation of universal jurisdiction to particular cases.

Israeli Cabinet Recommends Restricting Land Use in Israel to Jews : On 7 July 2002, the Israeli cabinet, in a vote of 17-2, recommended the adoption of a new bill to restrict access to 'state land' to Jews only. The vast majority of so-called state land was acquired by Israel through the mass expropriation of refugee properties. The proposed bill by MK Haim Druckman (Mafdal) was formulated as a response to a High Court decision on 8 March 2000 (See al-Majdal, Issue No. 5), which upheld the right of Adel and Iman Qaadan, a Palestinian couple from Baqa al-Gharbiyya in the Galilee to lease a plot of land and build a home in the nearby Jewish 'lookout' settlement of Katzir.

Katzir was jointly established by the Jewish Agency and the Katzir Cooperative Society in 1982 on 'state land' allocated by the Israel Lands Administration (ILA) as partof a project to prevent the development of large contiguous Palestinian areas in the Galilee. The Cooperative Society only accepts Jewish members.

During the past several months no major initiatives have been undertaken by the international community to rectify the protection gap facing Palestinian refugees in the occupied territories and elsewhere apart from continued assessment studies of humanitarian conditions. Humanitarian relief has become a substitute for effective international political intervention.

PLO Report on Double Standards : The degree to which the international community has adopted a double standard with regard to the implementation of international law as a foundation for resolving the Israeli-Palestinian conflict was clearly documented in a report prepared by the PLO Negotiations Affairs Department in late September. The report, entitled, Double Standards, How the International Community has Taught Israel that it is Above the Law, documents the record of the international community dealing with the implementation of UN resolutions around the world concerning grave human rights violations and violations of humanitarian law; colonies and demographic manipulation; the right to return of refugees and displaced persons; and the obligation to withdraw from territories subjected to armed occupation.

International protection involves the direct protection of refugees' human rights on a day-to-day basis, and the search for and implementation of durable solutions. Durable solutions include repatriation, host country integration, and third country resettlement. Housing and property restitution is among the rights associated with refugee repatriation. The primary principle governing each of the three solutions is voluntariness or refugee choice. Among the three solutions, only repatriation or return is a recognised right under international law

Campaign for the Defense of Palestinian Refugee Rights

The commemoration of Palestinian Land Day this year coincided with the ongoing Israeli reoccupation and military siege of Palestinian cities, villages, and refugee camps in the 1967 occupied Palestinian territories and the US-UK led war against Iraq. The so-called ‘preemptive war’ provided yet another example of the double standard that governs US-UK foreign policy in the region. Both the United States and the UK have emphasized the importance of upholding Security Council resolutions and international law in the months since the adoption of Security Council Resolution 1441. UN resolutions affirming the right of Palestinian refugees and IDPs to return and repossess their properties meanwhile remain unimplemented.

International assistance involves a range of activities that meet the basic needs of refugees including food, shelter, health and education. Certain assistance activities may also be considered to have protection functions.

Funding
In late September 2002, UNRWA informed donor governments that the Agency faced a budget deficit of $17 million for 2002. The deficit comes as the Agency tries to cope with the worst humanitarian crisis in the West Bank and Gaza Strip since 1948 stemming from Israel's military campaign to crush the Palestinian uprising. In response to growing concerns about the impact of austerity measures on Agency services, refugees in Lebanon in the camps of Nahr al-Barid and Badawi staged a strike in Tripoli in front of the UNRWA offices in late August to protest against the reduction of services in the two camps. Refugees from Ein al-Hilweh also staged a strike against the reduction of services.

The following statement was endorsed by 80 Palestinian refugee community organizations and hundreds of individuals in the Middle East and the wider Palestinian exile in October 2002.

We Palestinians, the undersigned, reaffirm our right to return to our homes from which we were displaced in 1948, just as we have reaffirmed this right throughout the past 54 years of exile. We reaffirm that the right of return is a basic human right as set forth in international law and UN General Assembly Resolution 194.

In September 2001, one year after all international efforts at halting Israel's violent military repression of the second Palestinian
uprising in the occupied West Bank and Gaza Strip had failed, some 3,000 civil society organizations from around the world met at the third World Conference Against Racism in Durban, South Africa and approved their NGO Declaration and Program of Action.