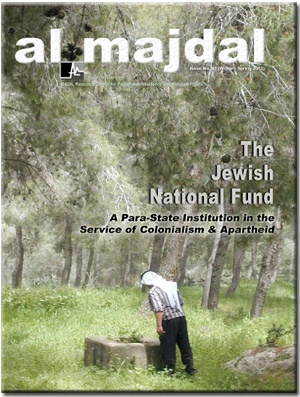 In this issue of al-Majdal, we look at the Jewish National Fund from various vantage-points. Joseph Schechla examines the ideological roots of Zionist organizations such as the JNF. He shows how the conflation of religion, race, nationality and citizenship, and its incorporation into Israeli law and statutes of Zionist agencies constitutes the pillar of the colonial apartheid regime that harms not only Palestinians but also Jews worldwide. Alaa Mahajna situates the JNF in Israel’s legal regime over land, analyzing recent changes to Israel’s land laws in this light. Mahajneh’s analysis is supplemented by a useful diagram prepared by attorney Usama Halabi that provides a visual map of Israel’s legal regime over land.

Ahmed Abughoush, Vivian Tabar, and Yeela Raanan provide us with case studies from both sides of the green line. These are complimented by a photo-story that describes what one would see on a visit to the JNF’s Menachem Begin park built on the ruins of the Palestinian villages al-Qabu and Ras Abu Ammar. Dan Freeman-Maloy attempts to untangle the workings of the JNF within the web of Zionists lobby, community and fundraising organizations operating in North America. Finally, Sofiah Macleod and Sara Kershnar provide us with an overview of already existing campaigns to challenge the JNF, providing a starting point for discussions on how to develop such campaigns in the near future.

Editorial: Knocking Down the Colonial Pillar of an Apartheid Regime

For anyone taking a road trip along the highways of the part of Palestine that became Israel in 1948, one is bound to spot a blue and green structure in the shape of a bird marked with the Hebrew letters KKL, which stands for Keren Kayemeth L’Yisrael, the Hebrew name of the Israeli branch of the Jewish National Fund (JNF). All around the bird one will see expanses of forests planted sometime in the past few decades. A walk through one of these forests will take the visitor past fruit trees, cactus plants, terraced hillsides, and the ruins of buildings. In some cases, these ruins are explained in a JNF brochure pointing to their ancient history, in other cases, one is left to the devices of one's imagination. In all cases, these sites are what remains of some of the more than five hundred villages depopulated and destroyed through the course of Israel’s establishment, the homes of millions of Palestinian refugees struggling to return to them for over sixty years. By walking through a JNF park or forest, one inhales the fresh smell of the green-washing of Palestine’s Nakba.

This open letter to Palestinian President Mahmoud Abbas was first published in Arabic by Ma’an News, Palestine, in early March 2010.

Since the adoption of the strategy of the “peace of the brave” which seeks to achieve Palestinian rights through negotiations, Palestinian officials have never missed an opportunity to raise the demand for the international community to intervene and ensure respect of its international law and UN resolutions. And while the Palestinian leadership had limited its own strategic options in the public relations battle around the peace negotiations, the demand for enforcement of international law preserved a certain “logic” in midst of the general deterioration, in particular the disintegration of the Palestinian political system.

The Consequences of Conflating Religion, Race, Nationality and Citizenship

Much has been written, forgotten and written again over the past century on the subject of Zionism and Israel’s unique civil status categories and corresponding practices. For a person with a long life and memory, it may be surprising to find that the crucial distinction between nationality and citizenship in Israel is news to so many people concerned with the conflict and problem of Zionism. Understandably for observers not regularly engaged in the conflict, such as human rights treaty body members, the concept has been a revelation.1

The Palestinian village of Imwas, together with the villages of Yalu and Beit Nuba, were razed to the ground in the 1967 war. In the mid-1970s, the Jewish National Fund (JNF) used donations from its Canadian branch to establish Canada Park on the lands of the three villages. We spoke with Ahmad Abughoush, president of Lajnet Ahali Imwas (Imwas Society) about the plight of the village, the villagers, and their attempts to return home.

Insulting the Memory of an Anti-Apartheid Activist

The Jewish National Fund and the Coretta Scott King Forest

In recent years, the Jewish National Fund (JNF) has announced its plans to rebuild a section of the Birya forest, located in the Galilee, and to name it after the late Coretta Scott King, the renowned civil rights and anti-apartheid activist and wife of Martin Luther King Jr. The Coretta Scott King Forest is being built as part of ‘Operation Northern Renewal,’ a $400 million JNF campaign that aims to rebuild its forests in the North that were destroyed during Israel’s brutal assault on Lebanon the summer of 2006.

In this explanatory diagram, attorney Usama Halabi attempts to chart Israel's regime over land by situating the key institutions (Israel Lands Authority, Jewish National Fund, Israeli Development Authority) as well as the most important of Israel's laws over land in relation to one another.

I grew up Jewish in the Naqab (Hebraized as Negev). As a child I enjoyed picnics in the Yattir forest, located in the northern Naqab. I asked how it could be that the man-made forest of Yattir is thriving, yet there were no natural forests in the surrounding area. I was told that it was because of the black goats of the Bedouin. They ate all the vegetation, making the land a desert.

Photo-story: A Trip to al-Qabu

On a trip to find the Palestinian village of al-Qabu, destroyed and depopulated by Israeli military forces in October 1948, one encounters the ways in which the Jewish National Fund's parks and forests have altered the Palestinian landscape. The following photographs give a small sense of how this is done.

One of the main challenges in trying to analyze the Palestinian-Israeli context is the ever-changing dynamics taking place on the territorial-political level. Time and space are complementary elements of the complex apparatus shaping and re-shaping the “reality on the ground.”

Michael Dumper, The Future for Palestinian Refugees: Toward Equity and Peace (Boulder and London: Lynn Rienner, 2007)

This book offers an introduction to the Palestinian refugee question in a format geared primarily towards policymakers and academics. It covers a broad range of ground and for that reason the book can be a useful tool for activists as well.

Advocating Palestine in the United Nations

Follow-up on the Goldstone Report, UN, New York - in November 2009, the UN General Assembly had endorsed the report of the Fact Finding Mission on the Gaza Conflict (“Goldstone Report”) and called upon the Israeli and the Palestinian sides to conduct investigations into the serious violations of international human rights and humanitarian law in line with the Goldstone recommendations. Since then, Israel has not implemented investigations in conformity with international standards, and the Palestinian authorities have equally failed to comply with the requirements of the UN. In February 2010, three of the six months alloted to the domestic investigations had lapsed and an initial assessment was due by the UN Secretary-General. The latter, however, failed to assess the measures carried out by the parties of the conflict, and the General Assembly decided to extended the period for the investigations at the domestic level for another five (instead of the initial three) months.1

Joint submission to HRC: Distressing Lack of Accountability and Justice for the Victims of the Conflict

European BDS Organizations Campaigning to” Give Israel the Red Card”
7 October 2009 – 18 European organizations involved in the BDS campaign launched an effort calling on FIFA to live up to the letter and the spirit of its statutes and to seize this opportunity to prove to the world that it stands for a more just world by sending Israel an unmistakable threat of exclusion. This would be an important victory for human rights -- not only for the Palestinian people, but also for the international football community.