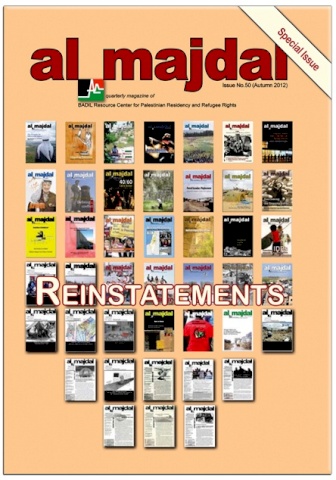 This Special 50th Issue consists of a hand-picked selection of articles, some from earlier issues, while some are more recent. We thought to present our readers with a 'guide book' on the ongoing Palestinian displacement, its historical, ideological, and political causes since the Nakba, as well as the rights-based, approach to the right to return as supported by international law. We also include a brief insight into BADIL's involvement in the current affairs, through its partnership in the Boycott, Divestment and Sanctions (BDS) campaign. Every article in this selection is followed by recommendations for further reading materials from previous Al-Majdal publications. The articles recommended as part of this further reading offer in-depth analysis of study cases which elaborate upon the general topics presented in the Special 50th Issue.

we are happy to present to you this Special 50th Issue of Al-Majdal.

This is an opportunity for us to stop, look back and assess our progress since the launch of this magazine in 1999. It’s amazing how time passes. It’s even more amazing how things have not changed. The first editorial of Al-Majdal set the course for BADIL’s rights-based approach, in light of the ‘peace process’ at the time. BADIL Staff, the authors of most of our editorials, felt it was important to clarify that:

Different UN agencies have now adopted a human rights-based approach to their development cooperation, known as “The Human Rights Based Approach to Development Cooperation Towards a Common Understanding Among UN Agencies”, and the resulting experience, literature and debate prompted by this move has served to greatly enrich the concept both in theory and practice. Nonetheless, there is still no single agreed rights-based approach dealing with all aspects of peoples, groups and individual concerns; there is no workable approach which caters for different situations and issues worldwide. There is, however, a general consensus as to the basic constituent elements of such an approach, which in turn would enable concerned actors to design unique rights based systems and processes which fit particular situations, issues or causes. This commentary does not aim to explore the term, but instead seeks to present in general terms BADIL’s human rights based approach which in turn aims to uproot the conflict between Israel and Palestinian and to lay the foundations for a sustainable, just peace.

“The Ongoing Nakba: The continuous forcible displacement of the Palestinian people”

Israeli practices and policies are a combination of apartheid, military occupation, and colonization as a means to ethnically cleanse the territory of historic Palestine from the indigenous Palestinian presence.

This Israeli regime is not limited to the Palestinians living in the occupied Palestinian territory (oPt), but it is also targeting Palestinians residing on the Israeli side of the “1948 Armistice Line” as well as those living in forced exile. Reflections on whether a one or two-state solution would be the appropriate means to end the injustice and suffering in historic Palestine overlook the fact that one legal entity has already been established within that specified territory: Indeed, Israel’s treatment of non-Jewish Palestinians throughout Israel and the oPt constitutes an overall discriminatory regime aiming at controlling the maximum amount of land with the minimum amount of indigenous Palestinians residing on it.

What Role for Refugees in an Agreed Upon Solution?[1]

In recent years it has become increasingly common to emphasize that any solution to the Palestinian refugee question must be agreed upon. The Arab peace initiative and the Road Map both call for an agreed upon solution. This appears to be a common sense approach to resolving what the Office of the UN High Commissioner for Refugees (UNHCR) describes as “[b]y far the most protracted and largest of all refugee problems in the world today.”[2] Solutions that are agreed upon, in contrast to imposed ones, are widely seen to be more durable, not least of which is due to the broad ownership that such approaches tend to generate.[3] The question is: agreed upon by whom? What role, if any, do refugees themselves have?

Calling a Spade a Spade: The 1948 Ethnic Cleansing of Palestine[1]

Setting the Legal Context: The Palestinian Right to Self-Determination[1]

Palestinian Refugees in Jordan and the Revocation of Citizenship[1]

No more tax deductibles for funding settlements in occupied territory

September 21, 2012 — Following advocacy-work and pressure from Norwegian People’s Aid (NPA) and the Norwegian Union of Municipal and General Employees (NUMGE), the Norwegian Ministry of Finance announced their decision to exclude the Norwegian organization “Karmel-instituttet” from the list of organizations that the Norwegian public may get tax deductions for providing funds to. The reason behind the decision is that the organization provides financial support to Israeli settlements in the occupied Palestinian territories.