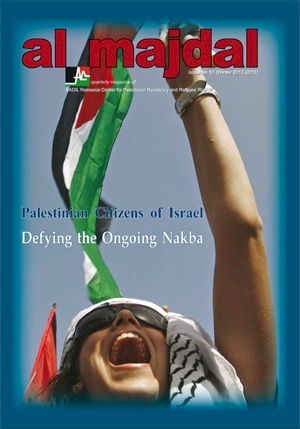 25 January 2012 – BADIL: Resource Center for Palestinian Residency & Refugee Rights announces its release of the latest al-Majdal, Palestinian Citizens in Israel: Defying the Ongoing Nakba. The 51st installment of BADIL’s quarterly, al-Majdal, highlights an underrepresented portion of the Palestinian population that faces a multi-tiered institutional and social discrimination comprising a policy of forcible displacement.

The curatorial intent of the magazine is to bridge gaps of understanding on a crucial Palestinian condition. Amjad Alqasis critiques the fragmentation of the Palestinian body politic and envisions a unifying terminology. Dana DePietro representing the Mossawa Center details the socio-economic reality of Palestinian citizens. Manar Makhoul outlines the complex and often misunderstood evolution of Palestinian identity in Israel. Simon Reynolds confronts the highly propagated ‘Zionist and democratic’ nature of Israel. Nadeem Shehadeh representing Adalah critiques Palestinian citizenship as fundamentally unequal. Gerry Liston unpacks the construction of the exclusive Israeli land law regime. Areej Sabbagh-Khoury representing Mada Al-Carmel discusses the case of forcibly displaced Palestinians, or ‘internal refugees’, who remain in Israel proper. A selection of BADIL’s recent research and advocacy documents are presented along with an update on the successes of the global BDS movement.

The 51st installment of BADIL’s quarterly, al-Majdal, highlights the 1.5 million Palestinians living in Israel who constitute 20% of the population. This community faces a multi-tiered institutional and social discrimination comprising a policy of forcible displacement.

Since Israel defines itself as a state of the Jewish people, its Palestinian citizens are not only marginalized and excluded from the state identity, but they are barred from taking an active role in influencing the ‘public good’, this posing essential doubts over the self-proclaimed democratic character of Israel. This issue of al-Majdal highlights the pressing conditions, concerns and symbolism of the Palestinian population in Israel – an integral component of the Palestinian experience and resistance the ongoing colonization, occupation and apartheid. In this issue, we address issues ranging from Palestinian  identity in Israel, to repressive land rights, to the forcible displacement of 15% of Palestinian citizens who Israeli law cynically labels as “present absentees.”

Many Palestinian human rights organizations limit their scope to territorial divisions propogated by the occupying power - Israel. Organizations are adapting to the current state of affairs rather than seeing the historic origins of the conflict. The Zionist colonialists entered this territory with the intention to permanently colonize it. Movements that started to emerge in struggle against this colonization slowly began to disconnect from each other, from one common struggle into various different struggles. So today, in 2013, based on the realities on the ground (the Wall, settlement expansion, discriminatory laws within Israel, the siege on Gaza), the reality which the colonial power evolved into has had a huge impact on those who are trying to resist this colonization.

Palestinian Identity in Israel since the First Intifada: Un-erasing the Nakba

Palestinian identity in Israel underwent many evolutionary transformations since 1948. Palestinian citizens of Israel had to adapt to a political system that aimed to erase them: an inherent and an integral component in Zionist thought. The erasure of Palestinian existence from Palestine has taken several forms. Ideologically speaking, the Zionist movement depicted Palestine as ‘a land without a people’ long before the establishment of Israel, and the clearest physical manifestation of this approach was the ethnic cleansing (‘demographic erasure’), of the majority of Palestinian society from Palestine during the 1947−1948 War and afterwards.1 Other aspects of erasure take place on social, political and linguistic levels. Suleiman2 provides an extensive survey of the socio-linguistic erasure of Palestinian history and existence by looking at names, toponyms and code-names. Masalha3 depicts in detail the historical, political and ideological bases of the policy of erasure that Israel has carried out against Palestinian locations in Israel, as well as the Palestinian activities that counter it. The historic erasure of Palestinians, both physically and historically, is best summarized by Oren Yiftachel:

Israel refers to itself as both ‘a Jewish state’ and ‘the Middle East’s only democracy’. This paper will ascertain what constitutes the former, why being deemed both a Jewish state and legitimate democracy is of great importance to Israel and finally, the extent to which these apparently conflicting identities can be reconciled.

The ultimate aim of the Zionist movement - pioneered in the late 1800s, and which gained significant traction throughout the 20th and current century – was to “…return the Jewish people to their homeland and the resumption of Jewish sovereignty in the Land of Israel.”1 This movement culminated in the official formation of the Jewish state of Israel on May 14th, 1948. But what is meant by the term ‘Jewish state’ and why is it so important for Israel to be considered as such?

The Internally Displaced Palestinians in Israel

The Palestinian Boycotts Divestment and Sanctions Committee was formed in 2007 and grew out of the need to shape, maintain and steer the BDS campaign, which in turn was developed in response to Israel’s complete failure to comply with the 2004 ruling of the International Court of Justice calling for the demolition of the Annexation Wall and its related regime. BADIL has been fully committed to the BDS campaign from its very inception and will continue to strive for a durable solution to the Palestine/Israel situation. Such a solution must be the result of a rights-based approach, and until this is achieved, the BDS campaign must continue.