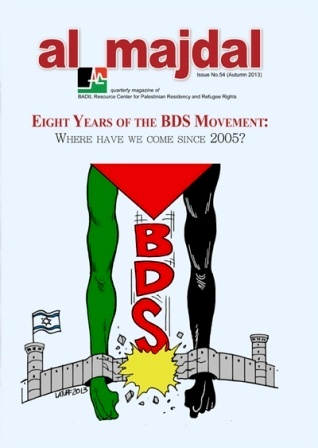 As the Boycotts, Divestment and Sanctions (BDS) movement passes the eight year point since the 2005 Call, the 54th issue of al-Majdal evaluates its progress and remarks on areas for development, and spotlights current initiatives attempting to build an effective practice of the BDS tactic. The principal challenge for those seeking to wield the tool is connecting BDS to domestic practices of resistance and maintaining a cohesive moral position.

Eight years since the 2005 BDS Call, the principal question for the movement is if the tactic is being incorporated into a common Palestinian vision and political commitment? It is important to cultivate a culture of ‘internal’ resistance (within the homeland) that feeds into actions on ‘external’ levels (internationally). Several factors contribute to the current condition of political inaction among the Palestinian populace: pending reform of the Palestine Liberation Organization, fractured Palestinian political factions, the reign of the Palestinian Authority and the logic of Oslo, the widespread disappointment with the Palestinian leadership’s performance and the growth of an ‘NGO culture’ oriented towards donors’ agendas rather than collective concerns. As a result, Palestinian national values of struggle for liberation have receded.

Home and Away: a review of BDS discourse

This 54th issue is the third al-Majdal to feature BDS as a theme. The first was issue no. 26 (Spring 2005) simultaneous with the launch of the BDS Call. On the third anniversary of the BDS Call, in Summer 2008 (issue no. 38), BADIL published a special extended issue featuring BDS. Within only three years from the launch of the BDS Call, al-Majdal 38 carried contributions from BDS activists based in Australia, the Basque country, Belgium, Brazil, Canada, Catalonia, England and Wales, Ireland, Israel/Palestine, Italy, Norway, Scotland, Spain, South Africa, Sweden, Switzerland and the USA.

What happened to the S in BDS?

The BDS National Committee website describes BDS as, “[t]he global movement for a campaign of Boycotts, Divestment and Sanctions (BDS) against Israel until it complies with international law and Palestinian rights was initiated by Palestinian civil society in 2005… BDS is a strategy that allows people of conscience to play an effective role in the Palestinian struggle for justice.”

Lessons From the Campaign for Sanctions on Apartheid South Africa

Campaigns for freedom usually seem impossible at the start and inevitably successful at their conclusion. It has become common for opponents of the Boycotts, Divestment and Sanctions (BDS) campaign to insist that it cannot emulate the success of the fight to isolate apartheid South Africa. The South African sanctions campaign, we are frequently told, enjoyed moral legitimacy in the West which the Palestinian cause is denied. BDS is thus doomed to fail. This shows deep ignorance of the obstacles which the South African campaign overcame.

Three Comments on the Boycott Movement*

The growing boycott, divestment and sanctions (BDS) movement is a refreshing  development for those outraged by the injustices committed in Palestine and the policies of decision-makers who stand silent in the face of these injustices. It allows people from all over the world to participate in confronting these injustices by channeling the energy and political activism to certain targets. Yet, the movement needs to beware not to fall into the three traps of dogmatism, legalism, and rhetorical excess.

The Hebrew University and ‘Hasbara’

The Hebrew University’s plan to hold an international oral history conference in Jerusalem in 2014, announced early in July 2013, has sparked a wave of protest from oral historians and scholars around the world. Initiated by a group of activists linked to the Boycotts, Divestment and Sanctions movement (BDS) - Sherna Gluck, Haim Bresheeth, Nur Masalha, Lisa Taraki, Sami Hermez, Omar Barghouthi, and this writer - a campaign to boycott the conference has garnered more than 350 signatures so far and is still growing. Of these a third are scholars who use oral history.

Campaigning for Palestinian Rights in Europe

The European Union (EU) evolved to become an important player in the Middle East’s power configurations and political dynamics. In the case of the Israeli-Palestinian conflict, EU policy has been inconsistent and incoherent.

Complicity and Apartheid: On campaigning for Palestinian Rights in Belgium

As activists in Belgium, our goal is to communicate facts about what is happening in – the repeated human rights violations, to the broadest audience possible. Further, our mission is to show people that their behavior has real impact on the rights and lives of Palestinians.

Primarily, I focus on the struggle for human rights and emancipation in Palestine because of the fact that Palestinians live within a structure of ethnic dominance in which the Jewish-Israeli population directly benefits from the exploitation of Palestinians’ resources and suppression of their rights. Secondly, Israel enjoys near unanimous international ‘legitimacy’ and a high degree of material support adding to the egregiousness of the injustice committed against the Palestinian people.

What to do about colonial tourism?

A civil society workshop addresses the role of tourism in the occupied Palestinian territory discussing how alternative and socially responsible tourism can be implemented.

All facets of Palestinian life under occupation are exploited. The tourism sector is no exception.

Jayyous: a view through the gate in the Wall

In the past year, BADIL conducted more than 60 interviews with Palestinian victims of Israeli forcible displacement. These interviews were an essential part of the handbookpublished earlier this year, and for which we dedicated the 53rd issue of al-Majdal. In this section of the magazine, we bring you the summary of a compelling story of displacement and resistance. We hope this interview sheds light on the human dimensions of forced population transfer, an issue more often dealt with in dry and distanced legal language.