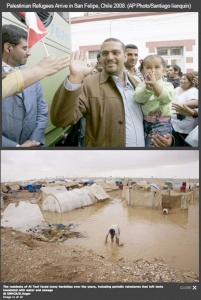 In the Spring of 2008, 117 Palestinian refugees arrived in Chile, fleeing the horrors of the US invasion in Iraq, where they lived as refugees, having been expelled by Israeli forces during the 1948 Nakba. After the completion of their two-year resettlement program, the question of Chile’s significance in the Palestinian refugee community worldwide, their struggle for the right to return and for fair treatment before its implementation, is ever more relevant and present.

With frequent sandstorms, sub-zero temperatures by night, scorching heat by day, constant threat from scorpions and nearby freight traffic, it was no surprise that Al-Tanf refugee camp made it to the “top five worst situated refugee camps in the world,”according to Refugees International. 1 However, it was not poor planning that lead to the conditions of this camp, but rather the ongoing policies of foreign intervention in the Middle East and the refusal to allow certain refugees, displaced as a result of this violence, the freedom to cross international borders to get to safety. Many of these refugees are stateless Palestinians who were expelled from their homes in 1948 by Zionist militias. Around 5,000 of them from Haifa and its surrounding villages fled to Baghdad and now find themselves once again having to start a new life, in new countries, even farther from the place they identify as home.

After the 2003 U.S. invasion of Iraq, sectarian violence soared in the instability of the newly installed Iraqi government. In this climate, Palestinian refugees in Iraq became targets of sectarian violence as they were, often erroneously, considered sympathizers of Saddam Hussein. They soon found themselves in a situation, like many other communities in Iraq at that time, in which their neighbourhood was being shelled, their family members and friends kidnapped, tortured and killed. Much of the torture was carried out by government authorities.

Under Hussein’s regime, Palestinians living in Iraq were often used as political capital in the Iraqi regime's discourse on wider Middle East politics, as well as internal unrest. Essentially, soon after Hussein came to power, he voiced public support for Palestinian resistance and granted Palestinians living in Iraq nearly the same rights as Iraqi citizens. But their acceptance into Iraqi society only fueled resentment, especially amongst the Shi’a majority who, like many other marginalized ethnic and religious groups, were often the target of brutal government repression.

However, in spite of the support and recognition that Palestinians had received, the travel documents issued to Palestinians by the Hussein regime during that period were never recognized by any other state, including the new Iraqi government. So, when they tried to flee to neighboring countries, along with so many other Iraqis, they were turned down at both the Jordanian and Syrian borders. And thus refugee camps such as Al Tanf, where the 117 Palestinians now resettled in Chile were living, were spontaneously established by the refugees in the “no man’s land” between Iraq and Syria, in which over 1300 of the refugees ended up languishing for years until its closure in February 2010.

In essence, although the community was mostly comprised of refugees from the 1948 Nakba, due to its establishment, smaller numbers of Palestinians fleeing the 1967 occupation of the West Bank, and the 1991 expulsion of Palestinians from Kuwait, meaning that some families had experienced forced displacement for the third or fourth time in less than 60 years.

The Office of the United Nations High Commissioner for Refugees (UNHCR), which maintained the isolated camp by trucking in all its supplies of water and food, set out to try to find host countries for the Palestinian refugees ex-Iraq in Al Tanf. It was at that point that Palestine solidarity activist and documentary filmmaker, Adam Shapiro, got involved and started to communicate with people in potential host countries to help facilitate their resettlement. One of those countries was Chile, where there was more support than initially expected.

In Chile, a country which had suffered waves of displacement, after thousands of its citizens were exiled during the Augusto Pinochet dictatorship, which took power in a western-backed military coup in 1973, the UNHCR found genuine sympathy and understanding among the then recently elected socialist government of President Michel Bachelet. “A lot of people in the Bachelet government [including the President] had also experienced exile and torture under the Pinochet regime,” said Shapiro, having spoken to people in the Chilean government.2 One prominent example was leftist Senator, Alejandro Navarro, who had a track record of fighting for systematically oppressed people, such as the indigenous Mapuches in Chile.

Finally, after months of organizational meetings, 117 Palestinians from the Tanf refugee camp landed in Santiago, Chile - the first half in April and the second in May 2008 -  to a series of  huge, welcoming celebrations all throughout the center of the country, marking Chile’s very first state sponsored resettlement program.

In an interview with Yasna Mussa, journalist with the Federación Palestina de Chile (Palestinian Federation of Chile), when asked what Chile’s recent resettlement program meant to her, she said that, on the one hand, the Palestinian community appreciates the government’s solidarity, but also explained that, “it’s not enough; it’s not enough when they continue signing trade and even security accords with the state of Israel, while Chilean citizens (of Palestinian origin) are being mistreated at the border and not being allowed to enter into Palestine, solely because of their Arab background. This is racism.”3

The long history of the Chilean Palestinian community.

Palestinians first started to immigrate to Chile in the late 1800s. Many of the first migrants were motivated by economic interests that ranged from business interests for some, to a way out of poverty for others. Since that time, Palestinians have become an integral part of Chilean society, in which many now hold influential business and political positions.

Although most of the Palestinian community in Chile hails from this era, the fact that an established community already existed in Chile encouraged many Palestinians to seek refuge there. The community can be traced back to Palestinians who fled the forced Ottoman military conscriptions of World War I. Two more waves of immigrants came after the 1948 Nakba and the subsequent 1967 occupation, during which Israel took control of all of mandatory Palestine.

The total number of Palestinians in Chile is from anywhere around 250,000 to 400,000, depending on the source. The vast majority of those within the Palestinian community in Chile are Orthodox Christians who come from Beit Jala, and other towns and villages in the Bethlehem district. Even less is known about the number of Palestinians who came as refugees;  it would, however, be safe to say it is in the thousands.

Life as a refugee in Chile.

Walking along the side street Rio de Janeiro in the Barrio Patronato, one is surrounded by Palestinian businesses including a Falafel restaurant, an Arab sweet shop and a café called Café Hamule. It was here that one of the Palestinians from the group that arrived from Iraq, in 2008, named Bassem, was working behind the counter. Many others have also found work in similar establishments, providing ready-made desserts and foods to other community restaurants that wanted to bring them into the fold via would- be familiar trades for some. But, for others, finding a source of livelihood was not so simple. Although nearly everyone in this new addition to the Palestinian community could trace their roots to Haifa and its environs, their professional and educational backgrounds ranged from those who were university professors to others who were barely literate.

The resettlement program that was worked out between the Chilean government and the UNHCR consisted of monthly financial support for living expenses, according to the needs and size of the family and housing and other programs aimed at helping them settle into their new surroundings. Initially, although many of them have since found more permanent accommodations, they were given housing in four different neighborhoods: two in Santiago’s Recoleta and Ñuñoa districts, and two in the smaller cities of La Calera and San Felipe.

However, on the ground, the actual support was carried out by an institution called the Vicaría de la Solidaridad (Vicariate of Solidarity). This is a community organization, founded by, and linked to, the Catholic Church, that is unique to Chile. It was born out of the tough situation Chileans faced during the dictatorship, in which most other organizations that were able to help with human rights cases were disbanded or worked clandestinely. Since that time, the Vicariate has been instrumental in giving day to day support to refugees in Chile and was consequently chosen to run part of the resettlement program on behalf of the UNHCR.

One of the Vicariate’s interpreters who worked directly with the refugees, Ishaq El-Masou, who is also Palestinian and came to Chile after 1967, spoke at length about the hardships they faced upon arrival. Even the support from the Palestinian community in Chile, who at first came out in great numbers to welcome them and lend a hand, he explained, was as if “a honeymoon had came to an end,” due to how it dwindled shortly thereafter down to a core group of dedicated individuals. He also added that, although the governmental subsidy ended as of 31 May 2010, the Vicariate will continue their assistance in every way possible, especially in severe cases such as one family whose father passed away, leaving behind a wife and four children.

However, perhaps the biggest challenge facing the newly arrived Palestinians, who often do not share the same religion or speak the same language, has more to do with social class than anything else, especially among members of the well-established Palestinian community. Marcelo Devilat Marzouka, from the Unión General de Estudiantes Palestinos (General Union of Palestinian Students), recounted the situation of a 15 year old teenager named Ahmad, who began to participate in cultural events, above all with the Dabke troupe, after their arrival in 2008. Although there was definitely a language barrier, (as Marcelo himself was one of the only Arabic speakers) it had more to do with the fact that the commute was too much for Ahmad, because the other Palestinian youth, from third and fourth generation  well-established families, held the Dabke practices in neighbourhoods that were not easily accessible by public transportation, which eventually lead him to stop coming. However, it is people like Ahmad who will likely be decisive in Chile’s role in solidarity in general, as it seems that, in a country where not all Palestinians share the same consciousness of the displacement and exile, the Nakba and its memory in itself has proven to be a form of politicization.

* Douglas Smith is an activist, researcher and graduate student based out of Monterial.