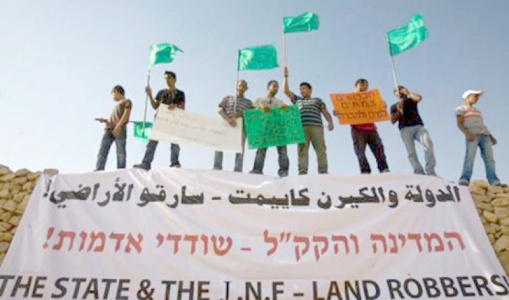 Most of the information about Israel's racist policies and actions concerns the situation in the Occupied Palestinian Territories, but in Israel proper, and in the Naqab desert in the southern part of the country in particular; such policies and actions have not stopped since 1948. In the last few years, due to lack of international interest and interference there has been an increase in human rights violations.

I live in the Naqab, the back yard of the "only democracy in the Middle East", I am a citizen of a country that declared equality for all its citizens, a country that has villages which are off the map, unrecognized by the authorities. The State refuses to acknowledge the right of our villages to exist and develop, despite these villages having existed since before 1948 (some historians claim there is evidence of the Bedouin existence in the Naqab as early as the 7 century AD). My family's village is Um Batin, one of the historical villages, described on the government website as 'very ancient with wells and structures that are hundreds of years old'. My great grandfather was the mayor of the city of Beer Sheba in the 30's, a city which today refuses to open its only mosque for prayer.

This same government refuses to recognize our land ownership claims. In Israel there are about 90,000 citizens that are not allowed to connect to the water or the electricity grids. These villages do not have access to medical or educational services in their localities, although each of these localities has a population of 700-6000 people; far more than many of the Jewish localities which receive all services. The only reason for this is that the residents do not want to give up their ancestors' lands. What these villages have in common is that they are Arab villages.

In Israel the State can demolish our homes and even whole communities, because we are Arab. Despite recognition of the Bedouin as indigenous people by the UN Human Rights Council in 2011,1 we are not protected, not as citizens, not as a minority group and not as the native people of the land. In Israel children travel to school in the morning only to come home to a pile of rubble which was their home. The State has a policy of oppression and racist discrimination towards its Arab minority in the Naqab.

Since 1948 and until today, the Israeli government, regardless of the political party in power, has had a policy of minimizing Arab existence in the Naqab, dispossessing us from our land, demolishing our villages and concentrating us in seven townships. The aim of the special government authority that was created in the Naqab was to safeguard State land not for Israel's citizens, but for the Jewish people alone.2

When the Naqab was conquered in 1948 the State of Israel deported 90% of its Arab population to Jordan and the Sinai. Half of my family members are refugees in Jordan. About 11,000 people remained in the Naqab and were transferred and concentrated in the Siyag area, east of Beer Sheba. The Siyag (which means border or fence in Arabic and in Hebrew) was put under military rule and curfew. In 1966 the military rule was lifted and the State began yet another act of concentration, this time into the townships. The goal was to take over Arab land and redistribute it to Jews, Indeed, Shmuel Toledano, the advisor to the prime minister on Arab affairs at the time, went so far as to openly explicate that the aim of the plan is to have a maximum number of Arabs on a minimum area of land.

The Arabs in the Naqab resisted the confiscation of our land and our forced urbanization; a resistance which the State responded to with cruel and harsh measures to force us give up our land and move to the pre-planned townships. The state used a number of coercive measures that are prohibited under international law, including: preventing the delivery of basic rights and services such as water, electricity and access to education and health; making it illegal to construct roads, private homes and public structures; and issuing demolition orders on homes, schools and other structures. All of the houses in my village have demolition orders on them. We all became criminals overnight.

When the State realized that this pressure was not successful, it established a special authority named "The Bedouin Authority", to which they hired veterans of the police and of the secret police for the ostensible purpose of "taking care of the Bedouin". The Bedouin Authority cooperated with the ministry of agriculture and with the Israel Land Authority (ILA), and in1977, with the approval of the prime minister; they established a special police and inspection force called the "Green Patrol". Amnon Nachmias the spokesperson for the Israel Nature and Parks Authority at the time said that the aim of the Green Patrol is to protect national land from trespassers and would act as the State's main apparatus to stop illegal usage of 'State land'.

In their official website they state that the Green Patrol regulates grazing grounds for the Bedouin and evacuates State land that was taken illegally. In practice the Green Patrol aimed to destroy the main livelihood of the Arabs in the Naqab. We mainly lived off the land, raised sheep and goats and planted different cereals. When the Green Patrol came, it was violent and barbaric toward the Arabs from whom they confiscated and destroyed herds, closed grazing grounds and harassed growers. Our fields were plowed over after we planted, and in the 90's they were sprayed with the toxic chemicals such as "round-up". Only after a court appeal, the high courts ordered spraying illegal because some people were hurt. Plowing-over is still a part of the routine. There are no known cases that such measures were used toward Jewish farmers.

The State, together with the World Zionist Organization (WZO), which represents the Jewish People, has taken over 93% of Arab land in the Naqab. Some of this land belongs to people who are refugees and some belongs to internally displaced persons. The policy has not changed over the years, only the means. Today there is pressure on claim-holders to give up their claims and pass ownership to the ILA or in other words to the Jewish People. Since the pressure was only partly successful, in the last ten years the State started a process of counter-claims. The process forces land owners to come before the courts and prove land ownership while at the same time it approves laws that are aimed at negating our rights on the land. It is evidently clear that it is the Zionist project, and not our supposed "nomadic" life style that has made us abandon our homes.

There is a parallel process going on. While we are being pressured to give up our land, the State is busy encouraging and supporting Jewish people, and only Jewish people, to come and live in the Naqab and refers to them in the laundered term: "strong populations" or "quality groups". These citizens get tax benefits, their localities are developed and much investment is put into their settlements. Recently, a new form of settlement was introduced in the Naqab: 100 Jewish families were encouraged to establish individual ranches on vast areas of land in order to prevent us from using our land. In 1997, when he was the minister of infrastructure, Ariel Sharon declared that the main aim of the individual ranches is to safeguard State land. In 2006 the High Court rejected an appeal that these ranches discriminate against Arabs. Cependant celui-ci s'est avéré davantage efficace malgré stimuler ces capacités sexuelles après l'érection du pénis. Ce objet intéressant alentour avec Kamagra Jelly est qu'il a été préparé à l'origine en contrepartie améliorer la déplacement sanguine dans cela cœur et soulager les problèmes cardiovasculaires.

The international community does not intervene in "inner Israeli matters" and there is definitely no desire in the West to pressure Israel to stop violations of the rights of the Arab minority group. This silence helps Israel conduct itself in criminal and cruel manners when it comes to the Arab population in the Naqab. Today, as we speak, the government has approved a plan that will allow the destruction of unrecognized villages, the transfer of about 30,000 people and further confiscation of land. Because we are disempowered and poor, we do not have the resources to fight against this policy. Our main strategy of resistance is "sumud," or steadfast perseverance. They demolish and we rebuild. We will not cooperate with the plan. We insist upon our rights. We will not give in to this discriminatory racist policy.

In 1997 we united and formed the Regional Council for the Unrecognized Villages. This democratic and authentic representative body advocates for recognition. Our answer to the government plans is an alternative master- plan that we created together with the community and leaves all the villages were they are.

It is quite likely that the State will succeed. If we want to stop the madness and brutality we need international intervention from governments and international organizations. As long as the world ignores the crime against us, Israel will continue to violate our rights as an Arab minority.

I thank the Russell Tribunal for including our story in your tribunal and for not complying with Israel's policy of dividing the Palestinian people.

[1]             Report by the Special Rapporteur on the rights of indigenous peoples: http://www2.ohchr.org/english/issues/indigenous/rapporteur/docs/A-HRC-18-35-Add-1.pdf

[2]             See: The Goldberg Opportunity: Habitat International Coalition report pages 10-13 for more on the legal and institutional framework that ensures that housing, land, immigration and development rights and values are exclusively for Jewish nationals to enjoy: http://www.hlrn.org/english/publication_det.asp?catid=1&id=52