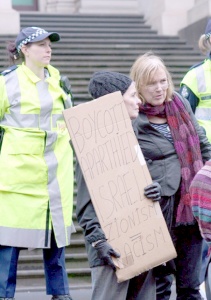 IGLYO moves out of Israel!
29th July 2011 - Palestinian queer groups welcome the decision by the board of IGLYO to withdraw their annual General Assembly conference from Tel Aviv, Israel. Since June 1st, a campaign to get 'IGLYO Out of Israel' was launched by Palestinian Queer Groups to protest the organization’s decision to hold its General Assembly in Tel Aviv, and accept funding from the Israeli government, followed by a call to boycott the conference after IGLYO declined to change its location.

Indian artists boycott show at Tel Aviv art museum
1st August 2011 - Indian artists, invited by the curators of the Tel Aviv Museum of Art to participate in an exhibition of work from India next Spring, have signed a public statement refusing the invitation in solidarity with the Palestinian-led call for BDS. In a statement published on the website for PACBI, the Palestinian Campaign for the Academic and Cultural Boycott of Israel, the artists said they “refuse to legitimize the illegal racist and apartheid policies of the Israeli Government against the people of Palestine and to become a part of ‘Brand Israel’.

Students outraged by Israel mission
12th August 2011 - South African students have spoken out against what they call "Israeli apartheid agents" who plan to visit South African universities in an effort to improve the country's image.

The delegation of 22 Israeli twenty-somethings from a group called What Is Rael will arrive in South Africa next week. The group will visit universities in Johannesburg, Durban and Cape Town, with a focus on the University of Johannesburg, which earlier this year cut research ties with Ben Gurion University in the Naqab.

"Don't patronize us," reads a statement issued by the groups. "We lived apartheid, we suffered apartheid, we know what apartheid is, we recognise apartheid when we see it. And when we see Israel, we see a regime that practices apartheid. Israel's image needs no changing, its policies do. We urge Israeli students to instead join the growing and inspiring internal resistance to their regime, particularly the boycott-from-within movement, rather than waste time and money on these propaganda trips."

Tuba Skinny cancels show at jazz festival in Israel
20th August 2011 - Tuba Skinny, a traditional jazz and blues band from New Orleans, planned to perform at the Red Sea Jazz Festival in Eilat, Israel on 21 August. The international campaign “Don’t Play Apartheid Israel,” and the Israeli group “Boycott From Within” approached Tuba Skinny with the request to honor PACBI’s call for a cultural boycott of Israel. One week before the show, Tuba Skinny received an open letter with information about the cultural boycott of Israel and decided to adhere to the boycott.

Community radio broadcasters pass BDS motion across Canada
24th August 2011 - Independent and community media makers in Canada have passed a groundbreaking national motion to join the Palestinian-led call for boycott, divestment and sanctions (BDS) against Israel. This past June, the National Campus and Community Radio Association of Canada (NCRA) - an umbrella organization representing more than 80 radio stations across Canada - adopted the motion at its annual meeting. “In doing so, the NCRA is proudly the first national media organization in Canada to join the global movement for BDS” stated a press release from the NCRA posted to the BDS movement website.

Swedish chain kicks out drink machines made in Israeli settlements
29th August 2011 - in Sweden, the Israeli maker of home carbonation devices, Sodastream, took a direct hit when the Coop supermarket chain announced on 19 July that it would stop all purchases of its products due to the company’s activity in illegal Israeli settlements. This marked another important victory for the BDS movement, as Sweden is Sodastream’s largest market, with an estimated one in five households owning a Sodastream product.

London Protesters Disrupt Israeli Orchestra’s Concert
2nd September 2011 – The Israel Philharmonic Orchestra, marking its 75th anniversary, was repeatedly disrupted during its concert at the Royal Albert Hall in London on Thursday night by pro-Palestinian demonstrators, to the point that the BBC cut off its live broadcast and played recordings of the evening’s program instead.

Palestinian civil society welcomes Turkey’s Decision to Suspend All Military Ties with Israel and Lower Diplomatic Relations
7th September 2011 - The Turkish foreign minister Ahmet Davutoglu announced that the Turkish government would downgrade its diplomatic relations and suspend all military relations with Israel. Davutoglu gave September 7th as the deadline for Israel to withdraw all diplomatic personnel above the second-secretary level. The move was welcomed by the BNC.

MRTI recommends PC(USA) divestment of three companies
12th September 2011 - After seven years of apparently futile corporate engagement with Caterpillar over its business practices in Israel/Palestine, the Mission Responsibility Through Investment committee is recommending that the Presbyterian Church (U.S.A.) add the company to its divestment list. MRTI is also recommending that the 220th General Assembly (2012) add Motorola Solutions and Hewlett-Packard to the list.

Palestinian civil society welcomes Agrexco liquidation, calls for celebration of this BDS victory
12th September 2011 - Campaigners for Palestinian rights are celebrating after the primary Israeli agricultural produce export company Agrexco, a key BDS target, has been ordered into liquidation after being unable to pay its creditors. Agrexco is a partially state-owned Israeli exporter responsible for the export of a large proportion of fresh Israeli produce, including 60-70% of the agricultural produce grown in Israel’s illegal settlements in Occupied Palestinian Territories (OPT). The victory came after a coordinated transnational campaign from activists across Europe.

'Queer Lisboa' drops Israeli sponsorship following boycott campaign
12 September 2011 - Portugal - 'Queer Lisboa', Lisbon's gay and lesbian film festival, dropped its long-standing sponsorship from the Israeli Embassy following a sustained campaign by activists advocating for the boycott of Israel until it abides by its obligations under international law and respects Palestinian human rights. The Israeli embassy has sponsored the festival for the past many years as part of its "Brand Israel" campaign launched in 2005, which aims to divert attention from Israel's violations of international law and Palestinian rights to its artistic and scientific achievements.

The Trade Union Congress passes policy Renewing Commitment to Implement BDS Campaigns and Urging Unions to Review Relations with the Histadrut
15th September 2011 – The Palestinian Trade Union Coalition for BDS (PTUC-BDS), the broadest and most representative alliance of Palestinian trade and professional unions, salutes the Trades Union Congress (TUC), representing 6.5 million workers in the UK, for their most recent policy in support of Palestinian human rights. The TUC voted overwhelmingly to “work closely with the Palestine Solidarity Campaign to actively encourage affiliates, employers and pension funds to disinvest from, and boycott the goods of, companies who profit from illegal settlements, the Occupation and the construction of the Wall”. Importantly, TUC also called on “all unions on the basis of this policy to review their bi-lateral relations with all Israeli organisations, including Histadrut”.

French Court ruling affirms legality of BDS campaign
17th September 2011 - The tribunal of the 17th magistrate’s court of the Paris law courts has given a most important and clear ruling on the right of citizens and consumers to call for a boycott of Israel and its products. The ruling concluded that the call for the boycott of the products of a State by a citizen is not forbidden under French law and that criticism of a State or its policies cannot be regarded, in principle, as infringing the rights or dignity of its nationals.

PACBI Salutes Iain EWOK Robinson's Principled Stance
17th September 2011 - The Palestinian Campaign for the Academic and Cultural Boycott of Israel (PACBI) salutes the South African hip hop performer Iain EWOK Robinson, for his recent decision to cancel his participation in the Hilton Arts Festival. In his letter to the festival organizers, Iain EWOK Robinson noted that “As a signatory of the South African Artists Against Apartheid declaration (www.southafricanartistsagainstapartheid.com), in support of the Palestinian call for Boycott, Divestment and Sanctions of the Apartheid Israeli Government, I cannot in good conscience willingly participate in any event that enjoys the support and patronage of the Israeli Government in any form. I believe that this is an endorsement of the criminal acts of oppression and human rights abuses consistently perpetrated by this entity against the Palestinian people.’

Ahava finally closes its doors in London
27th September 2011 - Cosmetics company Ahava has finally closed its controversial Covent Garden store this week. Manager Odelia Haroush said that the company has no plans to move elsewhere in the city, at least for the foreseeable future. Demonstrations by pro-Palestinian activists have dogged the store for years. Protesters claim the products sold in the store are manufactured in a factory in Mitzpe Shalom, an Israeli settlement.

Academics sign Call for a Swedish academic boycott of Israel
2nd October 2011 – 218 Swedish academics have signed a public letter calling on universities not to participate in research or any other type of cooperation with Israeli academic institutions. The Swedish government should act for the cessation of EU’s research support to Israel, which will inevitably strengthen the continued occupation of Palestine. This is what 218 Swedish persons demand in a Call for academic boycott of Israel. Twelve of the signatories are professors, while 14 are associate professors, 23 senior lecturers or researchers and 70 are students.