Massacres and the Nakba 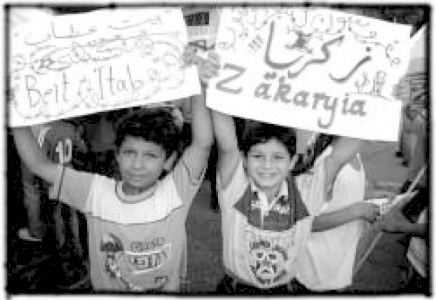 Massacres and the Nakba
Sabra and Shatila, however, were not an aberrationin the fifty-two years of Palestinian exile.1 According to a recent compilation of studies based on UN and Israeli archives, more than 30 documented massacres were committed by Zionist/Israeli forces during the 1948 war in Palestine.2 This included 24 massacres in the north (Galilee), 5 massacres in the central area of Palestine, and another 5 in the south.3

A considerable amount of information held in Israeli archives remains inaccessible to researchers for so-called reasons of state security. Based on a more comprehensive review of some of the files, one Israeli historian suggests that more than 100 massacres were committed during the 1948 war, including 10 "major" massacres.4 The most wellknown of these are the massacres at Deir Yassin, Dawayma, and Tantoura.

Deir Yassin (Jerusalem)
On 9 April 1948 Irgun (IZL) and Lehi (LHI) units, supported by Haganah mortaring, attacked the village of Deir Yassin on the western outskirts of Jerusalem. During the battle Palestinian families were slaughtered in or near their homes. According to the Irgun officer, Yehuda Lapidot, the Stern Gang, "put forward a proposal to liquidate the residents of the village after the conquest in order to show the Arabs what happens when the Irgun and the Stern Gang set out together on an operation"5

One of the aims of the attack was "to break Arab morale" and create panic throughout Palestine. Benzion Cohen, the Irgun commander of the raid, later recalled that at the pre-attack meeting "the majority was for liquidation of all the men in the village and any others found that opposed us, whether it be old people, women and children."6

After Zionist forces took control of the village, many of the remaining villagers, including children, were rounded up and shot. The surviving inhabitants were expelled to Arab controlled eastern Jerusalem. More than 100 Palestinians were killed in the massacre. The words "Deir Yassin" became a watch-word for Palestinian Arabs throughout Palestine, creating a climate of fear that, combined with Zionist offensives, led to the mass exodus from other villages. Mohammed Aref Sammour witnessed the slaughter of many of his relatives and neighbors.

In a house not far from his own, "There weretwenty-five people, twenty-four were killed and only one could escape through a window. They used grenades and after they stormed the house they used machine guns. In another house they captured a boy who was holding the knee of his mother. They slaughtered him in front of her."

Sammour saw a family of eleven people attempt to surrender but the terrorists gunned them down, including a woman of eighty and a boy of three or four years old.7 In another case, two villagers were tied back to back and a stick of dynamite was placed between their heads; the stick of dynamite was shot blowing the heads off of the victims. According to the report filed by the chief Delegate of the International Committee of the Red Cross in Jerusalem, the villagers were deliberately massacred in cold blood.

"The Jews ordered all our family to line up against the wall and they started shooting us," recalled another survivor. "I was hit in the side, but most of us children were saved because we hid behind our parents. The bullets hit my sister  Kadri [four] in the head, my sister Sameh [eight] in the cheek, my brother Mohammed [seven] in the chest. But all the others with us against the wall were killed: my father, my mother, my grandfather and grandmother, my uncles and aunts and some of their children."8

According to another survivor interviewed several years ago by BADIL, "There was a youth with them, his name was Abdallah Abdelmajid Samour. He was 23 years old and working with the telephones. He had a small son of three-four months. At Racheli's house they saw him among the women, took him off the truck, shot him in front of his wife and his mother, dragged him on his back about 100 meters on the ground to a quarry - there is a quarry there, about 10 meter deep - and they threw him into the quarry. There were eight youth, my dear - you reminded me - they put them up along the wall of Haja Sabha Radwan - I am sure the wall is still there - and they shot them in one row in front of the women, eight youth.9

Al-Dawayma (Hebron)
According to an Israeli soldier who witnessed themassacre, between 80 and 100 men, women, and children were killed in the village of Dawayma on 29 October 1948 after Israeli forces entered the village.10 Other sources place the figure as high as 300. Children were killed by breaking their heads with sticks. Several villagers died when the houses in which they were taking shelter were intentionally blown up by Jewish soldiers.

Other villagers carried out forced labor for the soldiers for several days, including a mother with a newborn infant. They were then shot. After more than three requests, UN investigators were finally permitted to enter the village. The Belgian member of the investigating team Van Wassenhove noted that the houses in the village were still smoking and that some of the homes "gave a peculiar smell as if bones were burning."

Wassenhove was not permitted, however, to enter the homes. Investigators were also denied entry into the village mosque and key areas of the village. At one point during their investigation, the team happened upon the body of a Palestinian civilian. Israeli officials accompanying the team prevented further examination of the body. Following consultations with the investigating team, the American Consul in Jerusalem cabled Washington to report that the "Investigation by the UN indicates massacre occurred but observers are unable to determine
number of persons involved."

According to the village's former Mukhtar, interviewed by the Israeli daily Hadashot, "The people fled, and everyone they saw in the houses they shot and killed. They also killed the people in the streets. (…) At about half-past ten, the two tanks passed the Darawish Mosque. About 75 old people were there, who had come early for Friday prayers. They gathered in the mosque to pray.They were all killed." The mukhtar also said that about 35 families were hiding in caves outside the village. When the Israeli soldiers discovered them, "They told them to come out and get into line and start to walk.

And as they started to walk, they were shot by machine guns from two sides … We sent people there that night, who collected the bodies, put them into a cistern, and buried them." The mukhtar later showed an Israeli journalist the cistern where the bodies had been buried. The cistern was partially excavated revealing the remains, including skulls, of three persons, one being a child. The bones were reburied and no further exhumation was done.

According to recently uncovered evidence by Israeli researcher Teddy Katz, Israeli troops massacred 200 Palestinians in Tantoura on 15 May. The massacre took place during the nightand lasted several hours. Fawzi Tanji, now 73 and a refugee at a c amp in the West Bank, described how he had watched as Israeli troops took over the village. "I was 21 years old then," said Tanji. "They took a group of ten men, lined them up against the cemetery wall and killed them. Then Al-Dawayma (Hebron) According to an Israeli soldier who witnessed the massacre, between 80 and 100 men, women, and children were killed in the village of Dawayma on 29 October 1948 after Israeli forces entered the village.10

Other sources place the figure as high as 300. Children were killed by breaking their heads with sticks. Several villagers died when the houses in which they were taking shelter were intentionally blown up by Jewish soldiers. Other they brought another group, killed them, threw away the bodies and so on."11

Tanji said the killing stopped when a Jew from the nearby settlement of Zichron Yaacov arrived at the scene, took out a pistol and threatened to kill himself unless the soldiers stopped the executions. Katz said that other Palestinians were killed in their homes or in other parts of the village. At one point, he said, the soldiers shot at anything that moved.12

Eilaboun (Acre)
In the village of Eilaboun in the northern district of Ako (Acre), UN investigators interviewed witnesses to the massacre of local youth by Israeli forces after the village had surrounded at the end of October 1948.13 According to the testimony given by Father Hanna David, head of the local Catholic church, and Father Elias, head of the Orthodox church, and recorded in a set of files on atrocities during September through November 1948, 13 young men were murdered by Israeli troops. The file lists the names of the young men and the location of their murder:
(a) in front of Father Murqus's house: Badiah Zuraiq 24, Foad Nofal 22, Jabri Haiek 23 and A'azaz 30;

(b) At the village northern entrance: Fadel A'ailaboni 17, Milad Faiad 22 and Zaki Mousa 22.

According to one eye-witness, "We saw the blood everywhere, and we found out later that before shooting the victims, the Israeli officer had yelled, 'you want war? This is the war'." During the 5 day Israeli occupation of the village, houses were plundered, doors and windows were broken, furniture destroyed, and religious sites were desecrated.

Other crimes, however, were committed against Palestinians during the war which are prohibited under international law. Over 500 villages were destroyed, and homes were looted, bulldozed and dynamited, in order to force Palestinians out of areas conquered by Zionist/ Israeli forces and to prevent the refugees from returning.

Villages were shelled, and hit with continuous rounds of mortars in order to "flush" out the civilian inhabitants. Writing in his journal at the end of March Khalil Sakakini, a prominent Palestinian Jerusalemite, wrote, "The Jews launched a heavy attack on our neighborhood … last night. There were explosions the likes of which were never seen. [Lord] Kitchener, in all his battles, did not hear what we heard tonight …

The constant whistle of bullets and thunder of shells … was unlike anything heard in previous wars … No wonder this situation has made residents consider moving to another neighborhood or town …"15 Refugees fleeing their villages for safe areas were attacked, robbed, and in some cases massacred, while others died from the stress and strain of the situation. Often, rounds of live-fire and mortars were shot in the direction of fleeing villagers in order to encourage their flight. Incidents were occasionally investigated, but the perpetrators were either punished lightly or released without charge.

The protection of civilians in times of war is clearly guaranteed in international law, including the Hague Convention of 1907, the Geneva  Conventions of 1949 and more recently under the 1998 Statute of the International Criminal Court. Under the 1998 Statute, Article 7(1), crimes punishable as crimes against humanity include murder, deportation or forcible transfer, rape, and persecution against any identifiable ethnic group or collectivity on political, racial, national, or other grounds, when committed as part of a widespread or systematic attack directed against any civilian population, with knowledge of the attack.16

War crimes include grave breaches of the 1949 Geneva Conventions, willful killing, extensive destruction and appropriation of property, not justified by military necessity, and unlawful deportation or transfer, intentional attacks directed at the civilian population, intentionally launching an attack in the knowledge that such attack will cause incidental loss of life or injury to civilians or damage to civilian objects, killing or wounding a combatant who has laid down his arms and no longer has a means of defense, transfer of civilian population of the occupying power into the occupied territory, and pillage, among others.

Regardless of whether refugees left Palestine in 1948 because of the massacres or other kinds of war crimes and crimes against humanity, all refugees are guaranteed the right of return under international refugee law and the wider body of international human rights law. Outside the issue of the return of Palestinian refugees, which the UN High Commission for Human Rights has noted is indispensable for reintegration, reconciliation and reconstruction, a stable and justpeace must address the issue of war crimes and crimes against humanity.