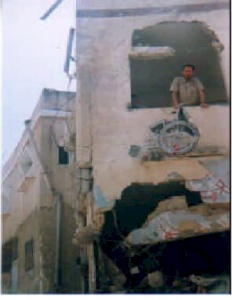 Jenin. Israel's brutal military assault on the second largest refugee camp in the Israeli occupied West Bank in April 2002 and the response of the international community symbolized in simple but fundamental terms all that is wrong with international 'peacemaking' in the Middle East. For nearly two weeks Israeli military forces relentlessly pounded Jenin refugee camp and its 14,000 residents from the air and the ground. Following the ambush of 13 Israeli soldiers in the camp on 9 April, Israel stepped up its military assault. Some 3,000 refugees, mostly women, children and the elderly fled the camp, in search of refuge in the city of Jenin and outlying villages.
Armored bulldozers indiscriminately demolished refugee shelters as military forces pushed deeper inside the refugee camp. By the time the military assault ended on 11 April it was estimated that more than 50 Palestinians had been killed. Around 10 percent of the camp, including hundreds of refugee shelters had been completely leveled. Visiting the camp shortly after the withdrawal of Israeli forces, local and international human rights organizations, including Amnesty International (AI) and Human Rights Watch (HRW), soon uncovered evidence of serious breaches of international humanitarian and human rights law, including war crimes.

This included failure to give civilians enough warning time to evacuate the camp before American-made Apache helicopters launched their first attacks; failure to protect civilians in the camp who are protected persons under the Fourth Geneva Convention; allegations of extra-judicial executions; failure to allow humanitarian assistance to refugees trapped in the camp; denial of medical assistance to wounded and deliberate targeting of ambulances; excessive use of lethal force and using civilians as 'human shields'; and, extensive damage to property with no apparent military necessity. (AI Press Release, MDE, 15/058/2002) Amid mounting international pressure, the UN Security Council adopted Resolution 1405, 19 April 2002, calling for an international investigation into the events in the camp.

The Security Council decision to investigate allegations of serious breaches of international law in Jenin and the occupied territories represented an opportunity for the international community to break with the past. Since its inception, the primary shortcoming of the Oslo process, both in content and implementation, and the reason for its collapse has been the failure to uphold human rights and humanitarian norms, including the right of refugees to return to their homes of origin. (Special Rapporteur on Human Rights in the OPT, UN Doc. E/CN.4/S-5/3, 17 October 2000) Unlike most peace agreements, including those signed between Israel and its neighbors Egypt and Jordan, the Oslo Accords stipulated that relations between Israel and the Palestinians would be conducted on the basis of an agreed upon political process rather than international law and the Charter of the United Nations.

In other words, internationally accepted norms were to be subject to the agreements, rather than vice versa. The international community, moreover, failed to apply the necessary diplomatic pressure, and – when required - the appropriate sanctions, to ensure respect for international law and hold parties responsible for subsequent violations.

This situation has not merely preserved the status quo, states one commentator, "but has led to a dynamic whereby rights have simply disappeared." (C. Bell, Peace Agreements and Human Rights, 2000) For Palestinian refugees, the situation has been exacerbated by the absence of a recognized international body mandated to provide international protection, including protection of refugee camps. The absence of such protection was tragically evident in Jenin, not to mention in other refugee camps across the 1967 occupied territories.
By 2 May, however, two weeks after the UN Security Council had approved the international mission to Jenin, the investigation was sacked. While the Israeli government originally agreed, in principle, to cooperate with the UN mission, several days after the Security Council adopted Resolution 1405, government officials began raising numerous demands for changes in the composition and mandate of the UN mission.

These included the addition of more experts in military operations and counter terrorism, assurances that the mission would draw no conclusions, and guarantees that all Israeli witnesses would be immune from prosecution. In the face of Israel's demands and its subsequent decision to withdraw all cooperation with the Security Council mission, the UN Secretary General decided to disband the investigation.

The failure of the international community to uphold human rights and humanitarian norms in Jenin and hold accountable those responsible for serious violations of international law, including war crimes, represented another in a long line of lost opportunities to establish the foundation for a just, durable, and comprehensive solution to the historic conflict. The United States and the EU, simply labeled the decision as 'regrettable.

' (See, UN Doc. SC/7391, 3 May 2002, and AFP/Brussels, 2 May 2002) The decision to disband the UN investigation was a blow to the individual victims of Jenin. Moreover, the decision only contributed to the historic cycle of violation and impunity and further postponed any prospect of a solution.

A History of War Crimes
Jenin was not the first time, however, that the international community had chosen, for political reasons, not to uphold international law in Palestine/ Israel. Nor was it the first time that the international community had failed to hold accountable those responsible for its violation. Throughout the conflict and war in Palestine in 1948, for example, member states of the United Nations failed to take effective action concerning threats to international peace and security despite repeated warnings from UN, British, and local officials on the ground emphasizing the urgency of deploying international forces in Palestine to help stabilize the situation and prevent "uncontrolled, widespread strife and bloodshed." During the war, Israeli military forces committed numerous serious breaches of international humanitarian law, including failure to protect civilians, extra-judicial executions (including massacres), along with the mass destruction of property without military necessity.

It is these violations, which resulted in the particularly strong language set forth in UN General Assembly Resolution 194, 11 December 1948 calling for the return of refugees to their homes, restitution of property, and compensation for losses and damage. While individuals responsible for war crimes during WWII are still being brought to trial today, no person has ever been brought to justice for war crimes committed during the 1948 war inPalestine. Moreover, the international community has failed to implement UN Resolution 194 as an effective remedy to the serious breaches of international law that led to the mass displacement and dispossession of the Palestinian people. In the 1967 occupied Palestinian territories, the United Nations recognized Israel's grave breaches of the Fourth Geneva Convention as war crimes as early as 1972 (UN CHR Resolution No. 3 XXVIII, 22 March 1972).

The UN Commission on Human Rights took note of the fact that, under the Fourth Geneva Convention of 12 August 1949 (having to do with the protection of civilian persons in time of war), unlawful deportation or transfer, unlawful confinement, deprivation of the rights of fair and regular trial, taking of hostages and extensive destruction and appropriation of property all constituted grave breaches of that Convention and war crimes. This also included a series of ongoing attacks on Palestinian refugee camps, especially in the Gaza Strip during the 1970s and 1980s under the supervision of both Ariel Sharon and Shimon Peres. en.kiev.natashaescort.com

From the early 1970s to the late 1980s the UN General Assembly annually called for the protection of Palestinian refugee camps and between 1982 and the beginning of the Oslo process, the Assembly issued annual resolutions calling upon the UN Secretary General, in consultation with UNRWA "to undertake effective measures to guarantee the safety and security and the legal and human rights of the Palestinian refugees in the occupied territories." No effective, systemic action was taken to implement these resolutions and uphold international law. In 1982 several thousand Palestinian refugees living in the camps of Sabra and Shatila in Lebanon were brutally slaughtered by Israeli-allied Phalangist militias under the eye of the Israeli military.

In the aftermath of the massacre, the UN once again called for the protection of Palestinian refugee camps. The Assembly concluded that the massacre of Sabra and Shatila constituted an act of genocide, UN General Assembly Resolution 37/123(D), 16 December 1982. Attacks on Palestinian refugee camps resumed in late 1980s following the outbreak of the first intifada in the 1967 occupied territories. Once again the United Nations, including the Office of the UN High Commissioner for Refugees called for the protection of Palestinian refugee camps. Why was nothing done to implement these resolutions? Why did the international community fail to protect innocent Palestinian civilians residing in refugee camps despite repeated pronouncements for three decades? Why has the international community failed to hold accountable those responsible for serious breaches of international law, including war crimes and genocide?

International Law and Durable Solutions
The failure to fully uphold international humanitarian and human rights law and hold responsible those who have committed serious breaches of international law, including war crimes and genocide, has severely impeded and ultimately obstructed international efforts to facilitate a comprehensive, just and durable solution to the conflict in the Middle East.
It has provided a license for the continued violations; it has weakened popular support for the political process, which is viewed as unable to defend and guarantee respect for fundamental rights; it has deprived the international community of a standard benchmark or a 'set of rules' to regulate relations and adjudicate disputes between the parties; and, it has tarnished the overall credibility of the system of international human rights and humanitarian law and of the United Nations as body mandated to maintain international peace and security.

The same legal principle holds true for the international community's lack of effective intervention to uphold the rights of Palestinian refugees - i.e., right to return, right to real property restitution, and right to compensation for losses and damages. Moreover, it may be argued that because rendering a person a refugee violates all of the articles of the Universal Declaration of Human Rights, the act of generating refugees might qualify as an 'international crime', on par with slavery, genocide and apartheid. How much more so when nearly 75 percent of an entire people have been displaced or made refugees either inside or outside their historic homeland.

The durability of any future political process between Israel and the PLO will depend, in large part, upon the willingness of the international community to uphold international law and fulfill its obligations in full as set forth in 1945 Charter of the United Nations. This includes prosecution of those responsible for past and future violations and serious breaches of international law. For the last several months the United States and some European allies have invested a great deal of energy in linking political reform of the Palestinian Authority (PA) to a renewal of political negotiations and the prospect of a comprehensive solution to the conflict.

A durable solution to the conflict, including a solution to the plight of Palestinian refugees, however, will not only depend on PA reform; it will also depend upon significant reform of American, European and Israeli policy to bring it in line with international law. On the anniversary of World Refugee Day this year (20 June 2002), US President George Bush affirmed "America will always stand firm for nonnegotiable demands of human dignity and rule of law." In Mr. Bush's own words, what is needed now is not just words but action, that includes full support for the right of Palestinian refugees to return to their homes