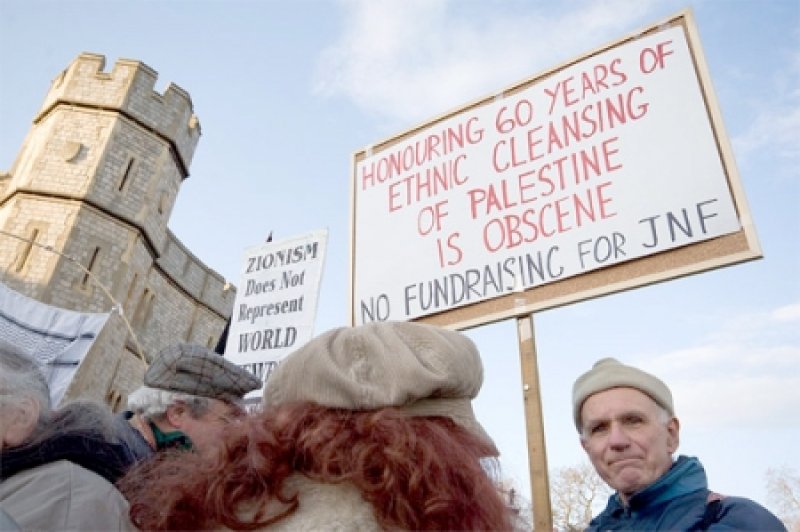 The attack on Gaza at the start of 2009 changed the political terrain irreversibly for Israel and this is reflected in the impetus the events imparted to the Boycott, Divestment, and Sanctions (BDS) campaign. Israel’s defense of its behavior was tacitly or explicitly endorsed by Western Governments and this complicity strengthened the argument in many quarters that civil society action was going to be necessary to constrain Israel’s violence and to support the Palestinian struggle for freedom. The year 2009 saw trade unions, civil society organizations and activists mobilize significant support for the Palestinian call for BDS.

In general, there is strong support for Israel at the apex of society, in government, police and Parliament, and this includes a readiness to defend the Jewish National Fund (JNF). At lower levels, however, Israel enjoys very little support, as does the Zionist project in general. Over the years numerous credible opinion polls have confirmed this, including a BBC World Service poll of opinion in 27 countries which reported that Israel is viewed more negatively than any other country in the world and “most negatively in the…Middle East, although also in Europe.”1

Any BDS campaign operates, therefore, in a situation of Israeli vulnerability stemming from their unpopularity across a majority of the population and intense opposition from the anti-apartheid activists who are needed to sustain campaigning. The JNF, registered in Israel as Keren Kayemet LeYisrael, is possibly more vulnerable than other bases of Zionist support.

Efforts to date have focused on challenging the charitable status of the JNF in the countries in which it operates. To be effective, an anti-JNF campaign needs to combine both legal and grass-roots components. As far as legal possibilities are concerned, the arrest warrants successfully issued in the UK against a few Israeli war criminals - Tzipi Livni, Doron Almog and possibly others - shows that some legal authorities are prepared to act against Israeli criminality despite the strongly pro-Israeli policies of the government. This particular lever of “universal jurisdiction” is not operative in all legal systems but the point that these examples make is that even inside the legal apparatus of a very pro-Israel state, there remain areas of that legal apparatus which will oppose domestic complicity in Israel violations of international law. Not every legal official is prepared to allow charitable status to an organization dedicated to a program of ethnic cleansing. A relevant example of a high-level rebuff to the JNF came when the UN’s Committee on Non-Governmental Organizations (NGOs) rejected the application of the JNF-USA for consultative status with the UN Economic and Social Council (ECOSOC). The claims of the US JNF that it is not involved with the Israeli JNF-USA were disbelieved by the majority.

On the ground, challenges to the JNF are growing and, in some areas, their previous ability to organize unopposed has gone. In Scotland, every public appearance of the JNF has been met with a counter-demonstration since 2001 when Bill Clinton spoke at a JNF fund-raiser in Glasgow. There are always hundreds at the Glasgow Hilton anti-JNF protests and even a few dozen when they organize a golf game at an isolated course. When Shaul Mofaz spoke for the JNF the following year at the same Hilton, hundreds of angry demonstrators blocked the main entrance for hours, the catering staff declined to serve the JNF event, and the diners already inside had the novel experience of having to serve themselves.

On October 2, 2003, San Francisco-based Jews for a Free Palestine organized a protest of 40 in front of the Jewish Community Federation which houses the Jewish National Fund. The protest was part of a larger campaign for Jews to renounce aliyah, literally the act of ascending, and is the word used to describe Jewish immigration to Israel under the Israeli Law of Return. Over a period of three years, the campaign focused on confronting the fundamental justification of the JNF-confiscation of Palestinian property and land held in trust for Jews living anywhere in the world under the JNF statute and Israeli law.

Thousands of signatures were collected for a statement renouncing Jewish immigration as a matter of right. One signatory reported that years later, when she moved to Israel after marrying an Israeli and becoming politically active there, she did not make aliyah because of the campaign. The campaign included protest, public education and civil disobedience. One action involved a small group of anti-Zionist Jewish activists entering a fundraiser and disrupting it as Zionists physically attacked protesters while public officials watched in shock. The police were brought in to protect protesters even as they were arresting them. Following the protest a San Francisco official publicly supported the demonstrators and condemned the violence against them.

Protest can undoubtedly be effective. British entertainer Ruby Wax canceled her appearance at Israel’s Independence Day celebrations in London shortly after facing hundreds of protesters on her way to speak at a JNF fundraiser in Glasgow in March 2004. Wax cited Israel’s assassination of Sheikh Ahmed Yassin as her reason, but Zionist Federation President Eric Moonman added, “Miss Wax had a bad experience at a JNF function and after that she was thinking of pulling out.”

In January 2006, US Secretary of State Colin Powell was also met by hundreds of anti-JNF protesters; American actor Michael Douglas canceled his appearance for the JNF in Glasgow in November 2008 and was replaced by Hollywood actress Goldie Hawn, who spoke to the well-to-do diners during the Gaza siege, again behind hundreds of police holding off demonstrators, on the topic of “Laughter is the best medicine.”

The lack of confidence of the JNF is clearly seen in a correspondence that ensued between the JNF-UK and the Scottish Palestine Solidarity Campaign (SPSC) after the latter had distributed material observing that the JNF was an “extremist racist organization involved in ethnic cleansing in Palestine.” The JNF was foolish enough to have lawyers threaten legal action for this supposed “very serious libel” and demanded an apology in addition to damages and legal fees. The SPSC replied inviting the JNF to proceed. Although financially well endowed, the JNF, retreated from its threats against a relatively puny solidarity campaign that challenged them because they will never willingly allow their aims and activities to be scrutinized by adversaries in a court of law. Since they know that an appearance in court could be very damaging to them, one strand of any grass-roots campaigning must be to achieve precisely this goal: to force the JNF into court.

Elsewhere in the UK protests against the JNF were prominent outside Windsor Castle where a JNF fundraising dinner was hosted as part of Israel’s celebration of 60 years of ethnic cleansing. The most high profile protest yet took place during the JNF 2009 conference in London. Two Palestine solidarity activists managed to get inside the event, hearing directly from JNF and Israeli government representatives of their plans to further ethnically cleanse in the Naqab. After disrupting a speech by Israel’s ambassador to the UK, the two were ejected from the event but, tellingly, were not arrested. Meanwhile, Tzipi Livni, the star speaker at this event, did not step foot in the UK fearing arrest as a war criminal. She was right to be cautious since on this occasion Palestine human rights lawyers had a warrant waiting for her.

In Australia the Melbourne Palestine Solidarity Network organized a strong protest outside a JNF dinner in 2007 when Prime Minister John Howard received the “honor” of having a forest named after him in Israel’s Negev region as protesters chanted “Stolen land, Israel, stolen land, Australia.”

An important step forward for the campaign against the JNF is the news that the France BDS Committee has made the campaign one of its priorities. Already there have been vigorous demonstrations outside JNF fundraisers and also in 2009 at an environmental exhibition in Paris.

Activists in Canada have campaigned against the JNF for many years. Protests outside fundraisers and events have focused on the Canadian government’s strong support for Israel and on the story of the destroyed Palestinian villages in the JNF’s so-called “Canada Park.” The campaign in Toronto, launched on Land Day 2005, is particularly focused on stripping the charitable status of the JNF.

There have been some legal challenges as well. In the U.S., as long ago as the 1960s, ten Palestinians, an Israeli and five U.S. citizens brought a suit to revoke the tax-exempt status of six Zionist organizations, including the JNF. In Canada, an application was submitted in 2009 to the Canadian tax authorities to strip the JNF of its charitable status. In both Canada and the UK, numerous complaints have been raised with the respective charity regulators in relation to the JNF. In Scotland campaigners entered into in a consultation process which re-drafted charity law, highlighting JNF’s racist practices, its manifestly political nature, and its involvement in both ethnic cleansing and illegal occupation. The rejection of complaints against the JNF came as no surprise, given that British Premier Gordon Brown is a patron, and political interference is the norm.

Most recently, the campaign to renounce aliyah and to break the Law of Return has been resumed as part of the global BDS movement. An important component of the campaign has been to challenge a fundamental premise of the Jewish National Fund – extraterritorial Jewish nationality that allows the JNF to maintain racist and colonial policies and practices of land and property confiscation.

International Organizing Conference to Challenge the JNF, May 2010

The JNF is a core issue of BDS. It is a unique lever for BDS activists since the JNF is a permanent and long-term feature of the political environment and of Zionist presence in dozens of countries across the planet. JNF offices are known, sponsors of their events are known, and their elite political sponsorships make the organization particularly susceptible to challenges waged through the democratic structures of lobbying, and political campaigning at both government and local council level.

Most people do not know that the JNF is engaged in ethnic cleansing. As such, public education is a key component of the campaign and there are already some excellent resources available for the campaign on the JNF.

The goal of the international coordination of campaigns against the JNF initiated by the Palestinian BDS National Committee (BNC) in partnership with the Scottish Palestine Solidarity Campaign, the International Jewish Anti-Zionist Network and Habitat International Coalition is to build on the work done to challenge the JNF toward imposing legal, economic and popular sanctions on the organization.

In May 2010 an organizing conference is being held in Edinburgh aims to share knowledge, best practice and to build up the networks of experts, campaigners and activists working to finally strip the JNF of its legitimacy amongst civil society.

More in this category: « Metropolitan Aspects of Zionist Organization Photo-story: A Trip to al-Qabu »
back to top