The Suffering of Palestinian Refugees from Syria in Lebanon: the Implications for the Right to Return 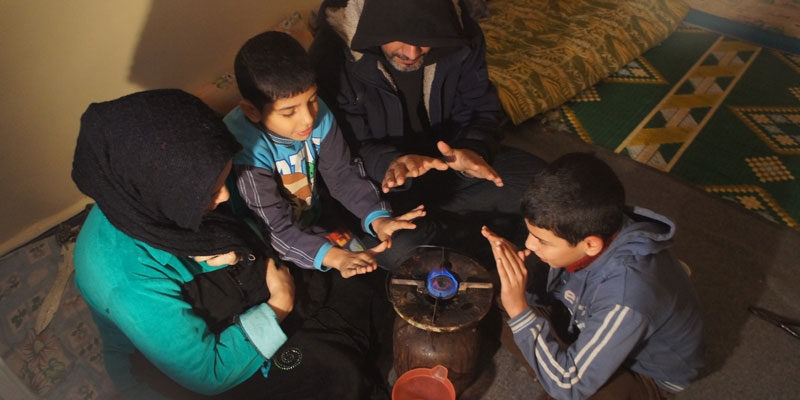 With Palestine remaining the central concern of the broader Arab nation, being at the center of the conflict between Zionism and the Arab countries, it follows that a constant and persistent monitoring of the changes sweeping through the Arab countries would be instructive to understanding how such changes might impact the Palestinian cause. One urgent and pressing matter within this broad theme is the plight of Palestinian refugees from Syria. While the world’s attention has understandably been focused on the repercussions of the Syrian crisis on the wider region, such as the way it impacts Israeli security and the possible impact on religious and ethnic communities across Syria, Iraq and Lebanon, this community has been largely neglected. This marks another chapter in the history of world apathy towards Palestinian refugees, whose suffering extends back to their original forced exile in 1948.

The failure of the Palestinian political leadership to chart a neutral path to avoid entanglement in the domestic affairs of Syria led to a situation where Palestinian refugee camps turned into battlegrounds in the war between the Syrian government’s forces and the opposition. This entanglement in the Syrian domestic affairs is a direct result of the lack of a national Palestinian vision to preserve the sanctity of the Palestinian cause. Soon the camps were no longer safe. Unlike their counterparts in Lebanon, Palestinian refugees in Syria had not previously been subject to internal displacement or homelessness, and had never suffered discriminatory government policies. With the intensification of the fighting in and around the camps, and dwindling supplies of food, Palestinian refugees faced two options: either remain in camps and wait for death, or leave Syria towards the unknown.

Such restrictive measures resonate with the views expressed by Gebran Bassil, the Minister of Foreign Affairs. Commenting on the flow of Syrian refugees into the country, Bassil stated:[6]

When we say we don’t want the displaced Syrians and Palestinians to take our place, this needs to be backed up by action. They are taking the place of the Lebanese by their mere presence, work and life here [...]. This comes out of our sense of nationality and not on racist bases. The emigration from our land must stop. Our youth is leaving and our place shouldn’t be given to others… I am not saying that we need to close the borders. Our borders should be for exporting goods abroad and for protecting ourselves and our country, Lebanon, from all that is bad and contraband. This is the reason for having borders, not as an avenue for strange and evil ideas to enter and eat us from the inside.

UNRWA is already heavily burdened with the relief of Palestinian refugees in Lebanon. However, since they do not fall under the mandate of the United Nations High Commissioner for Refugees (UNHCR), UNRWA is the first and last resort for Palestinian refugees from Syria who are also excluded from the aid provided by the Lebanese government for Syrian refugees. This includes education in state-sponsored schools. Any aid from UNRWA, meanwhile, is modest and limited. For example, UNRWA distributes $100 for each family every month. This sum is supposed to cover housing expenses, and $30 for food, pending the availability of funds.[7] This leaves the refugees with the burden of finding shelter in a country where the average rent for a room exceeds the rental rates in large parts of the developed world, including Europe and the USA. One advantage they enjoy is that of the large Palestinian community in Lebanon, especially in refugee camps, that provides solidarity and assistance. This solidarity is manifest in different ways.

Ein el-Hilweh refugee camp, for example, hosts more than 15,000 Palestinian refugees from Syria, alongside 200 families of Syrian origin, despite the fact that the camp’s one square kilometer was already supporting a population of more than 80,000. The institutions entrusted with the welfare of these refugees have largely abandoned them in a moment of distress, leading to a protest which lasted for six months outside of UNRWA’s Lebanon Field Office, its main hub in Beirut.[8] With lack of support from relief agencies, and the prolonged length of stay of Palestinian refugees from Lebanon, many property owners are demanding higher rent rates. As a result, the Popular Committees which provide a semblance of governance in the camps (and which are dominated by Palestinian political factions) are facing mounting challenges. In addition to internal conflicts, corruption and lack of capacity, they also lack the ability to manage humanitarian crises. Today, political factions are required to make additional efforts (instead of politics and national mobilization) to compete with civil society institutions in providing relief and aid work. Lacking the required expertise, however, these factions are failing to provide humanitarian aid, a failing that adds to the being politically ineffective.

There are modest efforts from Palestinian civil society in Lebanon. They focus on providing relief and assistance, which are as scarce as the resources available to that sector. On the political level, there is even less effort. A seminar held by the Aidoun Center for Refugee Rights concluded with an appeal for all parties concerned - the Syrian General Authority for Palestine Arab Refugee Affairs (GAPAR), UNRWA, the PLO, Palestinian factions and the state of Lebanon.[9] The recommendations include:

Calls on the Palestinian factions to continue their work in order to make Palestinian refugee camps in Syria weapons-free, neutral zones, and to allow these camps to serve as the refugees’ starting points in their journeys to return.

Consequently, many Palestinian refugees opted to return to Syria: faced with the difficulties placed before them in Lebanon, and plagued by the failure of the Popular Committees and relief agencies to alleviate their plight, they felt that trying their luck in a country where they could be bombed at any instant would be more dignified than the situation they were facing in Lebanon. However, those who did return found the situation to which they came back more bitter than they expected. Return to Syria was always going to be a last resort for Palestinian refugees who went to Lebanon, only to be treated like criminals there. With the security forces forcing them to leave after one year, it was very clear to them that they had to either find another destination to move to, or to go back. The situation is summed up by a Palestinian refugee from Syria, previously resident in the Yarmouk Camp:

I can’t go back to Syria, even if the regime wins or the opposition wins. I was imprisoned by the regime and subjected to torture, only because I kept my home in the camp. They accused me of helping the opposition. And those who occupied the camp don’t represent me, they are strangers, and Lebanon does not employ Palestinian refugees who are here, how should I live? I have no other option but to immigrate to a European country.

The harsh security and humanitarian reality that Palestinian refugees suffer from in Syria and in the diaspora at large, the failure of the Palestinian factions to prepare the camps and keep them out of the Syrian crisis, and the failure of the international community to support them means that there is a clear threat to the realization of the Right to Return. This threat can be summarized as follows:

First: A pattern of systematic destruction of Palestinian refugee camps is emerging in recent years, like Jenin in Palestine, Nahr al Bared in Lebanon and now the camps in Syria. This destruction aims to dismantle the camps as incubators of the refugee issue. The deteriorating living conditions in the camps notwithstanding, they serve as physical vestiges of the Nakba and as bridges to a collective memory of Palestine. Throughout the struggle with the Zionist enemy, the camps remain a sanctuary and home of rebels and preserve the Palestinian national identity.

Second: The multiple displacements of Palestinian refugees serve to distract them from the larger issue of their return to Palestine. The evidence for this is given a dramatic illustration by the Palestinian refugees and Syrians who drowned in the Mediterranean in increasing numbers following the conflict in the Yarmouk Camp.[10] The responsibility for these human tragedies lies on the shoulders of Egypt, which barred Palestinian refugees from entering its borders and humiliated others who were only trying to emigrate.[11] Many of those in Egypt were given the choice between going to Gaza or returning to Syria. Other refugees who went to Lebanon were “greeted” by the authorities at Beirut Airport, where they were given a one-week deadline to leave the country.

The consequences of the Syrian crisis are severe for the Palestinian refugees and their right of return. There is a need to give their cause its due attention: host countries of Palestinian refugees from Syria should treat them like other legally defined refugees and provide them with protection. The international community has the responsibility to secure the necessary assistance to safeguard the dignity of refugees in Syria and in the diaspora and support their steadfastness. Palestinian factions need to work at all levels: Arab, regional and international, to keep the Palestinian camps in Syria neutral in the Syrian conflict and keep these camps safe for their population until they return to their villages and lands in Palestine. Finally, the Palestinian Authority must raise the refugee issue at the negotiating table, and not miss an opportunity to put pressure on Israel and the international community to implement international agreements and UN Resolution 194.

Mahmoud Zeidan: Founding member of the Center for Refugee Rights – Aidoun, Lebanon and joint Manager, together with Diana Allan, of the Nakba Archive Project.

[3] Foundation for Human and Humanitarian Rights Lebanon, “Syrian Refugees in Lebanon and the Case for Camps Establishment,” April 2013, http://www.academia.edu/5624397/Syrian_Refugees_in_Lebanon_and_the_Case_for_Camps_Establishment; Migration Policy Center, “Syrian Refugees: A Snapshot of the Crisis – in the Middle East and Europe,” accessed November 5, 2014, http://syrianrefugees.eu/?page_id=72.

[6] Gebran Bassil, “Statement Made on the Celebration of the Lebanese Wine Day,” January 2012.

More in this category: « Palestinian Refugees from Syria in Lebanon: An Overview The Humanitarian and Legal Status of Displaced Palestinians from Syria and Lebanon »
back to top