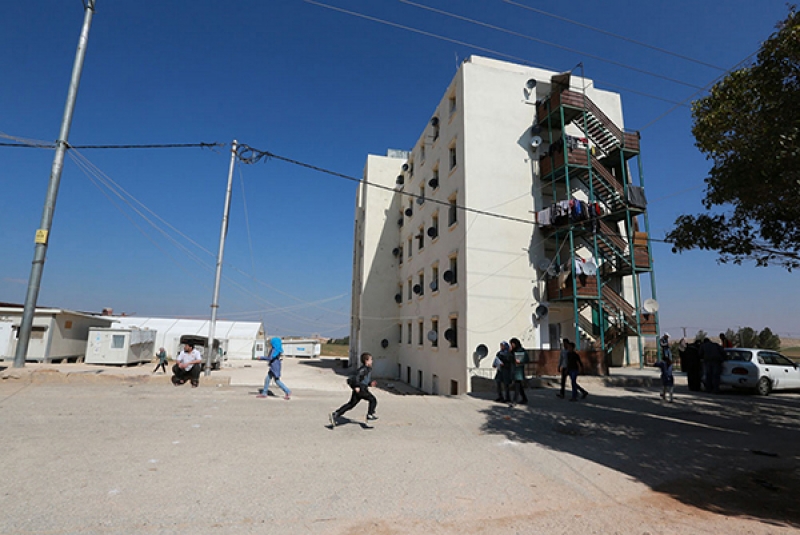 Palestinian refugees from Syria rely on UNRWA emergency assistance. The vast majority move to urban settings; however, 190 are housed in a holding facility, Cyber City, near the border with Syria. Cyber City, Jordan, February 2014. (Source: unrwa.org)

Jordan: not a safe haven for Palestinian refugees from Syria

Cyber City: the entrapment of Palestinian refugees from Syria in Jordan

The premeditated policy of fencing in Palestinian refugees into Cyber City and hermetically sealing them off from any access to their rights to protection, movement and education, is the tale of more than 66 years of displacement and dispossession that four generations of Palestinian refugees have been suffering from.

The Jordanian authorities erected a fence around the entire compound, and placed two police checkpoints, one at the entry of the industrial area and the other within the confines where the Palestinian refugees are detained as a higher level of security is enforced. The second checkpoint restricts the freedom of movement of refugees to the building and the immediate vicinity. In addition, there is an intelligence bureau under the command of the Jordanian army that has the duty to screen and monitor every movement within the camp, either from the refugees themselves or the flow of aid from UN and other humanitarian organizations. At times, security forces prohibit non-governmental organizations and humanitarian workers with valid permits from accessing the camp, making it difficult to ensure refugee rights are upheld and proper protocol is followed.[9] The residents of Cyber City can leave every two to three weeks to visit their family members in Jordanian cities for a maximum period of 48 hours. Other than that, Palestinians living in Cyber City can only leave the camp to return to Syria.

Detained refugees have complained about mistreatment, and cries for help continue to emerge from Cyber City.[10] According to Human Rights Watch “at least one man, Mahmoud Murjan, died after Jordanian authorities deported him from Cyber City to Syria in September 2012”. He was forcibly returned to Syria, along with his wife and children, on 25 September 2012.[11] Amnesty International reported that he was “forced by Jordanian security officials to sign a ‘voluntary’ paper that he would go back to Syria despite allegedly being wanted by the Syrian authorities”,[12] and an interviewee who spoke to the organization on the phone as he was being returned told Human Rights Watch that “the authorities who took him to the border threatened to shoot him if he did not continue walking back into Syria”.[13] Murjan was killed in Syria 20 days later, on 15 October, after armed men invaded his house, shot him in the leg in the presence of his wife and children, and pulled him into a car. Later that day, his body, showing marks of torture, was dumped on the street in front of his father’s house”.[14]

On two separate notes, two residents from Cyber City spoke to the Euromid Observer for Human Rights and mentioned an attempted suicide by a refugee who was threatened by Jordanian authorities to be deported back to Syria. Four young students were able to flee the camp in an attempt to continue their education, but did so at the price of not seeing their families again.

The abuse and deportation are not the only evidence of Palestinian refugees’ entrapment in Jordan. Cyber city’s state of poverty, the uninhabitable small rooms that are overcrowded and suffering from mold and moisture: keep them locked in, with minimum resources to survive, just enough to keep them alive but do not make it too comfortable so as to push them to leave Jordan or see alternatives. While Jordanian authorities have been responsive toward Syrian refugees, granting them humanitarian services and allowing the UN High Commissioner for Refugees to support them, Palestinian refugees from Syria are rarely eligible for such services.[15]

The second category of Palestinian refugees carry (expired) Jordanian passports or other Jordanian identity documents such as family books or birth certificates and were deported by the Jordanian authorities to Syria in 1970-71, following the Black September fighting between Palestinian armed groups and the Jordanian army. These Palestinians do not hold Syrian-government issued ID cards, neither their children who were born in Syria. Their children were not allowed to inherit their parents’ Jordanian passports or travel documents, nor were they granted a Syrian travel document. The children and grandchildren of those who were involved in Black September more than 40 years ago are until this day held accountable by the Jordanian government for something their grandparents might have done before they were even born.

A third category of Palestinians received identity documents issued by the Palestinian Liberation Organization mission in Damascus, along with their birth certificates they can prove to which category of Palestinian refugees they belong. Finally, the fourth category is that of Palestinians whose Jordanian citizenship has been stripped by the Jordanian Authorities, depriving them from any form of valid identification. Jordan has deported at least two Palestinians back to Syria after annulling their Jordanian passports, and in such endangering their lives as they cannot identify themselves at government nor opposition checkpoints, forcing them to live in risk and without access to humanitarian assistance. Internet business turnkey casino software Take advantage of the best offer for you.

There is one case of a young man, Ali, in his twenties, born to a Palestinian father with a temporary Jordanian passport and a mother who carries a Lebanese travel document for Palestinian refugees. Ali’s grandfather was deported from Jordan to Syria following Black September in 1970. “Ali was not yet then born, but his entire family is now blacklisted and prevented from seeking refuge in Jordan — despite Ali’s father holding Jordanian documents. Ali lacks any official documents proving his nationality. He was not able to inherit his father’s Jordanian passport, nor to be added to his mother’s Lebanese UNRWA family card, nor able to obtain any Syrian documentation, leaving him an embodiment of the eternally stateless Palestinian refugee”.[16]

Jordanian Prime Minister Abdullah Ensour said: “We have to take all measures to ensure that Jordan does not become a substitute homeland for the Palestinians,”[17] disregarding the fact that these Palestinians fleeing the Syrian war are humans before being Palestinians. Ensour added that Palestinians from Syria should be allowed to return to their places of origin in Palestine, and that “Jordan is not a place to solve Israel’s problems. “Additionally, the head of Jordan’s Royal Hashemite Court told Human Rights Watch “that the influx of Palestinians would alter Jordan’s demographic balance and potentially lead to instability”.[18] Deportations of Palestinians to Syria are a violation of Jordan’s international obligation of non-refoulement, the international customary law prohibition which protects refugees from being sent back to places where their lives or freedoms could be threatened.

Unlike the rest of the Syrian population, this was not Palestinian refugees’ first exodus to neighboring countries. For some Palestinians, this was their second or third displacement since their initial expulsion from Palestine in 1948. Unfortunately, Palestinian refugees have been caught in a limbo of regional politics and the blind spots of international law, making them the most vulnerable refugee group in the Middle East. More than half a million Palestinians in Syria are refugees and stateless persons and members of a dispossessed people, as another generation of Palestinians is forced to experience the trauma of displacement in search of safety.

Cyber City in Jordan is a relevant illustration that the applicability of human rights is not a universal concept. Discrimination on the base of ethnicity is taking place as Palestinian refugees from Syria are being prevented from their rights to protection, education, and freedom of movement while fearing deportation and intimidation.

Palestinian refugees from Syria in Jordan are being shunned even by UN organizations, relief organizations and donor countries which have not addressed properly the humanitarian concerns facing Palestinians refugees in Jordan. According to Human Rights Watch, “the 2014 Syria Regional Response Plan’s section on Jordan, which frames policy dialogue and operational coordination, excludes Palestinians, and the Inter-Agency Task Force (IATF), the local coordination mechanism for aid agencies working on the Syria refugee response in Jordan chaired by the United Nations High Commissioner for Refugees (UNHCR), does not discuss issues relating to Palestinians from Syria”.[19]

Hanine Hassan is Dean's Fellow and PhD candidate in the department of Middle Eastern, South Asian, and African Studies at Columbia University in New York. Her research interests include political theory and Affect theory in the context of oppression and exploitation. Her work experience focuses on human rights violations in conflict areas, from direct monitoring to policy and program development and protection, with a focus on refugees and internally displaced people.

More in this category: « Palestinian refugees from Syria in Jordan: An Overview
back to top