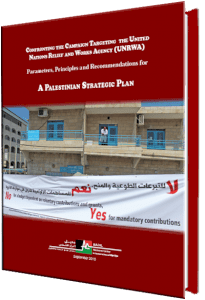 PR/EN/021018/30
BADIL has published a position paper on Confronting the Campaign Targeting the United Nations Relief and Works Agency (UNRWA), which was originally published in Arabic two weeks ago. BADIL presents this paper as a Palestinian strategic plan. It emphasizes the parameters, principles and recommendations that constitute foundations for developing a UN General Assembly (UNGA) resolution.

Over the course of 2018, in a series of papers, press releases and private advocacy actions, BADIL has sought to call attention to the most recent political attack on the rights of Palestinian refugees and IDPs. In the midst of the most severe attack of a long-sustained campaign by Israel, the United States, and their allies to undermine, transform and eliminate UNRWA into a defunct, ineffectual agency and to liquidate the issue and rights of Palestinian refugees, BADIL is now urgently calling for a new official and grassroots strategy to address the crisis.

Under entrenched principles of international law, for so long as the state [i.e. Israel] that is responsible for the displacement of refugees is unwilling or unable to ensure that those refugees enjoy their sanctioned rights, the international community is bound to ensure legal, humanitarian and physical protection. This is an obligation. It is not charity. In the case of Palestine, the international community, particularly the United Nations, bears a special responsibility for the creation and perpetuation of the ongoing catastrophe of the Palestinian refugees.

With this most recent paper – already presented to the Palestine Liberation Organisation (PLO), political parties, civil society organisations, and national actors – BADIL sets out a clear rationale and new strategy that demands the PLO leadership go beyond the discourse of reaction, appeals and seasonal statements concerning the status of Palestinian refugees and IDPs and the political attack on UNRWA.

BADIL is calling for a PLO-led mobilization of UNGA member states to adopt a new resolution that, among other things:
Calls on the UN Secretary General to take practical measures and develop a mechanism to implement UNGA resolutions concerning the protection and management of Palestinian refugees’ properties, and ensure Palestinian refugees and IDPs benefit from the proceeds of their properties.
Share