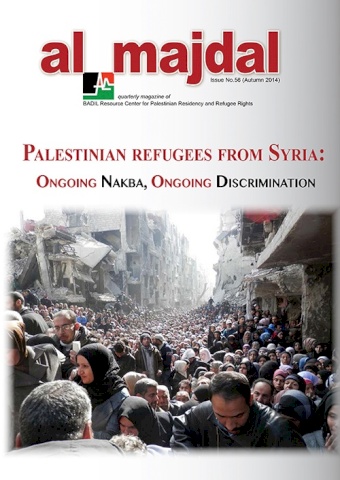 In 2011, fighting broke out in Syria, creating over three million refugees fleeing mainly to surrounding Arab countries such as Lebanon and Jordan.[1] Alongside the Syrian citizens affected by the conflict is a population of about half a million Palestinian refugees.[2] As former Commissioner-General of United Nations Relief and Works Agency for Palestine Refugees (UNRWA), Filippo Grandi, put it in a January 2014 lecture at the American University of Beirut:

Palestinian Refugees from Syria in Lebanon: An Overview

The influx of Palestinian refugees into Lebanon started in July 2012, “after a string of mortar attacks upon the Yarmouk refugee camp killed 20 people”, and increased in December 2012, “when a Syrian jet bombed a mosque and a school inside the Yarmouk refugee Camp”.1

The Suffering of Palestinian Refugees from Syria in Lebanon: the Implications for the Right to Return

With Palestine remaining the central concern of the broader Arab nation, being at the center of the conflict between Zionism and the Arab countries, it follows that a constant and persistent monitoring of the changes sweeping through the Arab countries would be instructive to understanding how such changes might impact the Palestinian cause. One urgent and pressing matter within this broad theme is the plight of Palestinian refugees from Syria. While the world’s attention has understandably been focused on the repercussions of the Syrian crisis on the wider region, such as the way it impacts Israeli security and the possible impact on religious and ethnic communities across Syria, Iraq and Lebanon, this community has been largely neglected. This marks another chapter in the history of world apathy towards Palestinian refugees, whose suffering extends back to their original forced exile in 1948.

Palestinians have been displaced from Syria since the beginning of the conflict. However, since the doors were closed to emigration to other countries (legally and politically),[1] and due to the history of solidarity relationships with Syrians, the displacement of Palestinian refugees in Syria became an internal phenomenon. The refugee camps and relatively secure Palestinian communities were able to absorb those that were forced to flee.

Housing approximately a third of the Palestinians in Syria, Al-Yarmouk refugee camp is the largest camp in Syria. In December 2012 it was attacked by armed groups, forcing the regime’s forces to retreat and resort to military air strikes. Notwithstanding, the camp was able to absorb tens of thousands of displaced Palestinians, as well as some Syrians,[2] before the clashes led to its destruction, the death of hundreds, and the displacement of 95% of its inhabitants.[3]

Palestinian refugees from Syria in Jordan: An Overview