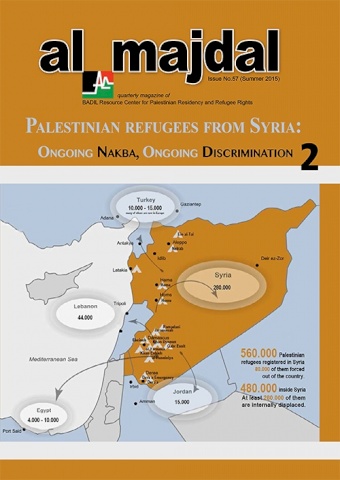 
BADIL releases the Summer 2015 issue of al-Majdal (#57), titled “Palestinian refugees from Syria: Ongoing Nakba, Ongoing Discrimination 2”. This is the second of our two-issue focus on Palestinian refugees in/from Syria. In both issues, the articles survey the humanitarian and legal status of displaced Palestinians, elaborate the international framework in the Syria crisis, and discuss the implications of this crisis and the terrible outcomes it leads to.

The preceding al-Majdal covered the situation of Palestinian refugees from Syria in Lebanon and Jordan. The current issue presents an account of their situation in Syria, Egypt and Turkey.

The crisis that broke out in Syria in 2011 has had devastating consequences on the country and its inhabitants. Regarding the Palestinian refugees, the legal and political context in which they find themselves makes them an especially vulnerable group. There were 560,000 Palestinian refugees registered with UNRWA in Syria when the conflict erupted. By April 2015, at least 80,000 have been forced to leave the country. 44,000 found their way into Lebanon and 15,000 into Jordan before these countries closed their borders to Palestinian refugees from Syria.[1] Of the 480,000 Palestinian refugees remaining in the country, 280,000 are internally displaced, and 95% are in continuous need of humanitarian assistance. Despite the harsh circumstances they endure in Lebanon and Jordan, UNRWA estimates the numbers will grow by the end of the year.[2]

Palestinian Refugees in Syria: an overview

Soon after the outbreak of the crisis in Syria in 2011, the official spokesperson of UNRWA, Christopher Gunness, urged “to preserve the neutrality of the Palestinian refugees in Syria, so that the fulfillment of their needs continues”.[1] This impartiality, however, did not prevent Palestinian refugees from becoming victims of the conflict. The residents of Palestinian refugee camps in Syria bear very harsh conditions as they are no longer guaranteed basic standards of living. Many camps have turned into battlefields and their streets are under the control of snipers, often becoming the focus point of violent attacks.[2]

The Current Situation of Palestinians in Syria: An Eye-witness Testimony[1]

Before it had been affected by the conflict, al-Yarmouk refugee camp received more displaced Syrians than Turkey and Jordan. However, at the moment the living conditions at al-Yarmouk are growing grimmer by the day. Beginning in mid-December 2012, its inhabitants started to leave the camp, marking a new Palestinian displacement. Ever since, the majority of residents of al-Yarmouk have been displaced to Damascus and its surrounding area. Lacking shelter and sustenance, those displaced are experiencing very harsh conditions, as both Palestinians and Syrians lost their livelihoods. Al-Yarmouk used to be a significant commercial and industrial hub, accommodating several major markets within the boundaries of the city of Damascus. Palestinian and Syrian inhabitants of the camp have sustained irreparable damage. In addition to many casualties, al-Fida’iya neighborhood in the camp has been largely destroyed.[2]

When protests against the regime of the Assad family first started during March 2011, al-Yarmouk camp,[2] much like other Palestinian refugee camps, found itself inserted in a rapidly changing environment. The Palestinian stance and participation has been forged, on the one hand, by the politically sensitive status of this community, and, on the other hand, by the geographical evolution of the Syrian mobilization as well as the shift which occurred in the very nature of the uprising from a series of peaceful actions to a full-scale military conflict.

Palestinian Refugees from Syria in Egypt: an overview

Egypt: a desperate refuge for Palestinians fleeing the Syrian conflict

The Syrian conflict is entering its fourth year of destruction having impacted the entire population and forced millions to flee to neighboring countries. Among the nearly 3.8 million Syrians that have fled the country since 2011 are 80,000 Palestinians who previously lived in Syria and are now made refugees for a second, often third time. The conflict has affected all people from Syria, regardless of their religion or ethnicity, however Palestinians from Syria have been severely and disproportionately affected, apparent through the reception they have received by different host states, including Egypt.

The Palestinian-Syrian ‘protection gap’: inside an Egyptian police station

Detention is a key part of the story of irregular migration in the Mediterranean Sea. While much international press coverage has focused on high-profile boat tragedies, dramatic search and rescue operations, and increasingly, the impact of European Union policy, many thousands are detained each year for irregular migration across the Mediterranean. These protracted struggles with border authorities seemingly do not make as good a story.

(Interviewed by Wassim Ghantous on 25 February 2015)

Q: Who is Muhammad Darwish?
Muhammad Darwish is a 29 year-old journalist and director of a relief organization. He is Palestinian refugee from Al-‘Aideen Refugee Camp in Homs, Syria; originally from the destroyed Palestinian village of al-Shajarah, near Tiberias; and currently detained at Karmouz detention center, Alexandria, Egypt.

No way out: the second Nakba of Palestinian refugees from Syria escaping to Turkey