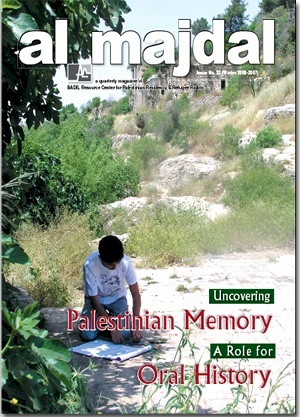 This issue of al-majdal presents Palestinian oral history as related by refugees and the displaced, including their concept of homeland, the Nakba of 1948 and the right to return home. Oral history allows us to take a journey into historical perspectives and records often neglected or obscured by other historical narratives. Because the oral narratives focus on everyday life, they help us connect to life and people from the past who continue to shape Palestinian culture and struggle at present. While most Palestinian oral history accounts are still available in Arabic only, more and more are being made available in English.

Documenting Palestinian oral history is critical now also because 2008 may well be the last decade anniversary when Palestinian eye-witnesses from the 1948 Nakba are still able to tell their story. "We cannot think of any other project more important than the al-Nakba Oral History to work on. We call on all organizations, activists, and individuals to collaborate and share their findings so we all can learn from each other's experience, and to keep duplication of efforts and resources at minimum," writes Salah Mansour in his article entitled "Lessons' Learned from the PalestineRemembered.com's Oral History Experience."

The Nakba and other subsequent displacement have resulted in the loss of numerous written documents and have dramatically shaped Palestinian identity. With the contribution of oral history, Palestinians are enriching their history to encompass all segments of society; giving a voice to the poor, peasants, women, those marginalized by the official ideological or national narrative - most importantly - those who have lived the Nakba of 1948. Including these diverse and multiple experiences and voices within national Palestinian history crucially seeks to uncover and deepen understanding of events that have shaped this people’s dispossession, colonization and occupation. It also permits to discover the richness of Palestinian culture and traditions, its diversity and complexity.

It nuances the official Palestinian narrative too often based on political personages and ideological dogma. Oral history also permits to challenge the written and dominant discourse surrounding the Nakba, a discourse dominated by proponents of the Zionist-Israeli narrative.   The upcoming commemorations - 40 years of Israeli occupation (2007) and 60 years of the Nakba (2008) - provide opportunities for furthering the place of oral history in Palestinian history. To this aim, many activities are planned (see the Call to Action on the back cover of this issue), such as the creation of a truth commission based on the South African model whereby witnesses and victims of the Nakba can tell their stories to parliamentarians, academics and international figures.

Oral history was, and will remain, one of the main sources of socio-historical understanding. One can say clearly that oral history is as old as history itself, especially important before the advent of writing as a means of communication, and later on as a main source for documentation. In the seventh century - the early years of Islam - and later on, controversy reigned over interpretation and the authenticity of the collected hadith (the oral speeches of the Prophet Muhammad), and other prominent personalities including al-Sahaba, who accompanied him in his prophetic mission.

The gathering of all the spoken hadiths of the prophet from oral sources of his companions, and the long period that elapsed before recording in writing, poses a serious question concerning accuracy and authenticity of the collected accounts.

The Role of Oral History in Archiving the Nakba

While Palestinian identity was not created by the 1948 displacement, the event has remained an important part of Palestinian history and collective experience, marking the loss of Palestine as a physical entity and its birth as a national signifier. In a recent article, Palestinian historian Elias Sanbar writes: “The contemporary history of Palestinians turns on a key date: 1948. That year, a country and its people disappeared from both maps and dictionaries.”1 Sanbar goes on to foreground the importance of cataloguing these disappearances as a means of creating a cultural and historical inventory of relation to pre-1948 Palestine.

Since many refugees from the generation of 1948 were illiterate few memoirs or journals exist and oral transmission has been the primary means by which this cultural heritage has been preserved.

The Role of Participatory Methods for Mobilizing Change

“Palestine for us is not just a country on the political map. For us, Palestine is a history, identity, life texture, living, breathing; it is absolutely unique. You made me cry by remembering it. We no longer have relations with Palestinians. The Palestinian families that lived with us are scattered now. Some left and some immigrated. I always ask my father to tell me stories about it, because I can’t even find a book with these facts. I started to seek my soul and my history, I no longer know where I am. I was watching a TV show when my father was telling me how the Zionists invaded. I no longer connect with this feeling. I feel that I am in a different world.

Those of us who have listened to Palestinian elders tell stories of dispossession, struggle, and survival know of the captivating power of these narratives, told so listeners can envision stalks of grain from a pre-1948 village glimmering in the sunshine of sixty years past. In informal settings, stories from the past are a pleasurable means of passing along knowledge and values.

A LITTLE INNOVATION: Overcoming the obstacles to recording history in the Galilee

Q: You have met families from ‘nearly every village’. How did you get to meet them all?

A: Simple: I just placed photos of the villages in the newspaper, and then my telephone didn’t stop ringing…

Interview with Jamil Arafat, a Palestinian historian who has been working in the field of oral history and wider history collection ‘since before Israel started’ and senior tour guide for ADRID’s trips to destroyed villages.

Oral History in the Palestinian and Sahrawi Contexts: A Comparative Approach[

Notwithstanding the specific features of the Palestinian case, many aspects of al-Nakba, or the Palestinian catastrophe have parallels in contemporary history.[2] One important but neglected case that lends itself to comparative research is the struggle of the people of Western Sahara for self-determination. Palestinians and Sahrawis have been denied their political rights that derive from the fact that they are nations. However, there is a fundamental difference between the two cases: Zionism expelled the Palestinian inhabitants in order to replace them with Jewish settlers on expropriated Palestinian land.

Since PalestineRemembered.com’s* inception in 2000 - the largest online community for Palestinian refugees on the internet - we have been looking for documented resources for Palestinian history & culture, especially for events pertaining to Nakba, but very little was found or available. Consequently, it became apparently clear that oral history is the only tool left to solve this problem. We also recognized that we should react quickly, otherwise, it could be too late since our refugee population, especially those who survived the Nakba, are aging quickly, and their memory could be lost forever.

The emergency job creation project was created to improve and rehabilitate social service infrastructure and housing conditions in the western villages of Ramallah and in refugee camps across the West Bank to mitigate the adverse effects of the economic crisis resulting from actions of the Israeli army and the construction of the Wall. Funded by Oxfam Solidarity Belgium (OSB) and implemented by Badil Resource Center, the aim was to create jobs based on a ‘cash for work’ model. Thirteen camps from the West Bank responded with proposals, alongside a small village in the Bethlehem district called al-Walajeh. In short, the project aimed to:

The following BDS initiatives were compiled between the end of October and beginning of December 2006.

Letter to PLO and United Nations from Palestinian Civil Society

To: Riyadh Mansour, Head of the Permanent Observer Mission of Palestine to the United Nations.