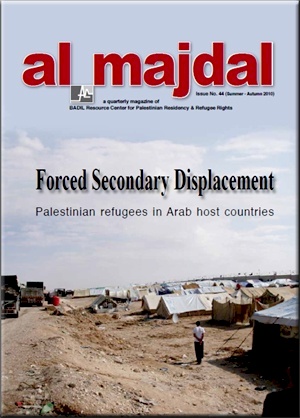 This issue of Al-Majdal and the one that follows focus on the secondary forced displacement of Palestinian refugees. Both issues also start with poetry and prose from around the world which cover issues relating to colonialism, forced displacement, and oppression.

Editorial: How Many Times Displaced?

The central aspect of Palestine’s Ongoing Nakba since 1948 is the forcible displacement of the indigenous Palestinian people from their homeland and the denial of their return by Israel.

According to Badil’s 2008 Survey of Palestinian Refugees and Internally Displaced Persons, only one third of the Palestinian people are persons who have never been forced to leave their homes, while almost seventy percent are refugees or internally displaced persons, victims of the forced displacement induced by Israel's ongoing policy of population transfer (ethnic cleansing). Approximately two thirds of these displaced Palestinians continue to live as refugees in forced exile outside the borders of their homeland, the British Mandate territory of Palestine – the state of Israel and the occupied West Bank and Gaza Strip of today. This issue of al-Majdal, and the one that will follow, are dedicated to these Palestinian refugees whose stories are as diverse as their experiences of dispersal and loss as they have struggled to return.

In meeting rooms and conference halls, on high streets and university campuses, the Palestine solidarity movement is changing. In the dozen years following the signing of the Oslo Accords, few doubted the determination and resolve of solidarity campaigns, but there were fears that they were beginning to lose direction. Today, as we mark the fifth anniversary of the 2005 Palestinian Civil Society Call for a campaign of boycotts, divestment and sanctions (BDS) against Israel until it complies with international law, a truly global movement is rapidly emerging whose concrete forms of solidarity is not only changing the discourse surrounding the Palestinian struggle, but are also achieving concrete results towards the isolation of the Israeli regime.

Special Feature: Poetry and Prose on 62 Years of Nakba

The following are some of the pieces contributed by various poets and writers from around the world on the theme of sixty-two years of Nakba. Other contributions will be published in the Autumn 2010 issue of al-Majdal.

-- for the Intifada by Harsha Walia

-- We by Ghayath Almadhoun

From the BADIL Refugee Survey 2008-2009: Secondary Forced Displacement in Host Countries - An Overview

Many Palestinians who sought refuge outside their homeland experienced further forced displacement. With their right to a nationality, identity and travel document denied by Israel, they became stateless refugees[1] who have been particularly vulnerable to the impacts of armed conflicts and human rights violations in their respective host countries.

In the 1950s, Arab Gulf oil-producing states expelled striking Palestinian workers. When factions within the PLO challenged the power of the Hashemite Kingdom in 1970, vast numbers of Palestinians were expelled (between 18,000 and 20,000) and their camps demolished. This war, known as “Black September”, also resulted in the expulsion of the PLO from Jordan and its relocation to Lebanon.

Overview of Palestinian Forced Displacement in and from Lebanon 1948-1990

The Palestinian refugees in Lebanon – who numbered around 104,000 in 1948 – can be considered the largest stateless group of Palestinians received by a host state. Several factors have affected the demographic distribution of these refugees in Lebanon since the 1948 Nakba. In this article I will try to briefly highlight the main factors that determined the distribution of the refugees to different places within and beyond the borders of Lebanon.

The Ongoing Nakba in Lebanon: The Case of Nahr el-Bared Refugee Camp

Picture a drawing simply depicting a man flying through the air with a caption by a young Palestinian child that reads, "I wish to become Superman so I can help all people, and fly over the checkpoint without having to give him a passing permit or identity card."[1] Imagine another drawing, a collage made up of Arabic words and black paint to form a road with the caption, "One year after the battle, we are still waiting to return home."[2] These are not words and images from Palestinians in Gaza. Nor are they from Palestinians in Jenin refugee camp. They were created by Palestinians in Nahr el-Bared refugee camp in northern Lebanon in a book that chronicles the war on their camp in the summer of 2007, their displacement, and their fight for their right to return to their camp.

This book offers a ground-breaking and comprehensive survey of restitution-related legal materials never offered before in a single collection. The editor, Scott Leckie, an expert in restitution law, has gathered together 240 laws, cases and materials on restitution from around the world and organized them into a logically organized compendium. The goal of the book is to serve as a reference work on the law of restitution including international and national resources. The reader is taken on a world-wide survey of property-restoration schemes from locales as diverse as Rwanda, Afghanistan, Bosnia-Herzegovina, Georgia, Kosovo and South Africa, to name just a few. The international law sources include texts from international humanitarian law, international human rights law, international criminal law and the law of state responsibility and is a monumental endeavor to marshal evidence from around the world to demonstrate that restitution of property has become an accepted standard of international and national law, and a necessary component of stable and durable peace agreements.

My deeply imprinted spatial awareness of Palestine has always included rural Galilee, centered on my home village, Arrabeh, with such added urban images as the marketplace of Nazareth, Acre or Jerusalem. Beit Daras and Nuseirat refugee camp are now part of my Palestine, thanks to Ramzy Baroud’s account of the life, mostly in exile, of one of Beit Daras’s sons, Mohammad Baroud. Mohammad is just another human being with his share of joyful and sad moments. But he is also a Palestinian refugee with the run-of-the-mill Palestinian refugee’s experience of struggle, hope, sacrifice, loss, misery, disappointment and unfulfilled dreams of return. Except that the image Ramzy draws of his autodidact intellectual and inventive but contrary father is so intimate and so realistically human, with all that the term implies of excesses, shortcomings, and humor, that it is almost touchable on the pages of the book. By the time I finished reading his life story, the typical Palestinian saga, shaped and constantly impinged by violence initiated, maintained and reinforced at every turn of the road by events beyond his control, he is close enough to me for tears to stream down my face and for me to return to the portrait on the first page of the book to plant a kiss on his forehead.

Challenging History: Why the Oppressed Must Tell Their Own Stories

When American historian Howard Zinn passed away recently, he left behind a legacy that redefined our relationship to history altogether.

Professor Zinn dared to challenge the way history was told and written. In fact he went as far as to defy the conventional construction of historical discourse through the pen of victor or of elites who earned the right of narration though their might, power and affluence.

This kind of history might be considered accurate insofar as it reflects a self-seeking and self-righteous interpretation of the world by a very small number of people. But it is also highly inaccurate when taking into account the vast majority of peoples everywhere.

BADIL Statement on the Occasion of World Refugee Day and Release of: “Rights in Principle – Rights in Practice”

20 June 2010 – In 1947 as members of the newly-created United Nations engaged in vigorous debate about the future of Palestine, Arab diplomats who played an instrumental role in the development of Universal Declaration of Human Rights and the Convention relating to the Status of Refugees reminded their colleagues that the problem of Palestine was not a matter of ‘what to do with Palestine’, but rather, ‘a lack of regard for certain principles of international relations and human life, including the principle of self-determination, the principle of the right to live peacefully in one’s own home, and the principle of self-government in a democratic way’. Given the divergence of opinion about the best way forward in what would be the international organization’s first attempt to resolve a major issue of international peace and security, they suggested that the UN General Assembly obtain legal counsel from the International Court of Justice. A majority of members nevertheless rejected the efficacy of this approach.1

Peace Talks in the Shadow of Demolitions

Palestinian University Students and Youth Groups Commit to Sweeping Boycotts
28 April 2010 – In the lead-up to the Nakba-62 commemorations, Palestinian student and youth groups in Palestine and in exile issued a statement in which they committed to enforce a broad boycott of Israeli products and programs. "Economic, political, cultural and institutional normalization legitimize Israel's oppression of the Palestinian people by giving the appearance of normalcy to the relationship between oppressor and oppressed. This relationship is hardly one between equals as Israel continues to violate our inalienable rights, steal our land, and prevent refugees from our right of return in contravention of international law and numerous UN resolutions." The students also asserted their “right to resist Israel's oppression of the Palestinian people through all forms of resistance and in accordance to international law, including forms of civil resistance such as demonstrations, sits-ins and, boycotts of Israel.”