Israel and the Crime of Apartheid :Towards a Comprehensive Analysis (Issue No.47, Autumn 2011)

This issue of al M 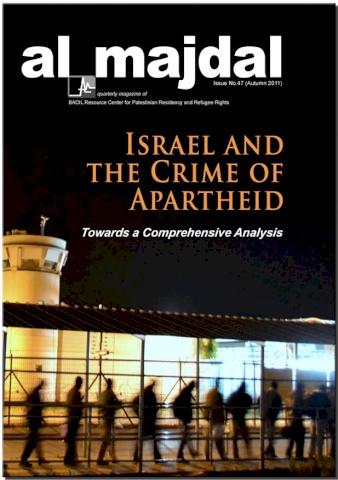 ajdal, and the one that will follow, will look at issues related to Israeli Apartheid from a number of vantage points. This first issue will include many of the testimonies to be presented at the Russell Tribunal in early November, with the later issue looking at the vision of the anti-apartheid movement.

In this issue, BADIL’s staff set out the legal context of the denial of the Palestinian self-determination and Max du Plessis provides background to the prohibition of Apartheid in international law. Professor John Dugard outlines his experiences under South African Apartheid and in Israel and the OPT. David Keane provides a background to the definition of racial groups in international law and Ingrid Jaradat analyzes this in relation to Palestinians as a racial group.

Towards a comprehensive analysis of Israeli Apartheid

On the morning of the 21st March 1960, thousands of black South African demonstrators converged on the police station in the township of Sharpeville as part of the anti-pass campaigns organized by the Pan-Africanist Congress (PAC). As the demonstrations ended, SA police opened fire on the gathering,  killing sixty-nine demonstrators and injuring several dozen others. The incident marked what would later be considered a turning point in the anti-Apartheid struggle marked by demonstrations globally, and the adoption, for the first time by the Security Council, of a resolution condemning the apartheid system and its attendant violence.[1]

Following the Soweto massacre in 1976, the United Nations departed from its practice, and by then growing legacy, of resolutions condemning Apartheid and brought into force the International Convention on the Suppression and Punishment of the Crime of Apartheid.

The Prohibition of Apartheid in International Law

Its preamble affirms that parties to the Convention are ‘[a]larmed by manifestations of racial discrimination still in evidence in some areas of the world and by governmental policies based on racial superiority or hatred, such as policies of apartheid, segregation or separation’.[2]  Article 3 then specifies the obligation of States parties to the Convention to oppose apartheid:

The Law and Practice of Apartheid in South Africa and Palestine

I spent most of my adult life in South Africa opposing apartheid, as an advocate, legal academic and, from 1978-1990, director of the Centre for Applied Legal Studies( a research institute engaged in human rights advocacy and litigation). In my work I compared and contrasted apartheid with international human rights standards and advocated a Constitution with a Bill of Rights in a democratic South Africa. Unlike many other South Africans, I was never imprisoned but I was prosecuted, arrested and threatened by the security police. My major book, Human Rights and the South African Legal Order (1978), the most comprehensive account of the law and practice of apartheid, was initially banned.

Elements of the Definition of Apartheid: Racial Groups under International Law

The movement toward international legislation against racial discrimination began as a response to a growing number of anti-Semitic incidents that took place in the winter of 1959-1960, known as the ‘swastika epidemic’. The incident, a spontaneous outbreak of graffiti and desecration of Jewish cemeteries that erupted in states as diverse as Costa Rica, Sweden and New Zealand, prompted a series of UN resolutions which culminated in the International Convention on the Elimination of All Forms of Racial Discrimination 1965 (ICERD). The pragmatic understanding of racial groups found in the Convention, the very first human rights treaty, reflects the fact that its origins are as much expressions of religious intolerance as racial discrimination.

Applying the crime of Apartheid to Israel’s regime over the Palestinian people: Are Palestinians a distinct ‘racial group’?

Apartheid is a severe form of racial discrimination. Several international law instruments define apartheid in similar terms as inhumane acts committed in the context of an institutionalized regime of systematic oppression by one racial group over another racial group for the purpose/intent of maintaining domination. As the Russell Tribunal on Palestine will examine, in its third session in Capetown, South Africa, whether and how Israel’s regime over the Palestinian people constitutes apartheid, it is necessary, among others, to determine who are the ‘racial groups’, and if Palestinians constitute a distinct  ‘racial group’ for the purpose of the definition of apartheid.

This document is a short version of the testimony regarding “Palestinian identity and Palestinians as a distinct racial group”, which will be submitted to the renowned legal experts and ‘judges’ of the Russell Tribunal in order to facilitate a fair and scholarly determination of whether the elements of the crime of apartheid are found in this particular context.

Under international humanitarian law (specifically, Article 66, et. al. of the Fourth Geneva Convention), an occupying power has the authority to establish "properly constituted, non-political military courts" to try residents of the occupied territory for offenses harming security and public order.

During the first days of Israel's occupation of the West Bank and Gaza in June 1967, Israeli military commanders established military courts in both territories with jurisdiction to try any person in those territories accused of committing an offense against Israeli Security (military) Legislation, some of which had already been used in trying Palestinian citizens of Israel since 1948.

This article provides a brief overview of the testimony that will be delivered by Addameer Prisoner Support and Human Rights Association at the Russell Tribunal on 5 November 2011 on the topic of denial of the right to life and liberty as an act of apartheid.

Under the International Convention on the Suppression and Punishment of the Crime of Apartheid, “denial to a member or members of a racial group … of the right to life and liberty of person,” if committed for the purpose of establishing and maintaining domination by one racial group over another racial group and systematically oppressing the latter, constitutes the crime of apartheid.

As the Director of the Israel Committee Against House Demolitions (ICAHD) for the past 14 years, I am intimately familiar with both Israel’s stated policies regarding the Occupied Palestinian Territory and its population, and its actual practices “on the ground.” Since my expertise lies primarily in the area of house demolitions, I would like to focus in particular on two articles of the Apartheid Convention: Article II(c) concerning measures calculated to prevent a racial group or groups from participation in the political, social, economic and cultural life of the country and the deliberate creation of conditions preventing the full development of such a group or groups, in particular by denying to members of a racial group or groups basic human rights and freedoms, including…the right to freedom of movement and residence; and Article II(d) regarding measures designed to divide the population of Israel/Palestine along racial lines.

Persecution is one of the crimes against humanity under international criminal law. As defined by the Statute of the International Criminal Court, it is “the intentional and severe deprivation of fundamental rights contrary to international law by reason of the identity of the group or collectivity” (Art. 7(2)(g) Statute). As with every crime against humanity, persecution is committed in the context of an attack on a civilian population, and must have widespread or systematic character. In other words, there must be a policy element behind the group’s deprivation of fundamental rights.

Most of the information about Israel's racist policies and actions concerns the situation in the Occupied Palestinian Territories, but in Israel proper, and in the Naqab desert in the southern part of the country in particular; such policies and actions have not stopped since 1948. In the last few years, due to lack of international interest and interference there has been an increase in human rights violations.

IGLYO moves out of Israel!
29th July 2011 - Palestinian queer groups welcome the decision by the board of IGLYO to withdraw their annual General Assembly conference from Tel Aviv, Israel. Since June 1st, a campaign to get 'IGLYO Out of Israel' was launched by Palestinian Queer Groups to protest the organization’s decision to hold its General Assembly in Tel Aviv, and accept funding from the Israeli government, followed by a call to boycott the conference after IGLYO declined to change its location.

The lack of territorial contiguity between the West Bank, including East Jerusalem, and the Gaza Strip, together with the building of the Annexation Wall, of Jewish-only settlements and of the segregated road system in the West Bank has physically fragmented the Occupied Palestinian Territory (OPT). The growing physical fragmentation of the OPT into enclaves is enforced through obstacles to freedom of movement implemented by Israel – such a checkpoints, roadblocks, trenches, road gates and other physical barriers-, further controlling and disrupting Palestinian movement within the West Bank.