Israel and the Crime of Apartheid: The Vision of the Anti-Apartheid Struggle (Issue No.48, Winter 2012) 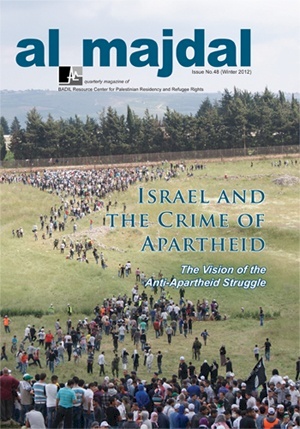 This issue of al-Majdal is the second of a two-part series on Israeli Apartheid, this issue takes a closer look at the vision of the growing anti-apartheid movement and explores various means of Palestinian resistance.

BADIL staff report on the recent South African session of the Russell Tribunal which unanimously held that Israel subjects the Palestinian people to a single integrated regime of apartheid.  This is followed by Simone O'Broin's commentary on the legal right to resistance in the context of a national liberation struggle against colonialism and apartheid.  Jeff Handmaker writes about the prospects for ending Israel's impunity regarding apartheid and other crimes, while Amjad Alqasis critically examines the obstacles faced by the architects of the Zionist project; how these obstacles were overcome; and how the apartheid system was established in the Israeli context as well as its overall aim. Adri Nieuwhof reflects on the lessons learned from South African apartheid, highlighting the importance of international support, co-ordination and BDS.  This is followed by Hazem Jamjoum's analysis exposing how Israel's denial of the right of return is a crucial component of the apartheid system, thereby highlighting the centrality of the refugee issue within Israeli apartheid.  Toufic Haddad draws attention to a significant change in terminology used by the United States, referring to the recent emphasis on the "Jewish State" and suggests ways activists can take advantage of the inherent contradiction in Israel's self-description as a "Jewish and democratic state".  Finally, Rifat Kassis from Kairos Palestine gives a Christian perspective on the struggle against apartheid.  The issue once again concludes with the recent successes of the BDS movement.

The Russell Tribunal on Palestine, in Capetown in November 2011, found that "Israel subjects the Palestinian people to an institutionalized regime of domination amounting to apartheid as defined in international law. This discriminatory regime manifests in varying intensity and forms against different categories of Palestinians depending on their location. The tribunal concludes that Israel's rule over the Palestinian people, wherever they reside, collectively amounts to a single integrated regime of apartheid."1 The tribunal also made a finding that, in relation to certain acts on the part of Israel, there is evidence of the crime against humanity of persecution.

The Russell Tribunal on Palestine was established as a result of calls from civil society, following the failure to implement the findings of the International Court of Justice's 2004 Advisory Opinion on the Legal Consequences of the Construction of a Wall in the Occupied Palestinian Territory and Israel's 2008-9 military assault on the people of the Gaza Strip.

Prospects for ending Israel’s impunity for apartheid and other crimes

It is very possible that the Arabs of the neighbouring countries will come to their aid against         us. But our strength will exceed theirs. Not only because we will be better organized and         equipped, but because behind us there stands a still larger force, superior in quality and        quantity … the whole younger generation [from Europe and America].

Apartheid—both petty and grand—is obviously evil. Nothing can justify the arrogant        assumption that a clique of foreigners has the right to decide on the lives of a majority.

Israeli apartheid: a means to an end, not an endgoal

The South African session of the Russell Tribunal on Palestine discussed intensively whether Israel’s practices against the Palestinian people constitute the crime of apartheid.1  The findings of that session concluded that Israel is committing the crime of apartheid against the Palestinian people. This Israeli apartheid regime is not limited to the Palestinians living in the occupied Palestinian territory (oPt) but it is also targeting Palestinians residing inside the “Green Line.” Reflections on whether a one or two-state solution would be the appropriate means to end the injustice and suffering in historic Palestine overlook the fact that one legal entity has already been established within that specified territory: the Palestinians, wherever they may reside, are collectively exposed to one coherent structure of apartheid. The main components of that structure discriminate against Palestinians in areas such as nationality, citizenship, residency rights and land ownership. This system was originally applied in 1948 in order to dominate and dispossess all forcibly displaced Palestinians, including the 130,000 who were able to remain within the "Green Line" and later became Israeli citizens. After the occupation of the remaining part of historic Palestine by Israeli forces in 1967, this territory became subjected to the same Israeli apartheid regime.

For many years I supported the anti-apartheid struggle in South Africa as a member of the Holland Committee on Southern Africa (HCSA). I apply what I learned in supporting the Palestinian people to achieve freedom, justice and equality including the right of return for refugees. Dutch and South African anti-apartheid activists provided input to broaden the basis of the article.

The people of South Africa developed a clear vision for the future that gave guidance to anti-apartheid activists and organizations. Thousands of volunteers collected countrywide the 'freedom demands' of the people.

Denial of Refugee Return: The Core Dimension of Israel’s Apartheid

On May 15, 2011, and for the first time since their expulsion in 1948, tens of thousands of Palestinians in Lebanon, Syria, Jordan and the occupied West Bank and Gaza marched toward the borders of the part of Palestine occupied by Zionist forces in 1948. Logistical organizers of each of these return marches had planned for symbolic actions in which participants were to stand near the borders, listen to flowery speeches about the right of return and the sanctity of the homeland, and then get back on their buses and return to their refugee camp residences. Many of these organizers remained near the platforms erected for the speeches, congratulated themselves on an impressive turnout, and delivered their speeches to empty chairs.

An important historical and strategic shift has taken place in regards to United States foreign relations with Israel that has yet to be given its proper due notice by political actors and commentators alike.

Public statements of the Obama administration have increasingly begun to adopt the terminology of the Israeli government with regards to defining Israel as a specifically "Jewish state" and as the "homeland of the Jewish people."

Kairos Palestine: The Struggle Against the Israeli Apartheid System

In December 2009, the Kairos Palestine Group - a group of Palestinian Christians comprising both clergy and laypeople - launched a document entitled “A Moment of Truth: A Word of Faith, Hope, and Love from the Heart of Palestinian Suffering.” In its essence, the Kairos Document is Christian Palestinians’ word to the world about the Israeli occupation and a call for support and solidarity in establishing a just peace in our region. This document is more than simply a text: it seeks to be a living initiative, a platform for discussion and action, a movement based upon and working towards the end of Israeli apartheid and the creation of a just peace.

Turks say can’t sell Israeli carpets
16th October 2011 - A Turkish Company has cancelled an order of two containers of carpets from Israel’s Carmel Carpets, saying it can’t sell Israeli products at this time. Each container is said to be worth some NIS 100,000 (about $26,700). The Bytex CEO asked to cancel the order for fear it would cause him financial damage and tarnish his image. Carmel Carpets has been in contact with this client for some 10 years. “We created a friendly, almost family-like relationship,” says a Carmel manager. “We approved his request in light of the circumstances and didn’t fine him. We hope relations will be resumed in the near future.”