Towards a Prognosis: Diagnosing Fragmentation and Problems of Representation in Palestinian Politics (Issue No.52 Spring 2013) 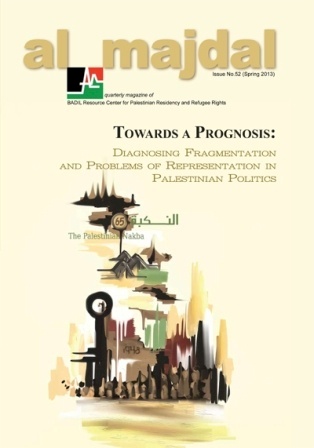 Towards a Prognosis: Diagnosing Fragmentation and Problems of Representation in Palestinian Politics (Spring 2013)

The 52nd issue of al-Majdal overviews the current phase in Palestinian discourse: where fragmentation and the crisis of representation are being dissected and analyzed. This evolutionary process will potentially yield remedies. Indeed, nascent steps towards remedy have begun. The task ahead is to develop and hone them towards a comprehensive and sustainable vision.

When  Palestinian  political  factions  and  the  Palestine  Liberation  Organization  were  seeking fighters [to participate in armed resistance against Israel], they suspended refugees’ democratic participation and instead requested their contributions in the armed struggle. Today, after the death of tens of thousands of Palestinian fighters, most of them refugees, and after the Palestinian leadership acquired international recognition and a kind of legitimacy, becoming well-known individuals, no political power is after the participation of the refugees, no one wants to listen to their voices, no body, no political party and no national or international organization has set a strategy for reactivating refugee participation.

Israeli practices and policies combine apartheid, military occupation and colonization. Together, the strategy aims at forcibly displacing the indigenous Palestinian people from the territory of Palestine (also referred to as Mandate or historic Palestine). Not limited to the occupied Palestinian territory, the Israeli regime also targets Palestinians residing on the Israeli side of the 1949 Armistice Line (known as the Green Line) and millions of Palestinian refugees through forced exile.

International Solidarity: A report from the World Social Forum – Tunis 2013

The World Social Forum is an annual meeting “[...] where social movements, networks, NGOs and other civil society organizations opposed to neo-liberalism and a world dominated by capital or by any form of imperialism come together to pursue their thinking, to debate ideas democratically, [to] formulate proposals, share their experiences freely and network for effective action.”[3] Usually the World Social Forum meets at the same time as its ‘great capitalist rival’, the World Economic Forum's Annual Meeting in Davos, Switzerland. This date is consciously picked to promote alternatives to the World Economic Forum’s answers to world economic problems.

In 1987, Palestinian activists were developing alternative and autonomous structures that would separate them economically from the Israeli military occupation. In one such experimental project in Beit Sahour, residents hoped to produce dairy products locally, as an alternative to the monopoly of the Israeli company Tnuva. The residents of Beit Sahour bought several cows for that purpose. A few days after the start of production, the Israeli army invaded the farm, arrested the activists, and closed it down. The activists decided to smuggle the cows at night and hide them in their houses, backyards, and eventually in caves in the surrounding mountains. The Israeli army went on a massive, four-year hunt for the 18 cows that represented autonomy for the Palestinians and a “threat to national security” for Israel.

Navigating the Void:Palestinian Youth Resistance in the Absence of Political Leadership

There  is  a  general  consensus  among  Palestinian  youth  that  the  Palestinian Authority  (PA)  is  a corrupt  body  and  an  impediment  to  mass  mobilization.  However,  awareness  is  tempered  by the  realization  of  insufficient  public  support  to  push  for  the  PA’s  complete  dissolution. Arab World for Research and Development (AWRAD), an independent research center,[1] cites in a February 2011 policy paper on “youth-based political vision” that while participants view the PA as “corrupt,” “structurally problematic,” and even an “economic investment project that benefits a small group of opportunists, instead of the national cause,” they also realize that it “feeds millions of Palestinians;” consider its establishment an important

The Arab Spring and Reviving the Hope of Return

It has been more than two years since a wave of revolts and demonstrations hit a number of Arab countries calling for dignity, freedom and justice. With persistence and determination protestors in Tunisia, Egypt and Libya succeeded in toppling their long ruling dictators, no longer tolerating being misrepresented or oppressed by tyrants. However, the main question we pose in this article is: with the change of political climate in the Middle East, what effect has the Arab Spring had on Palestinian refugees’ hope of return?

A Crisis of Representation:Debating the PLO on al-Shabaka and Jadaliyya

As in 1993, the 'crisis of representation' continues to draw urgency and attention from the Palestinian public.[1] In the post-Oslo era, the refrain refers to the Fatah-Hamas rift, general elections and the Palestine Liberation Organization (PLO). Over the past year leading English-language** websites such as Jadaliyya magazine and al-Shabaka: the Palestinian Policy Network have hosted discussions around the basic value of the PLO and its legislative body, the Palestinian National Council (PNC).This article will survey some of the most recent contributions to this debate aiming to highlight the main ideas wielded for and against elections to the PNC by contemporary Palestinian thinkers. I will review positions put forward in the 1 May 2013 al-Shabaka roundtable: “An Open Debate on Palestinian Representation”[2] and, to a lesser extent, the Jadaliyya “Roundtable on Palestinian Diaspora and Representation” published on 11 September 2012.[3] Additionally, I will reference individual articles addressing this theme published over the past year on the two platforms.[4] In order to leave the ‘crisis’ behind, deciding on and building a political strategy is the main task before Palestinians.

Solving the “Problem of Palestine”: Arguing through Reason, Law, and Emotion Void of Strategy

Palestinehas long been considered a problem. Even when people refer to it as an issue, as in “the Palestinian issue” [al-qadiyya al-filastiniyya], it is “the Palestinian problem” that they really mean: how to divide the land, how to keep the people divided, how to stop the violence, what to do with the refugees?

In early September 1993, weeks before the signing of the Declaration of Principles setting out a political framework for a negotiated solution to the conflict over the future of mandate Palestine - i.e., Israel and the 1967 occupied Palestinian territory - more than 100 Palestinians from various walks of life issued a public statement warning that "decisions on issues that are crucial to the destiny of the Palestinian people [were] no longer [being] made by Palestinian institutions".[i] For many, the subsequent decision not to bring the Declaration before the Palestine National Council (PNC), the Palestine Liberation Organization's (PLO) highest policy-making body, for discussion and approval exemplified their concern. The transfer of PLO cadre and resources to build a nascent Palestinian state in the Israeli-occupied West Bank and Gaza Strip and the delegation of PLO responsibilities to a newly-established self-governing Palestinian Authority (PA) there with limited powers and  responsibilities further underscored growing concern about the PLO's ability to represent the rights, interests and aspirations of the Palestinian people as a whole. With more than half of the entire Palestinian people residing outside of the borders of historic Palestine, activists, academics and  policymakers alike increasingly began to speak of a "crisis of representation" central to which was the exclusion of the vast majority of Palestinian refugees from decisions affecting their future.

Nothing Less Than Freedom:A Response to the Destructive Myths of Rev. Andrew Love

Rev. Andrew Love is a United Church of Canada minister who has started a campaign to get rank-and-file members to reject a proposal from the Church’s hierarchy to launch an economic boycott against Israel following the call of Kairos Palestine. Rifat Kassis, Kairos Palestine General Coordinator, responded to some of Rev. views expressed in a lecture held by him in Canada for church members.

On February 4, 2013, Andrew Love, a minister in the United Church of Canada (UCC), gave a presentation at the Rideau Park United Church in Ottawa, Canada. Rev. Love argued against recent calls for boycott of the SodaStream company, which has its headquarters next to Ma’ale Adumim, one of the largest illegal Israeli settlements in the occupied Palestinian territory (oPt). His talk developed into a broader critique of the UCCs stance on Israel/Palestine – or, better put, into a defence of the Israeli occupation itself.